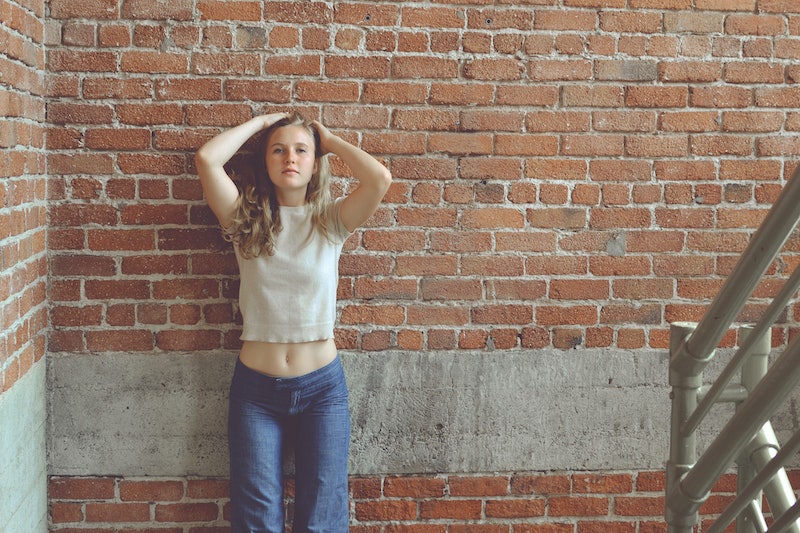 Vaginas are so mysterious and magical and infinite. By comparison, they seem that much more magnificent than penises, which are totally...well, there they are. Not that I'm throwing shade! I, personally, am a big fan of penises. However, we're talking about how vaginas are awesome here, which frankly, gives us a lot more to discuss than we would if we were having a conversation about the many ways in which penises were amazing. They're cool, but in way fewer ways. VAGINAS! Although they are unarguably incredible organs, they're still a little weird in their own breathtaking ways.

Have you ever taken a really long, hard look at your own vaj? A lot of women never do, and that's so strange to me. Not that I book whole heaps of time scoping my own, but I've looked and look every so often, yeah. It's part of your body! And a kind of important part, at that. In most arenas, I don't really buy the whole "every person is a special snowflake" spiel but truly, this does apply to vaginas since they vary so wildly and that's actually super cool. As such, each woman has a different about on her vagina: the way it exists between her legs, the things that come out of it, the things that go in... it's a lot to consider and even more to properly digest.

With all of that in mind, there are a lot of weird things about owning one of the vagina things. Here are a few women revealing the oddest part of having a vagina:

Cool joke, Rose! It's your vagina so that means there's no escape ever! Also, vaginas are naturally wet, for the most part. That's just part of the deal. Normal vaginal discharge as a sort of self-cleaning method (vaginas really ARE amazing). Still, very strange. And a lot of women agree that, when you think about it, vaginal discharge is weird:

"Definitely the clear ovulation goo. It reminds me of the sticky stuff behind address labels on magazines." — Alex, 25

"The consistency of the stuff that comes out of it, and its wetness/dryness is the weirdest. Seriously, one day, it'll be like Niagara Falls down there, but two days later, it's the damn Sahara." — Lexi, 23

"Underwear gets stuck in there and gets covered with goopy fluids. Gross!" — Joan, 28

Queefs are...yeah, weird as hell. But in reality? Queefs are just air in your vagina, so NBD! They happen all the time—during yoga, sex, literally walking around. Clearly I'm not the only left a little perplexed regardless:

"I'm torn between the fact that they have such a delicate balance of pH and the whole queefing thing. They both make sense. but it's just bizarre! Also, the whole being able to birth a child and go back to normal aspect." — Anna, 23

"When you notice how it changes in scent throughout the month and you fight to admit to yourself that you kinda enjoy it." — Katie, 23

"Damn—all the things I'm thinking of are natural, not weird. But for the sake of the survey, I'm gonna go with queefing. Not weird, just awkward (and natural)." — Samantha, 40

Most women get used to blood literally blasting from their crotches every month but that doesn't mean it's pleasant or "normal" feeling.

"Knowing that every month you are shedding an empty baby shell." — Amy, 27

"Shedding the lining of my uterus. I imagine it's even weirder if you have an endometrial cast and the whole thing comes out at once." — Maddy, 28

"Walking around with this organ that things leak out of. You're just supposed to go about your day and do all of your things without being distracted by the sensation of liquid leaving your body. Or you can avoid that sensation by essentially inserting a stopper into yourself, like you're a half-consumed bottle of pinot noir, not a human being staring down six back-to-back meetings. And half of the human race has no idea what this feels like so we operate like it's not a thing. And the half of us who know it's a thing because we're the pinot noirs are so used to it by now that we don't acknowledge it, either. So it's like it's not even happening except IT IS HAPPENING." — Alyssa, 32

"Periods. Your guts are basically falling out, but you have to go about your business as usual." — Jaquelynne, 25

Literally the scariest and most phenomenal things female bodies can do.

"If by weird you mean awesome, sacred, life-changing, and life-GIVING, I'd say having a human come out of it!!" — Leah, 33

"Childbirth. I haven't done that before but I hear from women who have had children that it's the weirdest thing ever." — Daisy, 28

"Misogyny and unequal pay is pretty weird. Also, the fact it's so elastic. It stretches to accommodate squeezing out a baby, and yet in most cases, it has no trouble contracting back to its original size." — Catie, 25

Because obviously, the awe is never ending. Unlike this post, which ends after this segment. But keep the wonder rolling, y'all! Vaginas ARE magic.

"It has a totally separate life, agenda, force than I might, and we share the same space. Dudes are like "random erections, algebra class!" But having a vagina is random erections, random secretions, random pain. Forever. I've spent years inspecting my vagina from every possible angle and still. I'm able to predict my menstrual cycle to a reasonable degree of accuracy but damn. Everything else is still a total mystery. What drives the woman downstairs? Sex? I haven't had any baby fever. Hatred of my social life? I have a feeling I'll go to my grave not understanding." — Jasmine, 26

"Weird and inconvenient. Having to make sure there is no toilet paper residue down there. Nothing like some toilet paper gunk to ruin some potential head." — Hannah, 23

"Having a vagina is like having to carry around a high maintenance model. You always are worried about what fabrics you put on her. What styles look best and she always has to have the best clothing. You have to be careful with cutting the hair. You have to be sure to take her to the doctor often to check for diseases. You can't just shove things down her throat, but sometimes you have to." — Virginia, 25

"When it gets really hot, my underwear gets wet and smells like pee but it's not pee, it's sweat. Other weird things: I'm always wet/lubricated, which I don't think is something that happens for everyone. Also, I sometimes think the reason women historically wear skirts is for easy access to the vagina, which is maybe one of the only times in history we've worn clothing in order to access the part we're covering." — Resa, 33

More like this
12 Aphrodisiac Desserts To Spice Up Your Valentine’s Day
By Kaitlyn Wylde
25 Inspiring Quotes From Black Women To Celebrate Black History Month
By Kyli Rodriguez-Cayro and JR Thorpe
18 Hinge Prompt Answers To Try If You’re Looking For Something Casual
By Lexi Inks
The 8 Best Crystals For Meditation, According To A Healing Energy Practitioner & Meditation Teacher
By Lauren Moison
Get Even More From Bustle — Sign Up For The Newsletter
From hair trends to relationship advice, our daily newsletter has everything you need to sound like a person who’s on TikTok, even if you aren’t.