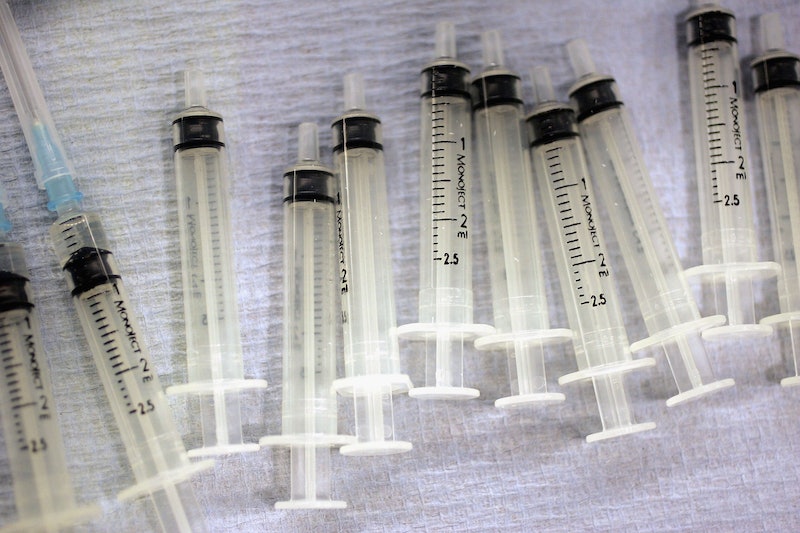 Genital herpes is about to get its ass kicked: After promising mid-stage trials, the "off-the-shelf" vaccine HerpV could soon be widely available for sufferers. The drug's power is twofold: it not only reduces the risk of spreading the virus — and women are twice as likely to contract genital herpes than men – but also make symptoms of the condition less severe. Developed by Agenus Inc, the vaccine contains the QS-21 Stimulon adjuvant which boosts specific immune responses. At trial, a triple injection of HerpV prompted a 15 percent reduction in the release (ie. contagious-ness) of the virus, as well as 34 percent decrease in severity for suffers.

The 12-month trials involved 80 patients with various types of herpes outbreaks: 70 were given HerV, and 10 a placebo. The developers are expecting further data in early 2014, which could see the drug even closer to hitting shelves. This is good news for the 776,000 Americans who catch the sexually transmitted disease every year; an estimated 50-60 million Americans are chronic sufferers. And it's great news for Agensus Inc, whose shares skyrocketed by 32 percent in premarket trading.

Genital herpes is a sneaky condition: most people have mild or no symptoms at all, but when they do occur they manifest themselves as painful blisters, in what is probably the last place you'd want them in. Oh, and the really bad part - sex during these outbreak can increase the risk of catching HIV.

It's a pretty sexist disease. A total of 16 percent of the American population age 14 to 49 years are estimated to have genital herpes, although the rates are significantly higher for women — one in five, compared to one in nine men. As is almost always the case with STDs, it's easier for women to catch something from infected men than vice versa (because life just isn't fair). The symptoms may be worse for us too, as the sores can occur on the cervix as well as inside the vagina.

Now that we've got the promise of a future HIV vaccine, not that mention the superhero HPV shot that protects against cervical cancer, we're just waiting for science to immunize us against chlamydia, gonorrhea, syphilis, and all the other nasty diseases out there. Until then, the condom is still your best friend.