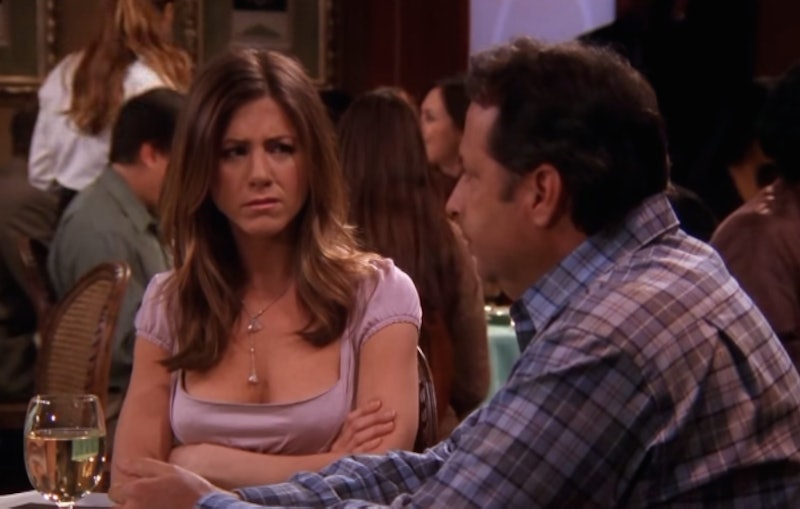 I might be happily and smugly coupled now, but there was a time when I went on bad date after bad date. I got to the point where I became expert at making a swift and unexpected exit without ruffling any feathers or hurting any one, so much so that my walking away when it just wasn't happening became methodical. There were excuses and smiles and thank yous, but I always refrained from saying "we should do this again some time," which is essential to avoid at all costs when you leave a bad date early.

I've been on dates with racists, completely un-talkative yet weirdly bitter New Yorkers, creeps, and dudes who would just not stop name-dropping. My dating advice is: Always go on a first date (at least with a stranger you don't know well) as "drinks". That way you can have two and leave without being awkwardly roped into a long dinner or other activity. Starting off casual is the best way to ensure you can leave easily when things go south, which in this day of online dating and Tinder, is likely to be a thing that happens to you at least once, if not frequently.

Here are six ways you can end a date early when you know it's just not happening. They're not all honest, but sometimes you're too awkward or sensitive to hurting someone else's feelings to be brutal to their face. (Also, I once had a friend who was honest about a bad date and the date reacted angrily and poorly, so I understand sacrificing honesty to save yourself the fear and humiliation that can come from a stranger acting out at you.) Once you've extricated yourself from the date, you can always go back and make a much less awkward phone call or an even less awkward text to say you won't be seeing them again (because it's never okay to lead someone on!) Regardless of your excuses and your excuses for your excuses, life's is too short to stick around and listen to someone talk about that one time they met Axl Rose for 4 hours.

1. Go in with a clearly defined exit plan

How you frame your date is important. If you're going out with someone you don't know if you're going to like (remember, this doesn't apply to long-standing crushes or going out with people you already know), make sure you start off with an excuse to leave. Tell them you can do drinks, but that you have an early morning, or that you have to meet friends afterwards. One of my favorites is when the L train stops running early. It's the perfect excuse because it's true. This way, you can use your pre-prepared excuse to leave if things go badly. And if they don't, you can say, "Ehhhh, don't worry about it!" and stay.

2. Have your friends waiting nearby

It's always good to let someone know where you're going and what your plans are, just for safety reasons, but if your friends are out and about, plan your date so you're close by. That way, you can "run into" each other, and be asked to join up with them, completely diffusing your bad date, and allowing you to socialize in a group rather than one-on-one, if one-on-one wasn't working out so well.

3. Get one of your friends to call with an emergency

If you really need an obvious, hard exit, nothing says "I'm leaving now" like a fake phone call from a friend or family member saying there's been an emergency. I'm going to be honest: if someone pulled this one on me, it would be extremely obvious what they were doing, but you're trying to get out of a date, not win a Nobel prize in diplomacy.

4. Have a very demanding "job"

Once, midway though a date, I found out the guy I was seeing was a total racist. He told me he didn't like "the way Asian people talked, or the way they smelled." It wasn't that he didn't like loud people, or smelly people—he specifically didn't like Asian people and these were the reasons he gave. Shocked, I mulled it over as the date continued for another thirty minutes, at which point I came up with the bright idea to tell him my boss had emailed me with a pressing deadline and I had to go home and write up an article immediately. Being a freelance journalist is a brilliant excuse because THE NEWS NEVER STOPS, but any other equally demanding job can be used as a really great excuse to leave.

You have to set this one up early, the second you start feeling like you might want to bail. Eventually, your sickness will overwhelm you to the point you have to leave. Don't be melodramatic, but give yourself a healthy migraine or nausea. If you're a straight woman, "sore tummy" will often be interpreted as "menstruating" which freaks dudes out so much that they won't even question you.

I've been on dates where the only thing to say is, "I'm really sorry, but I have to go. It was nice meeting you." And that's totally fine. It's not an easy thing to say, and all the above excuses are things I've done so I don't have to be so frank. But generally, being honest is the best, clearest and least elaborate way to end a bad date. God speed.