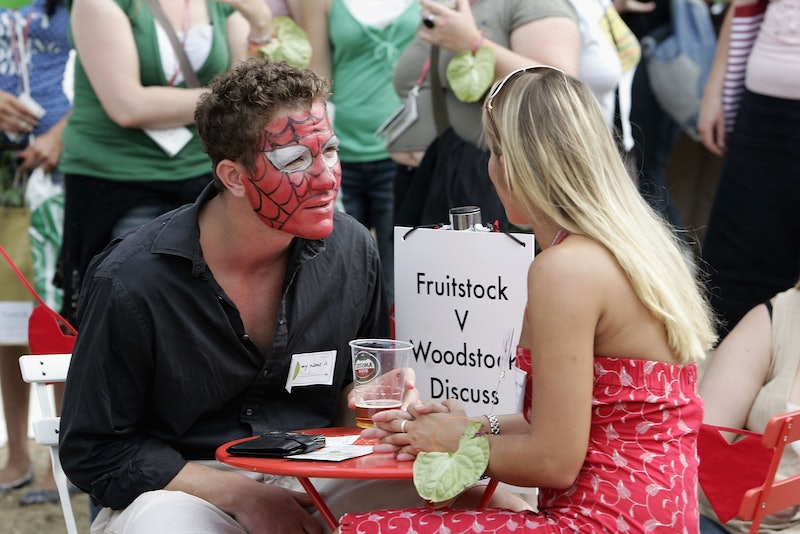 At some point in life, our day-to-day fears transition from "what if I get trapped by the monster living in my basement?" to "what if I get trapped on a really bad date, with someone who lives in a basement, and wants to take me there to show me their Band-Aid collection?" Bad, awkward, and bizarre dates haunt our grown-up nightmares because they can have ramifications far beyond the moment (you know, the one where you leaned in for a kiss, and he tried to turn it into a handshake). Bad dates can leave you feeling like a loser, make you terrified of your own judgment, or lead you to book a week at a silent meditation retreat in Taos, so that you can "figure some stuff out."

OK, fine. Bad dates often made me try to book a week at a silent meditation retreat in Taos. But going on a bad date on Friday doesn't have to lead to a shame spiral on Saturday. As Emi Soekawa and Jessie Male, founders of the blog and storytelling series Bad Date Great Story, explained in a recent interview with Bustle, bad dates can actually be a great way to learn about what you really want from romantic relationships. The pair — who've been dissecting bad dates online since 2010 — were motivated by their own post-date commiseration sessions, where they'd discuss their love lives and try to figure out why they seemed to be going on, as Male put it, "bad date after bad date after bad date."

Four years of analyzing not just their own romantic foibles, but those of a myriad of comedians and writers who've appeared on their series, have led the two to view bad dates not as confidence-eroding catastrophes, but as opportunities to change habits and beliefs that may not be serving you well. Bad dates can help you "figure out who you actually want to be with, and who makes you happy," says Soekawa. "Bad dates are an opportunity to clearly think, 'this is the opposite of what I want.'"

So you don't need to keep panicking over that time you ended up going for pad thai with a guy who told you that he was "into human skulls" (OK, fine, that was me, again). Instead, you can read about seven awesome dating lessons that you can only learn from your creepiest, crappiest, or most skull-filled bad dates.

1. KNOW THAT YOU DON'T HAVE TO FEEL BAD ABOUT A BAD DATE

For many of us, the natural instinct after finding ourselves stuck on a bad date is to curl up into a ball, pillbug-style, and wait for the healing waters of time to wash away our pain. But actually, rehashing the date with friends can help, making the date feel "not sad or weird," says Male. Discussing bad dates can also take away their power — if you're with your friends, shit-talking the guy who nonchalantly showed you the hole he punched through his bedroom door (which actually happened to Male), it's no longer only a scary experience that you endured alone — it's now a collective experience that your friends can help you process, cope with, and when the time is right, roll your eyes at.

"A lot of bad dates happen because you saw the red flag and then you thought, 'Eh, that's OK,' and ignored your instincts," says Male. "Bad dating for me has really taught me to trust my instincts." Going over a bad date after the fact, and pinpointing what really rubbed you the wrong way can help you figure out what your instincts tell you, and how — which will not only steer you out of more bad dates, but also potentially bad relationships down the road.

And building up your instincts isn't just helpful in avoiding creeps. Getting more familiar with your gut can also help you find a partner who clicks with you. When Male met her boyfriend (both she and Soekawa are now in serious relationships), she immediately felt instinctually positive about him, and "I don't know that I would have been able to so clearly identify that positive gut reaction if I hadn't had some moments in the past when I ignored my instincts that someone was not a good guy...and then wound up in a bad date scenario."

3. FIGURE OUT WHAT YOU ACTUALLY WANT

Bad dates can help clarify priorities—by showing you exactly what you don't want. When I was younger, I thought that all I wanted was to be in a relationship with a writer whose work I admired. But after a bad date or 12 with guys whose writing was a lot better than their personalities, I realized that what I actually wanted was someone who felt passionate about their life's work and would respect my ambitions—qualities that had nothing to do with being a published writer.

My dreams of being with a professional writer weren't only kind of dumb and shallow—they actually bore no direct relation to the qualities I was looking for in a guy. But I couldn't understand that until I wasted a few years chasing after published writers. Today, I have those jerk-hole writers to thank for forcing me to broaden my dating horizons, and eventually leading me to my own boyfriend (who is passionate, respectful, and not a writer). Don't let the jerk-holes who have crossed your own romantic path fill you with rage—allow them to guide you towards the kind of person you really want to be with (but you can also be filled with rage if you want).

4. LEARN THAT FORCING A DATE OR RELATIONSHIP NEVER WORKS IN THE END

"A lot of bad dates come from trying to make something that isn't happening happen," says Soekawa. "Like when you just want to be in a relationship, or you date someone that you know isn't going to work out for you, just to date someone." Feeling exactly how awkward it is to force interaction on a single bad date can help illuminate how unfulfilling it is to force other, less obviously awkward things—like a relationship that's way past its expiration date—and encourage us to trust our own guts about whether things are actually working.

5. KNOW THAT SOMETIMES, THE PROBLEM IS YOU

Analyzing bad dates isn't all just about pointing fingers at others (although that is really, really fun to do). Sometimes, the person making a date terrible is you. Male had this experience soon after college, when she accepted a date while in the midst of a prolonged break-up, and then admonished her date for trying to kiss her. Looking at your own dating behavior, and realizing that a few people have probably described your own foibles to their friends over mimosas the next day "does teach you the art of forgiveness" and develop your empathy, says Male—a skill essential to making it through literally any phase of your romantic life.

6. REALIZE THAT BAD DATES AREN'T ONLY CAUSED BY BAD PEOPLE

Most bad dates aren't even necessarily about not being compatible—they're about "awkward communication," Soekawa notes. Resisting the urge to vilify someone who took you on an awkward date—or yourself for being awkward—and simply chalking it up to miscommunication can be a balm for your ego, and will help motivate you to keep getting back out there.

7. AND NO MATTER WHAT, THERE'S ALWAYS TOMORROW

Even if none of this makes you feel better about that date you went on with a guy who told you he was so busy on Twitter he couldn't go out again, but who actually turned out to have a girlfriend (which also happened to Male), it helps to just take life one date at a time. "People put expectations on themselves" that end up sabotaging them in the end, says Soekawa, whether through bullshitting a potential love interest, or simply being too nervous to date. And as terrifying as all this stuff can make dating sound, the point of sharing and talking about bad dates "is not that dating is horrible and that you're gonna die alone," says Male. "It's that dating is really hard, and you're gonna go through a lot of negative (yet potentially hilarious experiences). But ultimately, it's possible to meet a good person who's the right match for you." And all dating experiences, good and bad, bring you closer to the place that you need to be. Hell, maybe one day you'll be writing your bad dates thank you notes for helping you figure out the person you really wanted to be with.OK, probably not. But at least all this can help make the next bad date you end up on significantly less scary than that monster in your basement. Unless it's a date with the monster in your basement. Damn you, Tinder!