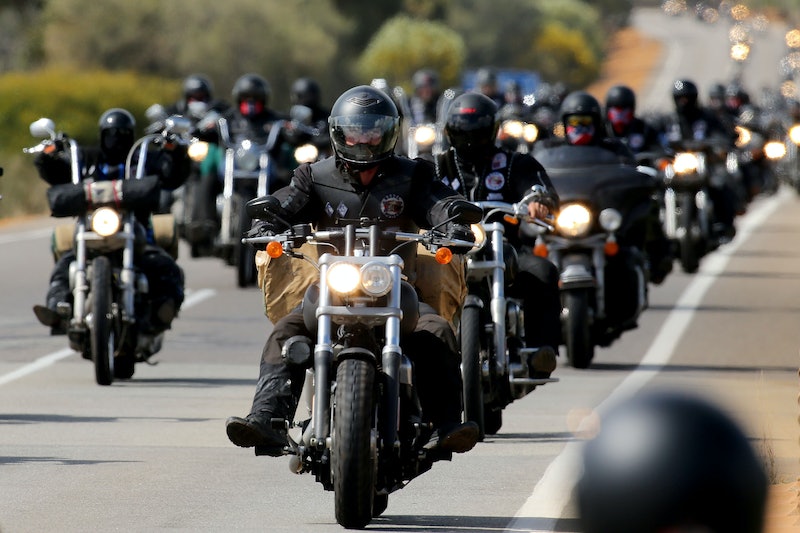 Motorcycle club vs. biker gang — whatever terminology you want to use, getting an official invite into one of these organizations just might be tougher than making a Vegas VIP list. Sunday's deadly shootout that left nine bikers dead, at least 18 people injured, and around 170 arrested in Waco, Texas, has brought new attention to motorcycle clubs and their secretive brotherhood. So how exactly do you join a motorcycle club?

These days, when you hear "motorcycle club," it's easy for the FX show Sons Of Anarchy to come to mind. The hit series, which lasted for seven seasons, offered a romanticized view of these organizations and included funny bits of would-be members toiling away at menial tasks just to get a coveted seat at the table. While TV often doesn't do real life justice, when it comes to motorcycle club recruitment, that part might be true.

To join a MC, you usually have to ask a member. If you check out the Outlaws Motorcycle Club's website, the homepage clearly says, "DO NOT write us asking how to join! Find an Outlaw and ask him!" The all caps might be a little off-putting, but I'm interpreting the two exclamation points as signs of friendly encouragement.

For one of the world's biggest MCs, the attitude is definitely more along the lines, "The first rule of a motorcycle club is you don't ask about the motorcycle club." No, we did not just step into a scene from Fight Club. If you want to earn a Hells Angels' jacket, you're going to have to figure it out yourself, according to their "helpful" FAQ page, which gives this answer on how you can join their club.

If you have to ask, you probably will not understand the answer.

Yup, that's it. But in all seriousness, the website says a Hells Angel member is a "true motorcycle enthusiast" and clocks in more than 20,000 kilometers a year since the bike is the main mode of transportation. Each local chapter's requirements will vary so the website recommends you to ask a member. And if you don't know where they are?

If you have to ask where the nearest Charter is… you are not ready to join our Motorcycle Club.

And if you want to create your own charter?

If you have to ask, you probably will not understand the answer.

It's not hard to imagine other MCs using the same recruitment code for their membership. For the Bandidos, which are the Hells Angels' main rivals and one of the primary participants in Sunday's shooting, the process to join can take years. According to a National Geographic special that looked at the infamous club, a Bandidos hopeful usually has to pass three stages — "hangaround, prospect, probation" — before becoming fully patched in. That will typically take at least two years.

Once you're accepted, a Bandidos' membership will cost you $275, paid to the national treasury. You'll have to provide an additional $275 for a new patch. If your bike is out of service for 30 days, you have to cough up $500.

A motorcycle club's membership is pretty exclusive, and you'll probably have to spend a lot of time and money to join. Whether that kind of fraternity is worth it to you, that's for you to decide. But keep this in mind — often, the biggest MCs are involved in some pretty criminal stuff, at least according to the FBI.

More like this
Which Cast Member of 'Westworld' Season 4 Has the Highest Net Worth?
By Meg Walters
Where Was 'The Bachelorette' Season 19 Filmed? More European Destinations Are On The Way
By Radhika Menon
7 Things We Learned From Rebekah Vardy's First Post-WAGatha Christie Interview
By Sam Ramsden
What We Know About Where Caroline Watt Is Now
By Catharina Cheung
Get Even More From Bustle — Sign Up For The Newsletter