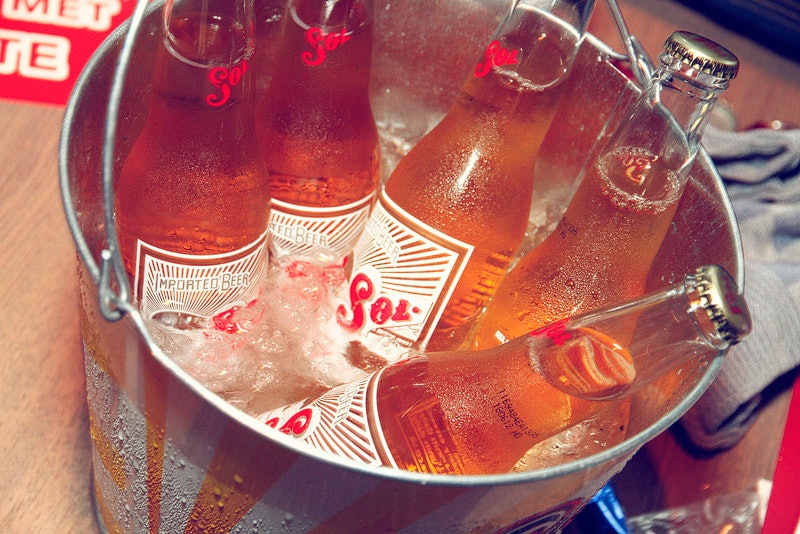 If you are like most people, the first thing you'll do when attending a Memorial Day party is head to the cooler and pick out a random beer that you have never even heard of before, yet cherish because it's free. Even if you don't like beer, you acknowledge that day drinking on Memorial Day is better with a few brewskis in hand — after all, nobody sits around sipping on cosmos while hot dogs are burning on the grill. While it's amazing to let loose all afternoon on one of those rare days your work actually acknowledges as a holiday, it's also good to remember that your body might not know how to handle hours of booze intake. Something about the hot sun and the joy of hanging out on someone's lawn on a Monday will probably make you grab two, three, or possibly 12 beers, even if you're not a big drinker. You're seizing the moment, man.

However, even if you consider yourself to be a heavy drinker, you might not have mastered the art of day drinking. Before you let loose, here are some things you should expect if you plan on hitting the early train to inebriation central.

Drinking beers with the neighbors is a bonding experience. All of a sudden, you'll have much more respect for the neighbor who plays his drums in his garage at 9 p.m., and the guy who is super lax about cutting his lawn. Today, you connect with these weirdos since all of you have two things in common — you're all a little tipsy, and you all love America.

2. You'll have at least three (but possibly nine) of the tastiest burgers and hot dogs in the entire world.

Moderation goes out the window when alcohol is being consumed, so chances are you'll load your plate with the finest grill food ever. And it'll taste amazing. "Why do we always boil hot dogs in a pot?" you'll ask yourself loudly. "Why don't we splurge on a George Foreman and let summer live on forever?"

Alcohol makes you tired. You'll be wondering if it's a social faux pas to take a nap on the outdoor furniture, or if you should just call it a day and go back to sleep in your own bed. Even downing a soda or two will somehow maximize the exhaustion, even though caffeine has rarely failed you before. You're bound to feel old, wondering where your college spark has gone.

4. You'll forget the names of coworkers and neighbors your cousins invited immediately after they tell them to you

Barbecues usually gather a weird array of strangers, and you're bound to be introduced to a few of them. "This is so-and-so! He did the thing with that guy!" You know that it's polite to only re-ask once, so you're secretly hoping that these new people aren't a fixture at parties to come, just to spare you some embarrassment. Between the booze and being overstimulated by so many sights and smells, your memory has just gone out the window.

5. You'll hear someone's sad life story, which you'll have no actual advice for

Bonding over beers will likely bring some meaningful conversation. They'll also pigeonhole you into a chat with someone that downright depresses you. After they tell you about how they just got laid off based on their company's grim financial situation, they'll tell you how applying for jobs "just isn't the same anymore," and "how much easier this would be" if they were "in a relationship with the right person." After drunkenly trying to encourage them to stay optimistic, they hit you with the news that their father's health is rapidly declining, and how his father always viewed him as being a disappointment. Woof.

6. You won't be able to truly sense your own drunk level

Are you drunk, or are you just warm? Should you have another, or will that be the drink that'll make you incapable of walking in a straight line? When you're drinking outside, beer goes down as easily as iced tea. Plus, with all the walking and socializing, you might have walked off your drunk by now, right?

7. You'll be motivated to actually participate in lawn sports, and not just watch from a safe distance

You see your friends playing cornhole and horseshoes, and you can't help but join in. Typically you're awful at these games and serve as the cheerleader, but today? You're going to win and prove to everyone that you have some semblance of athleticism. You're smart enough to avoid the potato sack race, since anything that involves coordination is just asking for trouble.

8. You'll lose track of the time, pretty much all day

It's 6 p.m., but it truly feels like 8 or 9. You'll also forget that it's Monday, and have brief panic spells where you question whether or not it was actually a work holiday today. You might be tempted to call in, but it's too late at this point, and you don't want to be known as "the girl who drunk dialed the office on a holiday."

9. Your tweets will be way more boring, but your Instagram will be on fire

Burger photos get likes. So do beer photos. You've already posted several of each. But trying to drunkenly live tweet the barbecue will be a mistake you'll only realize later on. I mean, unless the grill turned into a ball of fire based on a flare up, nobody will really care about what's happening. They have their own parties to attend. And "Guys, I just said Amstall Light instead of Amstel, LOL!" is more of a "you had to be there" quip. You'll probably realize this tomorrow, or after the random 8 p.m. nap you're bound to take.

10. You'll take a night shower, even if it's not in your normal routine

When you're back home, you'll feel like you smell like a sweaty brewery — even if you really paced your intake. The shower will further screw up your schedule, and probably (but hopefully not) give you a second burst of energy. Despite a day of being exhausted, it'll be hard to actually get to bed on time.

You did everything right, by eating greasy food and occasionally taking a sip or two of water in between your Coronas. However, that doesn't change the fact that you've been drinking for like, eight straight hours. The last time you did that was on your 21st birthday, when a hangover was a sign of accomplishment. Now? It's an obstacle that — hopefully — can be tackled by coffee.