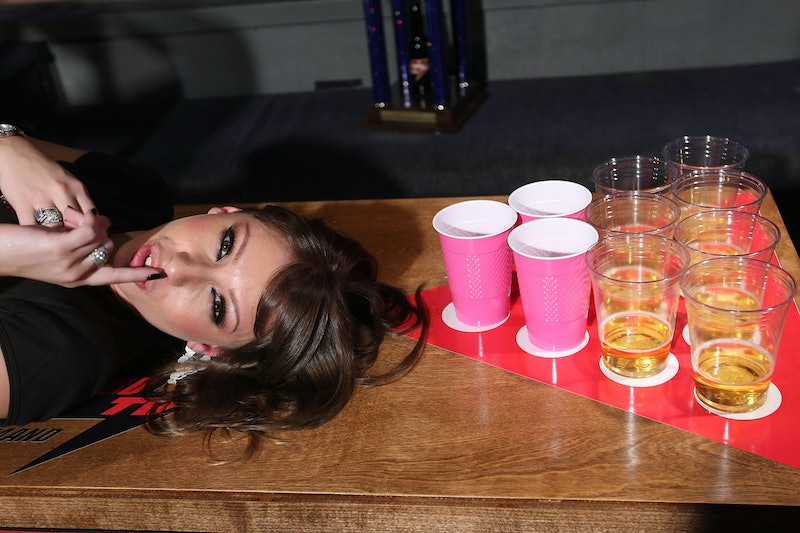 The day I graduated college, it was as if the younger, more physically resilient version of myself drifted out of my body and flew up towards University Heaven where the PBR flows forever and cheap vodka floods the streets. And as for the real-life version of myself that was left on earth that fateful day? Well, I can't drink for shit anymore, and that's the hard, cold truth.

Once you leave college, your days of playing Survivor Flip Cup until four in the morning, stuffing your face with microwavable mac 'n' cheese, and then sleeping off the hangover until you wake up in the afternoon feeling as good as new, are few and far between.

Unfortunately, a 2 p.m. dining hall breakfast of eggs, pancakes, and bacon won't make you feel better anymore — food will just give you enough energy to climb back into your bed and retreat into a world of headaches and dehydration. And if you're anything like me, then after a night of heavy drinking, you'll no longer be able to do anything except curl up into fetal position on your couch and get Cheez-It crumbs all over yourself while laughing at something cheesy Chandler said to Joey. (It's a sad image, I know.)

But that's just what happens when you try to drink like a college student when you're — in fact — no longer a college student. Now that we're adults, we tend to drink like, well, adults. Fridays and Saturdays are filled with dive bars, wine spritzers, and "only one drink with dinner" (I still haven't gotten that last one down).

Forget Slap Cup and Dizzy Bat because who even has time to clean up that mess? We don't live in dorms or frat-like houses anymore; we live in almost-grown-up apartments with classy Ikea furniture and fridges that are filled with kind-of healthy food staples and not just beer. We're adults, goddamnit! So let's finally say goodbye to the drinking games that once made us feel like we were completely invincible (because we are most definitely not). Admit it, you'll probably never play these college drinking games again.

Nope. No, thank you. As I've grown, so has my appreciation for all of my toes.

Oh, Flip Cup. What a fun game. You drink things, you flip things, you drink things, and then you flip things. Obviously college students would like the rules to a game like that. And if you want to raise the stakes, you could always play Survivor Flip Cup and vote off your teammates one by one. You might think this one's a keeper, but just try cleaning that warm beer smell off of your adult floors. You're gonna want that safety deposit back.

I've got to admit, I still play Beer Pong every once and a while (as long as it's not in my pretty home with my pretty, clean floors). Why? Because it's fun. BUT, what I don't do is play Century Pong (with 120 cups and 36 beers) — because that game is never-ending and seriously daunting. No, I would not like to drink all of that beer right now.

Multiple shots? Are you kidding me? My body can't handle more than two shots anymore. It's a sad truth that I've come to face.

Not only have I lost the youth that combats hangovers, but I've also lost almost all of my athleticism. As much as I want to spin around with my head on a bat, I just can't.

Every college student has slapped the bag before. It's basically a right of passage. However, the amount of sugary alcohol in those boxes makes me want to curl up and cry because I can already feel the unavoidable headache that comes along with it.

Yeah, Ron Burgundy has got it right. Taking a shot of beer every minute for an hour is way more dangerous than it sounds. That's an average of five beers in one hour.

So you want me to pass a pitcher of beer around and then drink from it? That's just not sanitary.

My childhood dream was to be in the Olympics, but this is not the one I was talking about. Best to to leave this one for the history books.

We're talking two teams of four to six people with each team having to consume a rack of beer, two grams of weed, and two large pizzas... and then they have to finish a 100-piece puzzle? I'm almost 100 percent positive that my body would never recover if I partook in this epic competition.

Of course, we all know that there will be that one night down the line where you'll get a smart idea to play some drinking games, and you know what? That's totally okay. We all need to go down memory lane every now and then and pretend we can still hang with the cool, hip college kids. Because if New Girl has taught us anything, it's that just because you're an adult, it doesn't mean that you can't get completely f**cked up.

But until I come upon one of those gloriously dangerous nights, I will continue to drink like the classy lady I'm telling myself I now am.