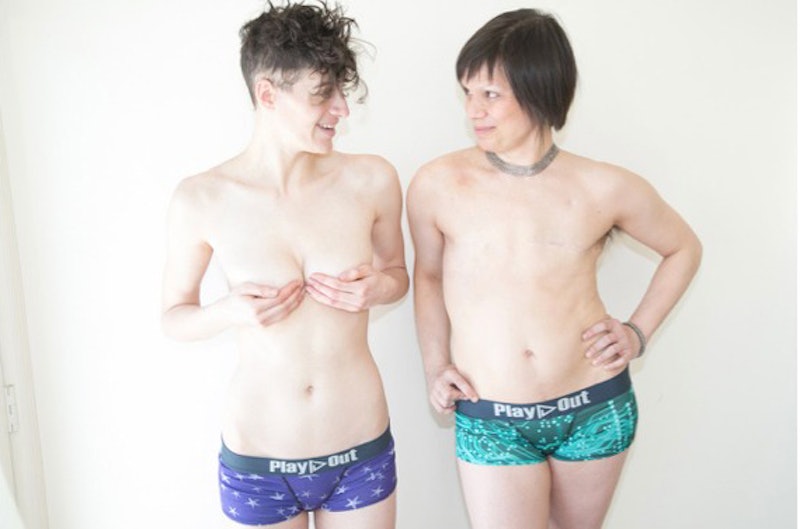 Since 1985, October has been Breast Cancer Awareness Month. Each year, the web is inundated with the color pink and requests to participate in a Race for the Cure. While these endeavors are fantastic ways to raise money and awareness for breast cancer, criticism has been launched at these campaigns for not accurately showing the bodily effects of cancer. Now, genderless underwear company, PLAY OUT is featuring women with double mastectomies in their latest campaign, empowering survivors and celebrating their bodies.

Much criticism has been launched at a multitude of breast cancer awareness campaigns for their sexualization of the disease. Movements like "No Bra Day" and campaigns like motorboating for donations are just two of the examples critics cite when discussing the manner in which the movement has moved away from its focus on survivors and their real issues. While not all mainstream methods of fundraising or campaigning fall into this category, there are many who worry that breast cancer awareness has become more about the participants in the campaigns than the survivors themselves, or that campaigns don't go far enough in showcasing the effects of breast cancer on survivors' bodies.

Genderless underwear brand PLAY OUT is now proudly showcasing the bodies of survivors through new models Emily Jensen, Jody Jaecks, and Melanie "Melly" Testa. Each of the three women underwent double mastectomies, and instead of opting for prosthesises, the ladies are now bilaterly flat chested. Joining the group is the stunning, androgynous model Rain Dove. Rain is best known for her work challenging the gender binary that's so often seen in the industry. The new campaign featuring the talented models is in collaboration with FlatTopper Pride, a support community to LGBTQ survivors who chose not to under go reconstruction or wear prostheses. The photographs for the campaign, by Nomi Ellenson and Candace Doyal, showcase the models in every day life, and most notably, shows them topless in a beautiful, body positive display of their strength. If you're interested in seeing more of the PLAY OUT campaign and more of Rain Dove, check out their fantastic Instagrams!

More like this
15% Pledge Director LaToya Williams-Belfort On The Impact Of Supporting Black Business
By Dominique Norman
15 Talc-Free Makeup Brands For Safer Eyeshadows, Powders, & More
By Audrey Noble
The Beauty Industry Disrupter From Dallas
By Jordi Lippe-McGraw
Women Around The World Are Cutting Their Hair In Solidarity With Mahsa Amini
By Darshita Goyal
Get Even More From Bustle — Sign Up For The Newsletter