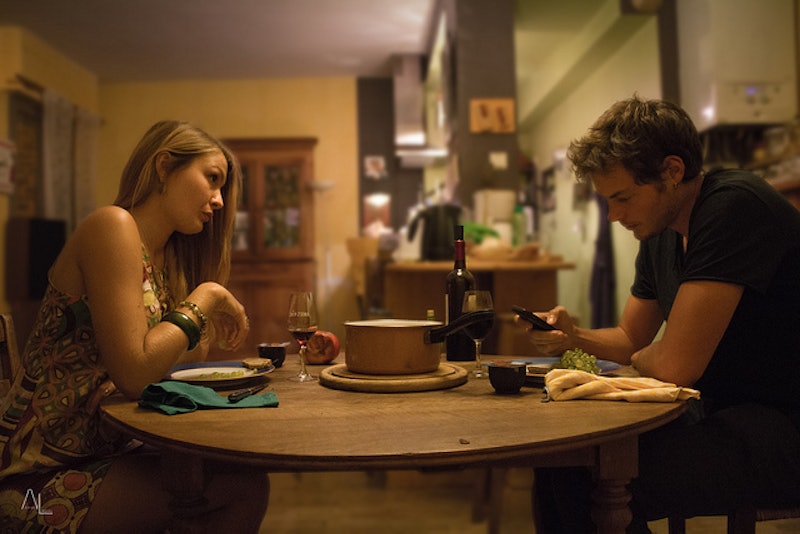 If breaking up is hard to do, how do you know when the relationship is over ? You’ve invested weeks, months or sometimes years into your relationship. You opened up your world – shared your interests, your loved ones and your time. There are strong feelings involved and you’re not sure if you want to let those feelings go. But lately, you’re starting to wonder if this is all going to work out the way you’d hoped it would.

Of course, we should never underestimate our inner resistance to change. Sometimes even the discomfort in a relationship can seem immutable. In a recent live chat, advice columnist Carolyn Hax wrote, “Inertia is one of the most powerful forces in human existence, despite how eager we are to credit our logic and judgment… inertia will push you not to take seriously any signs that your relationship isn’t working.”

But if you’re paying attention to the conflicts in your relationship – and if those issues never seem to resolve – there are usually some clear signs that things between you and your partner are coming to an end. Here are some of the signs to look for when you’re ready for a breakup:

1. The tension crackles — and every topic turns into a fight

It doesn't matter what the topic is: money, your friends, their friends, your family, their family, the amount of time you do or don't spend together, the local sports team, who shot first (Han or Greedo?) — you two are going to wind up bickering about something. And then the bickering will escalate. Before you know it, you're both yelling and cursing at each other.

And then the two of you are locked in a full-blown fight. The worst part is that it's not even the first fight you've had all week. At this point, the argument-free days are vastly outnumbered by the days you spend in tense, unhappy squabbles over just about anything.

2. You've stopped talking about plans for the future

In the beginning of the relationship, you talked about the rest of your lives — and for a while, it seemed like both of your lives were going to intersect and be shared in meaningful, lasting ways. You talked about going on vacations together. You bought advance tickets for events that were weeks or months away from going live. You discussed marriage, pets, the names of your children, where you'd both like to live and what colors you'd paint the living room. But now, it's as if you can barely set plans for next weekend, let alone next month or next year.

3. One of you loses interest in having sex

You two used to be hot and heavy, but now you can barely kiss for more than ten seconds without breaking apart. Let's just say it's been a while since the two of you spent the night in bed together doing anything besides watching TV or checking your email. You've tried to bring up the topic of your unhappy celibacy, but instead, you're met with evasive answers and confusing excuses as to why your sex life has tapered off into non-existence. Or maybe your partner is the one asking what gives — and you don't know what to say, except that you'd rather make an appointment for that long-dreaded root canal than play tonsil hockey with your significant other.

Your friends know something's up, but you've been playing it coy so far. When they ask why you look so tired, you come up with a story about having a lot of deadlines at work. When they push you to open up about what's really going on within your life, you avoid the real talk about all the problems going on in your relationship — because your friends might think differently of your partner if you spoke up and told them how things really were. You'll do anything to preserve the image of your happy relationship — even if the people closest to you can see right through the facade.

5. You feel like you have nothing left to give

I hate the message of Shel Silverstein's The Giving Tree — give all of your resources to a thankless taker and when you've been reduced to a withered old stump in a lonely forest, the best you can hope for is for a selfish person to sit on your stump and block whatever remaining sunlight you've been basking in. Does this sound like your relationship? Are you a bottomless well who gives your partner undivided attention, money, sympathy, food, sex or other coveted tokens of affection? Are you finding that lately, this one-way exchange doesn't seem like such a good investment? You are a living embodiment of the Giving Tree. And maybe you're starting to realize that there's nothing left to give.

6. You keep trying to justify why the problems in your relationship aren't really a big deal

When it comes to the laundry list of problems you two are having, you can minimize any issue into a non-issue. Because if you don't make this particular problem du jour into a big deal, maybe you can avoid yet another argument. Maybe one day, things will go back to the way they used to be... right? Like a tea bag in hot water, you steep yourself in a deep pool of denial so that you don't have to face how badly the relationship has deteriorated.

7. You find other people more attractive and interesting than your partner

Since you and your partner have lost interest in one another, you suddenly develop inexplicable crushes on the most unlikely people: your barista, your co-worker, your work-out buddy. Whether it's a daydream or "harmless flirting," your fantasy life now has some unexpected guest stars — and none of the roles are played by your significant other.

8. You have a gut feeling that the end is near

Your intuition is the best indicator for the end of your relationship. So far, you're spending a lot of time worrying about the way things are going between you two. You've tried communicating your concerns, but for whatever reason, you're not being heard. It's time to believe your instincts. If it doesn't feel right, you need to trust your gut — and then you can really prepare yourself for things to be over. But don't worry — the end of a bad relationship only means you can both move on to better times.