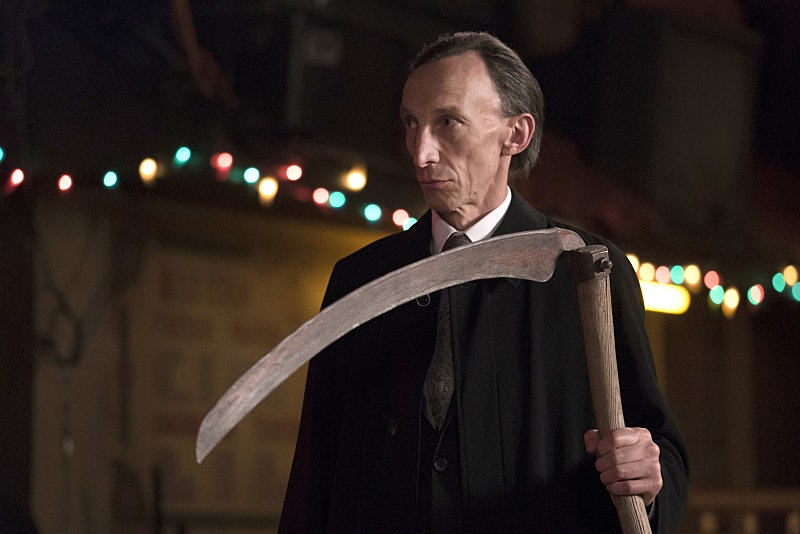 Guys, I'm so confused. How on Earth are The Winchesters and the rest of the gang going to recover from their mistakes this time? Not only did removing the Mark of Cain from Dean's arm release the Darkness into the world — which now looks like it's going to terrorize everything and everyone — Dean killed Death in the Supernatural Season 10 finale. Yup, you read that right. Dean. Killed. Death. Sounds absolutely insane, right? Dean originally summoned Death — and handmade him some queso and taquitos! — in order to get Death to kill him, which Death refused, or at least to remove the Mark of Cain, which Death refused once again. After eventually being told he had to kill Sam, Dean resisted the urge of succumbing to the Mark and seemingly killed Death instead. Now I'm not sure if this is going to stick or not. But if it does, what the hell does this mean for the Winchester and the entire world in Season 11?

After exhausting pretty much every option he could think of, Dean asked if there was anything Death could do to keep Dean from hurting anyone else. Death told him he could essentially lock him away from the rest of the world (Dean says Death is sending into outer space), but it comes with a price. Death and Dean both know that no matter what, Sam won't rest until he finds a cure for the Mark on Dean's arm. And getting rid of the Mark is a no-no because the Mark without a vessel to contain it would release the terrifying Darkness into the world. So Dean had to kill Sam first before being taken away.

Unfortunately, Dean at first seems way too on-board with this plan. He calls Sam to come to the abandoned bar where he and Death are stationed at the moment and tells Sammy the whole plan and why Dean has to kill him. Dean and Sam basically have a similar conversation to the one they've had time and time again: Is what they do really for the good of mankind? Are they actually good or inherently selfish and evil? Is their love for each other unhealthy and does it hurt others in their lives? Here's the thing Supernatural, these questions are pretty much impossible to answer because yes and no applies to all of them. Fortunately for Sam, in the last second after Sam gives Dean pictures of him with his mother as a kid, Dean realizes he can't go through with killing Sammy. So instead he turns Death's scythe on Death himself.

So what are the consequences to this action? Well Dean and Sam are probably more worried about the Darkness that has just been released into the world and is now enveloping the land. But once the darkness clears and starts showing its sure-to-be horrifying effects, the Winchesters and their posse will also have to deal with whatever comes from Death being killed.

It's possible that the rules of Death will no longer apply and the world will turn to chaos now that people can't die. It's also possible that Dean could become Death. Why not? Literally anything is possible on this show. I actually thought, thanks to the Supernatural Season 10 finale promo, that Dean was going to have to become some kind of reaper as part of Death's deal to remove the Mark before this cavalcade of bad news aired on Wednesday night. Or perhaps the mixture of no death and the Darkness will cause the end of civilization and humanity as we know it? No, that's got to be too dark, even for this show... Right?