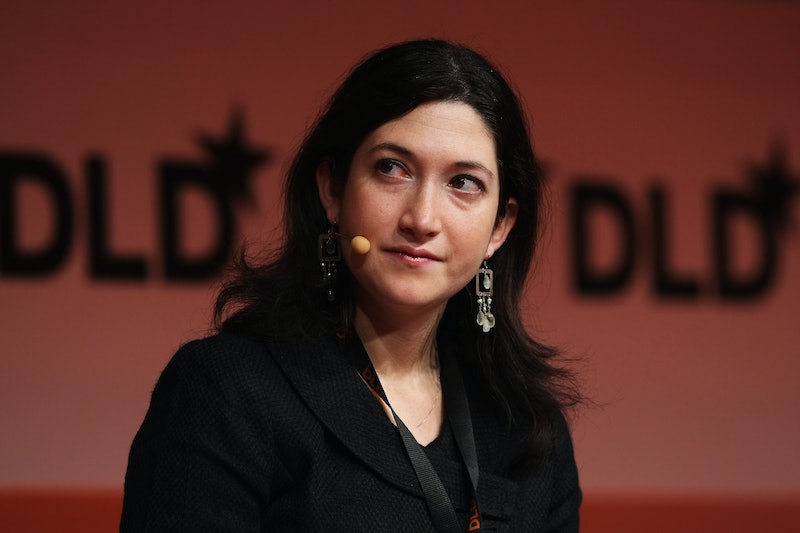 In her Silicon Valley memoir/tech etiquette advice tome Dot Complicated: Untangled Our Wired Lives (HarperOne), Randi Zuckerberg both exalts technology and cautions against its ubiquity. Sharing its name with her weekly newsletter, the book is part Facebook marketing insider details and part strategy for navigating the increasing omnipresence of social media, and, presumably, a way for Zuckerberg to stake her identity apart from being “Mark Zuckerberg’s sister.” Zuckerberg’s tone veers from praising the wonders of our devices to cautioning about the downsides of sharing too much, too often.

Zuckerberg opens with her biggest professional coup, hosting President Obama for a Facebook Live town hall — while 35 weeks pregnant. This was a continuation of her outreach into the world of politics, from attending the 2008 DNC and RNC conventions, to providing 2010 midterm election coverage, for which she earned an Emmy nomination. Her behind the scenes look at Facebook’s mobilization in the wake of the 2010 Haiti earthquake shows how they worked to centralize relief efforts, and the how-your-social-media-sausage-gets-made parts, along with her personal stories, are the best parts.

For the most part, the advice in the second half is information that’s often better gleaned in the shorter, newsletter form, or in lists such as the book’s offering of rules to give kids about online behavior. Some of her other arguments are more philosophical than necessary rules for online life. She comes out swinging against online anonymity, which has been the topic of much debate, pro and con. She goes even farther than simply urging readers to use their real names, but posits that those who don’t have at least a minimal social media presence could be harming their careers. “Research has shown that when you refuse to share personal details on Facebook with your colleagues, it reduces your likeability in the office, when compared to people who do share… People like to work with someone they can relate to.” But in advocating for an “authentic online identity,” Zuckerberg misses the inequity of privileging those who want to share those types of details over those who don’t.

At other points, Zuckerberg seems to assume an access to and proficiency with tech that, while probably suiting her target audience, can sound overreaching. When she writes, “Giving your child his or her own cell phone or computer is no longer a luxury; it’s a necessity,” she doesn’t address those who may not be able to afford such “necessities.” She makes a similar assumption when it comes to romance when she writes, “…when you start dating someone, pretty much the first thing you want to know is ‘What’s that person’s profile like?’” She also advises soon-to-be parents to “register e-mail addresses and a .com domain for your kid, and at least Google your baby’s name once before choosing it,” which people like Slate columnist Amy Webb are already doing.

Her book succeeds when she follows her own advice on authenticity and reveals where even someone who should know better can still go awry. What are some of her gaffes? Tweeting about New York bar Apothecary, musing “It would be a huge bummer if their facebook pages “accidentally’ went down,” which rightly got her some flak. Other instances are probably ones that wouldn’t be an issue for the average person, such as when Zuckerberg's bachelorette photos became public. Her exploration of the public/private divide and what she calls “personal information,” the kind we’d share with friends but wouldn’t necessarily want seen by the world at large, is more universal. We don’t all have the luxury of claiming, as she does, “If someone doesn’t want to do business with me because I post photos of my son or my band, well, then maybe they’re not the type of person I want to do business with either,” but this question is only going to become more prevalent.

For those who spend all day, every day on the web, much of the advice in Dot Complicated won’t be novel; those who are either relatively new to social media or are concerned about privacy (their own or family members’) will find it more useful. Then again, Zuckerberg openly states that “this book isn’t for the techies.” Presumably it’s for the new moms she discusses who spend two hours a day on Facebook, or older users who are being prodded into the online arena by peers, coworkers or family members. For them, her tips are useful general guidelines, though shouldn’t be taken as gospel. Her personal stories are the more compelling aspect of the book, and while there was a little too much celebrity name dropping for my taste, they anchor her suggestions for achieving tech-life balance.