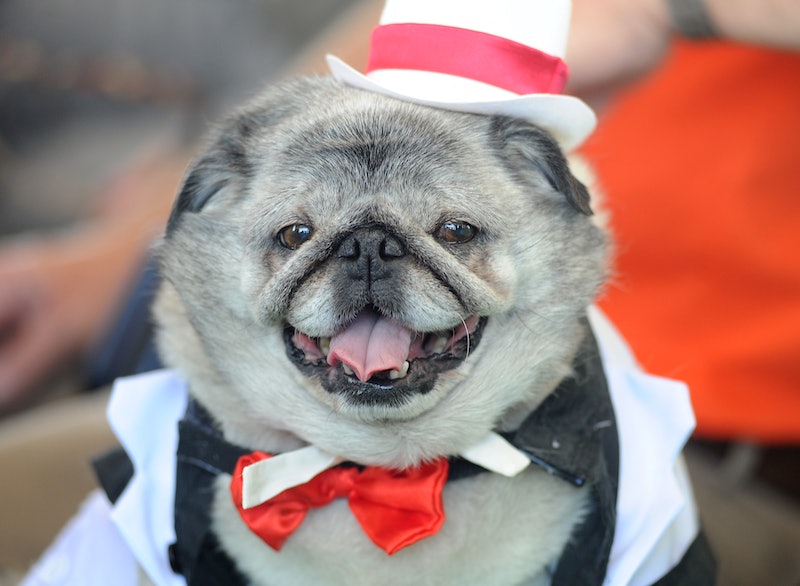 Full disclosure: I am a full-on, card-carrying, cross-the-street-to-cuddle-a-Doberman dog lover. Some people have particular breed preferences, but I'll take 'em all — sweet, soppy, angry, aggressive, teacup-sized or able to fit in their own tugboat, it makes no difference to me. My husband and I are so inured to bad dog behavior that we take on "problem" dogs from suffering owners as a hobby; over the course of one summer, we transformed an agoraphobic, traumatized Newfoundland with a barking problem into a (relatively) sane animal, to the astonishment of his owners. What I've learned from all of this is that dog behavior that looks completely loony to us generally has a totally understandable cause, or serves an important function.

But even knowing that, a lot of the hobbies that dogs enjoy can leave us scratching our heads — because they're so completely distant from human social or hygienic behavior. I mean, why are they so obsessed with each others' butts? What is with the fixation on poo? And why are they peeing on my nice new Coach bag?! But you can save yourself a lot of headaches by getting a read on where dog behavior is coming from before you spend any long-term time with dogs. I guarantee that, however utterly absurd what they're doing may seem, much of it comes from a place of rock-solid canine logic.

And hey, at least dogs are consistent. You know immediately if they like or hate you (whereas cats do the Ever-Seductive Withholding Dance and then lick your hair while you're sleeping). And if you don't understand the first thing about our furry, poo-obsessed friends, here's a guide to six of their most head-scratching behaviors.

Going to the rear end first is also a way of diffusing conflict. Dogs don't greet like humans, with eyes meeting because for canines, direct, extended eye contact is a sign of aggression, which could lead to fights. According to The Daily Puppy, sniffing butts is a way for dogs to calm down and reduce stress when they're faced with potentially scary new stimuli.

For the most part, dogs have adapted heartily to centuries of living side-by-side with humans. Howling, however, can make you feel as if all those centuries are irrelevant and you've got a wolf in your living room.

Dogs are vocal animals and very social, so howling can actually mean a few things. A howl is a dog's natural response to high-pitched noises, like singing, sirens or babies crying. Put simply, the dog is trying to communicate with what it thinks is another animal's howl. Howling can also mean a variety of things: a howling dog may be announcing their presence, trying to produce a reaction, attempting to communicate distress, or working to get you to come back if you've gone away.

The whole peeing-on-everything-in-sight phenomenon, which can seem utterly mystifying to non-dog owners, leads right back to dogs' super-smell capability. This behavior is actually called urine-marking, and it's usually a show of dominance. It's literally the dog putting up a flag on that particular item that says "Mine". It's a way of making themselves feel more comfortable — their pee has a unique "scent" which communicates to other dogs in the area. If your dog pees on your shoes, or everywhere in the neighborhood while you're walking it, it is marking it's territory — which it will be particularly prone to do if you're in unfamiliar surroundings, or there are other dogs around who might challenge it.

Different dogs use urine-marking in different ways. Over-stimulated dogs might start to mark everything in sight, including other dogs, while female dogs who haven't been spayed often mark a lot more around their period of being "in heat". And dominant males will pee right over another dog's mark.

4. Putting Their Head In Your Crotch

No, you aren't imagining it: dogs do tend to go straight for the crotch when meeting new people. The simple reason is that crotches and armpits are the locations of human apocrine sweat glands, which periodically secrete sweat and pheromones. Dogs, meanwhile, have these glands all over their bodies — they are present in literally every hair follicle — and use the apocrine smell as a pheromone "guide" to another animal's social position and feelings. So they tend to seek them out to gather information when meeting a new creature, even in animals with less dense collections of the glands (i.e. us).

It has been discovered that dogs also sniff women a lot more when they're ovulating, because the pheromones emitted from our glands during that period of time are stronger than they are at other times of the month. This makes sense, because men who smelled the sweat of ovulating women consequently became more ready to mate — so maybe we're closer to a canine's crotch-sniffing ways than any of us would like to admit.

OK, this one is disgusting — but it may have a solid evolutionary basis. One theory about why many dogs eat their own poo (which is called coprophagia) is that they are concealing themselves and their tracks from potential predators. Poo-eating is very common in nursing mother dogs, who eat their puppies' poo in order to prevent any big, hungry creatures from finding the scent and nabbing the pups for dinner.

It may also be compulsive — yes, dogs can get compulsive behaviors as well as humans, particularly if they're under-stimulated or under stress. It's also been theorized that the poo-eating dog is trying to get nutrients that it isn't getting or absorbing properly in its normal diet.

What looks like cute puppy confusion may actually be a sign of the compulsive behavior I highlighted earlier. Dogs who've had anxious or stressful lives, don't get out enough, are confined or feel frightened can develop compulsive tail-chasing and spinning tendencies to make themselves feel better and bring order to a chaotic environment.