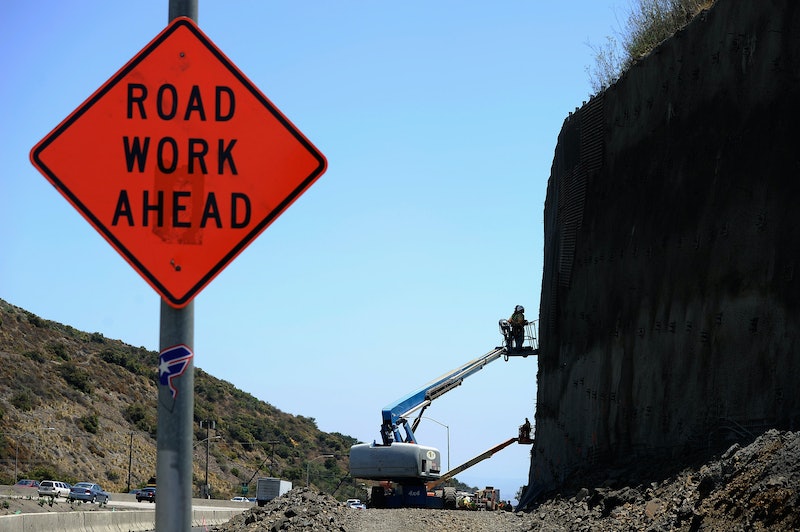 The Senate has to patch up the Highway Trust Fund before they can take off for a long Memorial Day weekend, one of several last-minute items on their docket before the annual recess. The fund, set to expire on May 31, helps pay for infrastructure projects such as bridges, highways and public transportation. The House passed a bill Tuesday extending that deadline to the end of July — it now sits before the Senate, whose members are taking off on Tuesday for a four-day break.

So what is the Highway Trust Fund? Established in 1956 to build an interstate highway system, the fund has expanded over the years to include all kinds of surface transportation. Until 2008, it was paid for entirely by user fees, that is, a tax on gas and diesel. That tax hasn't been raised since 1993 — for context, this means it's been stagnant since before J.K. Rowling published the first Harry Potter novel, before Friends premiered, and before Justin Bieber was born.

As a result, the fund has been drastically underfunded for more than two decades. In 2008, it got so bad that Congress authorized a money transfer from the general fund to keep it afloat — a move they repeated four times in the next six years.

This has put U.S. infrastructure in a bad place — just ask John Oliver, who aired a segment about it in March. He's not the only one taking note — according to TRIP, a national transportation research group, 19 percent of America's major roads are in poor condition, 24 percent of U.S. bridges are structurally deficient or functionally obsolete and 44 percent of the nation's major highways are congested.

The short-term extensions aren't making things much better, either — without a sense of security in funding, states are reluctant to take on the larger infrastructure projects necessary to improve these issues, as the White House said in a policy statement released Tuesday after the House passed the short-term extension:

“This continuing pattern of uncertainty has already caused several states to cancel or defer projects during the height of summer construction season and has undermined the ability of states and localities to keep Americans at work building and repairing the Nation’s roads, bridges, and transit systems."

While most members of Congress on both sides of the aisle agree that the Highway Trust Fund needs to be reauthorized with a stable funding source, there's a lot of debate over what that funding source should be — and it's this debate that pushed lawmakers toward yet another short-term solution, their 22nd quick fix in 17 years, an outcome no one is particularly pleased about.

My preference is to buckle down, work hard, find the dollars and have a long-term surface transportation bill that’s sustainable.

Finding the dollars, though, has not been and will not be easy. Raising the gas tax, the traditional way to pay for the fund, has proven wildly unpopular even in the face of falling gas prices. The Obama administration's suggestion of repatriation, or taxation of corporate profits earned abroad and brought back to the U.S., has also not found enough support. More innovative ideas, like the mileage-based user fee supported by Oregon Rep. Earl Blumenauer and being piloted in his home state, haven't gained enough traction.

In the meantime, the short-term fix sits before the Senate as one of many issues they have to deal with before their long weekend, and it is, as John Oliver said, much less sexy than, say, the National Security Administration's surveillance programs or the contentious Trans-Pacific Partnership trade agreement.

More like this
Courteney Cox Doesn't Remember Filming 'Friends'
By Jordyn Tilchen and Sam Ramsden
Scotland's First Period Dignity Officer Has Sparked Backlash
By Darshita Goyal
The 7 Best Cooling Mattress Protectors, According To Reviewers
By Lisa Fogarty and Rachel Dunkel
Amazon Is Selling Out Of These Products Under $35 That Make Your Home Look So Much More Expensive
By Mackenzie Edwards
Get Even More From Bustle — Sign Up For The Newsletter