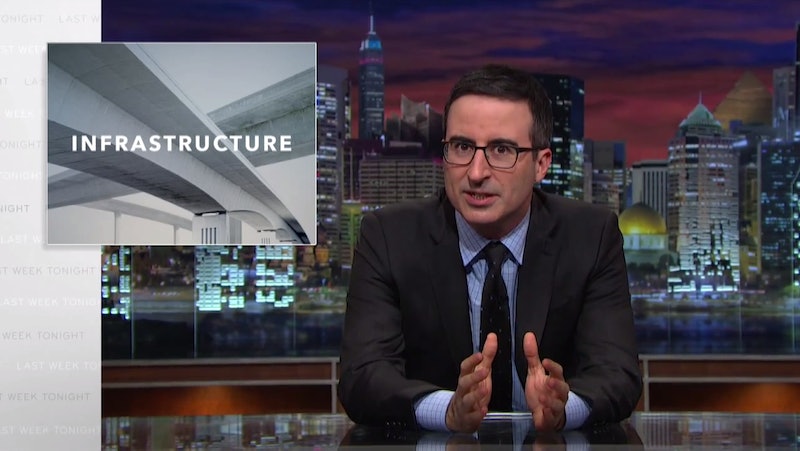 Time and again, the subject of our country's infrastructure has been shoved under the rug. Many politicians have deemed it a boring issue that nobody wants to talk about; it's "unsexy." And much like the men who label it as such, John Oliver quips on his latest episode, infrastructure is "important but not sexy." Sure, infrastructure may not be as exciting as counterterrorism measures, but it is an urgent issue nonetheless, and the more we ignore it, the more American lives are at risk. In this week's episode, John Oliver examines America's deteriorating infrastructure — "roads, bridges, dams ... basically anything that can be destroyed in an action movie" — and helps make the issue more exciting with his own blockbuster action movie.

Oliver opens his segment by acknowledging the popular opinion that infrastructure is not sexy, but to be fair, he notes, it's because "Hollywood promotes unrealistic standards of infrastructure beauty." Then he points to a picture of the Yellow Brick Road in The Wizard of Oz and shouts, "That's not what a real road looks like! Real roads have curves!"

All kidding aside, Oliver says that he doesn't find infrastructure boring at all; in fact, he thinks it's fascinating. And in saying that, he's essentially become the "rad youth counselor trying to convince you that Jesus was the Taylor Swift of his time." But all kidding aside again, the state of America's infrastructure is pretty dire and something needs to be done.

Dams are amazing. They're the most powerful device we have for holding back liquid — aside from the idea of using a Porta-Potty.

Much like most Botox recipients and competitive cloggers, the average dam is 52 years old and probably has something deeply broken inside of it.

With a revelation like that, states are jumping into action, right? Not so much, Oliver says. Most states employ very few dam inspectors to ensure their dams are up to standard. And in some, like Alabama, where there are some 2,000 dams, there are none.

Zero inspectors. That means that the state of Alabama has exactly the same number of dam inspectors as the band Alabama.

And it isn't just dams. Every component in America's infrastructure is in serious disrepair. Oliver plays another clip that shows that in 2013, the American Society of Civil Engineers gave the U.S. a D+ for its infrastructure. And the World Economic Forum ranked the U.S. 16th in quality of overall infrastructure. So what are the actual consequences of a poor infrastructure? Last August, a main water pipe burst in LA that submerged the UCLA campus in 20 million gallons of water.

While the fear of bridges collapsing or dams breaking are not unreasonable, the littlest infrastructure details can also have grave consequences. In 2011, an Oakland man hit a pothole while he was biking, crashed, and was struck and killed by a vehicle. That's just one example of our infrastructure's state of deterioration and negligence. In a clip, former secretary of transportation Ray LaHood tries to avoid admitting the scale of the issue, but ultimately fails. When asked about the 70,000 bridges deemed "structurally deficient" and whether they're dangerous, LaHood says, "I don't want to say they're unsafe, but they're dangerous."

Wait, hold on. When we're at a point where the secretary of transportation is struggling to decide between using the word "unsafe" and the word "dangerous," we might have a problem worth fixing.

But just to show you how close we might be to a major disaster, Oliver tells the story of how two Philadelphia construction engineers stopped to get a sausage sandwich off I-95 and discovered a huge gash in one of the columns holding up the interstate.

So there might have been a disaster if those Philly contractors hadn't wanted to stop for a sausage sandwich, which means we were fine — we were always going to be fine. But the scary thing is, what if the next cracked pillar is next to a vegan smoothie stand? The bridge is going down, and people are going to die.

And over in Pittsburgh, nicknamed "The City of Bridges," their solution was to build a structure underneath a decaying bridge to catch falling debris so it wouldn't hit the traffic below.

They built a bridge under the bridge. That is a college sophomore approach to structural engineering. Yeah, the trash was overflowing, so I just started putting it in the microwave. Problem solved.

Then there's the Tappan Zee bridge in New York, which one government official called the "hold your breath bridge."

The only time we should talk about "hold your breath bridges" would be if for some reason Beau Bridges were into auto erotica asphyxiation and you were trying to remember which one he was. "Is he the normal Bridges or is he the Hold Your Breath Bridges?"

So what does this mean for the public's safety?

At this point, we aren't just flirting with disaster; we're rounding third base and asking if disaster has any condoms.

Infrastructure is such a pressing issue that the majority of politicians agree that something needs to be done. In a clip, Richard Trumka, the president of labor union federation AFL-CIO, says that though business and labor disagree on most issues, infrastructure is one in which they agree on, and that should tell you something.

Still not convinced? Oliver drives the point home by pointing out that even a "total idiot" agreed that our infrastructure needs to be fixed.

Then he plays a clip of Donald Trump stating, "We have to rebuild our infrastructure."

That upside-down piece of candy corn in a wig made of used medical gauze is right.

So why haven't politicians done more about repairing? Oliver explains that while building something new is exciting, routine repairs is not.

Infrastructure is like Legos — building is fun, destroying is fun, but a Lego maintenance set would be the most boring f*cking toy in the world. It comes built, and then you maintain it, and if you do it right, nothing happens and eventually, you die. Have fun, son!

Oliver then brings up the U.S. Highway Trust Fund, which he says is the single largest source of infrastructure funding in the U.S., and unless Congress steps in, it will expire on May 31. So can we expect Congress to act? Well, Oliver says, given that there hasn't been long-term transportation legislation for over a decade. On top of that, raising the gas tax that finances the fund is extremely unpopular, as a C-SPAN clip shows. Caller after caller voice their opposition against raising the gas tax. So it's not too surprising that the White House hasn't exactly been eager to raise it. But luckily, it has presented an alternative solution to raising money for raising money for the U.S. Highway Trust Fund: by closing corporate loopholes that allow them to store assets overseas.

There's yet another obstacle: John Boehner. Not only did he dismiss this proposal in the past, he's been trying to promote his own idea for two years. Oliver then shows a montage of clips in which Boehner talks about the need for an infrastructure repair plan, but doesn't actually offer one.

If a giant lizard were attacking our roads and bridges, you wouldn't spend two years saying, "Yes, I am committed to preventing marauding lizards from destroying our city, but we need to do it in a long-term program that is in fact funded.

Oliver and his team even emailed Boehner's office asking what his proposal is exactly. After receiving no reply, they emailed again, called once, and then, feeling desperate, sent him a tweet using the hashtag #HappyBirthdayJustinBieber "just to make sure he would see it." Still nothing. But they somehow found Boehner on Vine — "because apparently he's 14 in 2013" — and sent him a six-second video of Oliver asking him the same question. Still nothing.

The lack of political urgency in tackling this problem is insane. And you cannot tell me you're not interested in this.

Why? Because every summer Americans flock to theaters to see the country's infrastructure being attacked by terrorists or aliens. But in real life, it's just natural decay that actually threatens our infrastructure. So maybe it's about time that someone made a blockbuster about that ... and that's exactly what Oliver did. It's a movie that you have to see to believe — "Brace yourself for 98 heart-pounding minutes of incremental maintenance" — but I'll leave you with some tantalizing screen grabs.

Watch the entire segment, including Oliver's infrastructure blockbuster, below.

More like this
Another Side Of Rupert Grint
By Maria Sherman
'Boiling Point's TV Sequel Is Set To Deliver A “Rollercoaster Of Emotions”
By Catharina Cheung and Sophie McEvoy
At 28, Rosie Perez Risked Her Career To Stop Playing Stereotypes
By Gabrielle Bondi
Here’s Everything Coming To & Leaving Netflix In February
By Jake Viswanath
Get Even More From Bustle — Sign Up For The Newsletter
From hair trends to relationship advice, our daily newsletter has everything you need to sound like a person who’s on TikTok, even if you aren’t.