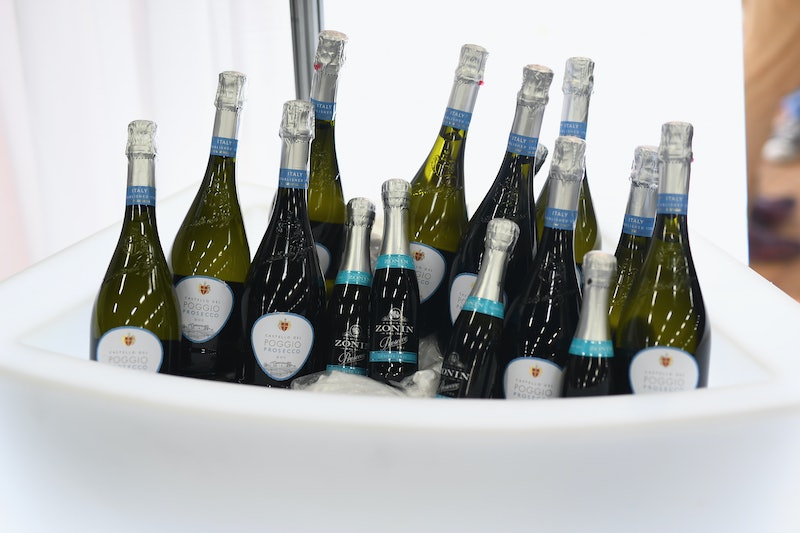 Prosecco wine has been having a bit of a moment over the past few years. The Italian sparkling wine, which is frequently viewed as a cheap alternative to champagne, has seen an increase in sales over the past few years, but apparently Mother Nature isn't a fan of your favorite Saturday night companion — according to manufacturers, last year's poor harvest in Italy could lead to a global prosecco shortage. On the other hand, prosecco's rising popularity means that other areas of the world have started producing the product, so it might not be time to freak out just yet. We're all adults here. We can remain calm even in the face of such devastating news, right?Oh, forget it. Are you freaking out? Because I'm freaking out. Prosecco has become a staple in cocktails of all kinds thanks to its fizziness and fruity taste. The fact that it's so darn cheap doesn't hurt, either. At often only $10-15 a bottle, the sparkling wine is perfect for inexpensive summer cocktails you can sip at the pool with your friends. However, your plans for cheap, bubbly deliciousness might be derailed this year. According to BuzzFeed, export manager Roberto Cremonese claims that last year's poor harvest could cause manufacturers to jack up prices by up to 50 percent.

On the other hand, according to the Independent, there's no way to tell how far the problem will reach yet. "We'll find out how big the problem is in August when the brokers release their stock," Cremonese told The Drinks Business. "At the moment we don't know how much Prosecco they're holding on to."

It looks like there's no need to begin stockpiling the drink just yet, but it might be time to start reintroducing your palate to the terrible champagne you used to drink in college. Maybe it'll taste close enough to the real deal if you drown it in enough cranberry juice. Just in case, you might want to take a look at this list of ways to make cheap champagne less disgusting. In the immortal words of my old college roommate, even terrible alcohol is better than no alcohol.