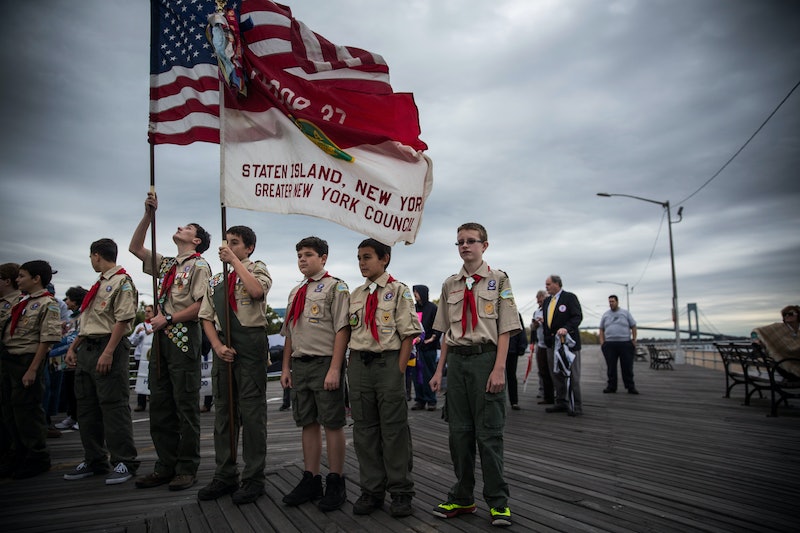 Major brownie points (geddit?): Boy Scouts just might follow Girl Scouts’ example of inclusivity. Earlier this week, Girl Scouts reaffirmed its policy to accept transgender girls in its group — "There is not one type of girl" — and now Boy Scouts of America is beginning to consider some policy changes of its own. On Thursday, Boy Scouts’ President Robert M. Gates called for an end to the group’s longstanding ban on gay adult leaders. Finally.

At the group's annual meeting in Atlanta, Georgia, Gates announced that it would no longer revoke group’s charters that employed gay leaders. Although the changes have yet to be made into a formal proposal, Gates said that the issue would be more formally addressed at a future meeting. Gates has decided on the change, he said, upon the realization that Boy Scouts’ future would not be sustainable in the modern world if they did not adapt.

The status quo in our movement's membership standards cannot be sustained.

If not, Gates said, it could spell “the end of us as a national movement.”

Same-sex marriage is now legal in more than 30 states, and the Supreme Court is currently deliberating whether there exists a constitutional right to gay marriage. According to a recent Gallup poll, a record 61 percent of Americans supports same-sex marriage. Moreover, for the first time ever, a majority of Americans see being gay not as a trait made by either upbringing or environment, but rather a sexual orientation with which gay and lesbian people are born.

However, as progressive as the Boy Scouts' latest change may sound, it’s not nearly as sweeping as it needs to be, especially in light of the rest of the country's progress. While Gates called for an end to the ban, religious organizations — which sponsor 70 percent of Boy Scouts troops — will still be free to set their own policies for hiring as leaders. So, while no longer supported at the national level, it's still possible for gay men to be banned from serving as scout leaders.

That said, this is a step in the right direction. While the group amended its rules in 2013 to ensure that youth could not be turned away from the group “on the basis of sexual orientation or preference alone,” that vote did not address the ban on gay adults as troop leaders. As American's position on gay rights continue to evolve, Gates said on Thursday

that Boy Scouts didn’t have much choice but to change.

Between internal challenges and potential legal conflicts, the [Boy Scouts of America] finds itself in an unsustainable position -- a position that makes us vulnerable to the possibility the courts simply will order us at some point to change our membership police. We must all understand that this probably will happen sooner rather than later.

In some Boy Scouts groups, it already has happened. According to The New York Times, a scout group in New York defied the ban against gay leaders when it employed a gay 18-year-old Eagle Scout to work at a scouts’ summer camp.

While Boy Scouts still lags far behind Girl Scouts in inclusivity, Gates’ announcement highlights the fact that when support for an issue becomes so widespread, sometimes change is just unavoidable. Zach Wahls, executive director of Scouts for Equality, explained

just how big a deal Gates' announcement on Thursday is and could be:

Dr. Gates has built his reputation on straight talk and tough decisions, and I’m glad he’s fully endorsing a re-evaluation of the Boy Scouts’ ban on gay adults. It seems like the Boy Scouts will continue an internal dialogue about the subject and that a change within the next year or two is imminent.