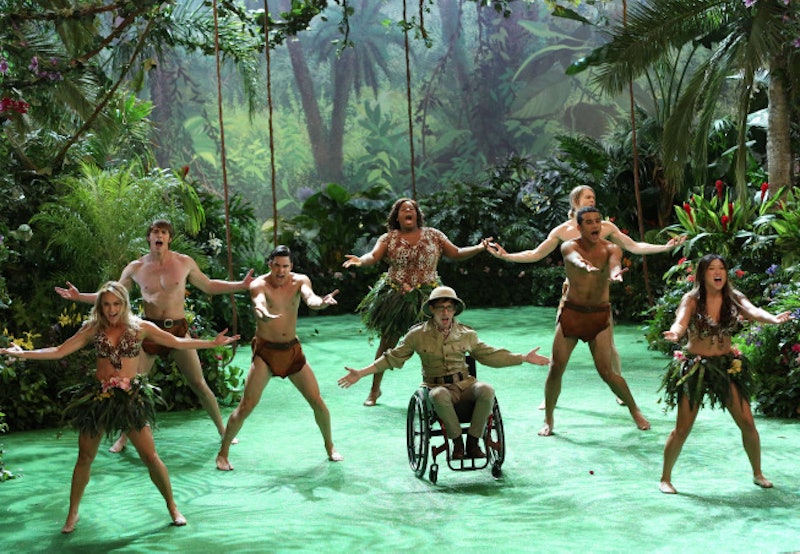 Glee returned from its three-week hiatus Thursday night on FOX (following its farewell episode to Finn Hudson and Cory Monteith) with an episode that was meant to put a little more pep in our step, appeal to our competitive sides, and ultimately make us "Roar." Now that we've been given a grieving period (still not long enough, if I say so myself), the New Directions asked us to choose, "A Katy or a Gaga"? But really, the choice was more than obvious — Katy Perry, duh.

Considering that more New Directions kids were standing up to declare loud and proud that they were worshipping the Candy Queen and were definitely not mini-Mother Monsters, it's clear that Lady Gaga's heyday may very well be over (even if she just announced plans to perform in space in 2014). At least on Glee, that is. In the past, Gaga was a weekly assignment that inspired cheers and excitement (and an epic "Poker Face" duet featuring Lea Michele and Idina Menzel), but this week, only four members out of the entire group pledged their allegiance to the ARTPOP singer. Not even a stellar performance of "Marry The Night" by American Idol alum Adam Lambert could drive the Gaga-worshippers to come out on top this week.

In a "twist," Mr. Schuester — ever attempting to "keep things interesting" — asked the New Direction Katys and Gagas to swap sides as a part of their assignment for the week. The Gagas performed songs by the Prism singer and the Katys searched for their inner, edgier monster to perform songs by Gaga. Here's how the performances stacked up:

Sam, the self-proclaimed leader, led a band of inherent Katys (Ryder, Marley, Artie, and Blaine) through a hyper-theatrical performance of Lady Gaga's new song, "Applause." The performance, complete with strobe lights, catwalk, human-sized birdcage, smoking plant-type thing, and extreme costumes, was actually pretty good. The group really went all out in what they thought was true Gaga-fashion — except for Marley, who selfishly decided to ruin the performance by coming out dressed as Katy Perry. (She's just really so damn annoying.) The group really gave "theatricality" their best shot, but no one was really excited about it and there weren't too many smiles and cheers when it was over. (Marley also got suspended when it was over, so that might have been a little insensitive.) Overall, an A for effort but a 3/10 on enthusiasm and execution.

This team, the inherent Gagas (made up of Kitty, Unique, Tina, and Jake), even though they were outside of their alleged comfort zone recognized an appreciation for Katy Perry's music. People love Katy because her music is fun and nice, according to Tina, so they opted for a costume-less performance of the singer's post-Russell-Brand-split single, "Wide Awake." And it was amazing. Like, actually, I'm going to download the song off of iTunes while I write this. (Can you say "four-part harmonizing"?) For this one, A- for effort (because they could've at least coordinated their outfits), but 10/10 for enthusiasm and execution.

For extra credit — and to make sure Katy Perry is the rightful winner of Glee's competition this week — we'll look at the two other numbers in the episode:

In typical Lambert fashion, the vocals on this were flawless — if you were actually listening to them, and not being distracted by his sparkly black suit, platform shoes, the fact that he was referring to himself as "Starchild," and the fact that he was swinging from a chandelier. That's kind of an over-the-top audition for a brand new "indie" band. Yes, Adam Lambert auditioned for Kurt's new band (since he's been kicked out of the Adam's Apples and is feeling the pressure of success living with Santana and Rachel), and Kurt hated it. I mean, we do know that Kurt felt a little intimidated by Starchild's strong stage presence, but there was once a time where Kurt would give his soul for Gaga, and, Thursday night, he hardly batted an eye. Though he did end up asking Starchild to join his band, I still don't see any Gaga in their future (considering their plans to be a Madonna cover band — we know how Madonna and Gaga feel about each other). I think it's safe to say that this counted as a negative for Mother Monster tonight.

The fact that the final number of the night was Katy Perry's first single off of Prism, "Roar," is what really leads me to happily chalk this episode up as a victory for the Teenage Dream artist. Even if "Wide Awake" had completely tanked, using "Roar" for the finale number secured Glee's claim that Katy is number one and that she got the last word on Thursday night. The entire glee club (except for Marley, who's still suspended) performed in full-costume and on a fully decorated stage, and, over in New York, Kurt's new band, the "Pamela Lansburys" (named because they plan to combine the sex appeal of Pamela Anderson and the class of Angela Lansbury), performed together for the first time on this song. Lea Michele's Rachel Berry is singing for fun again, and all is right in the world. So thanks to Katy Perry for that.