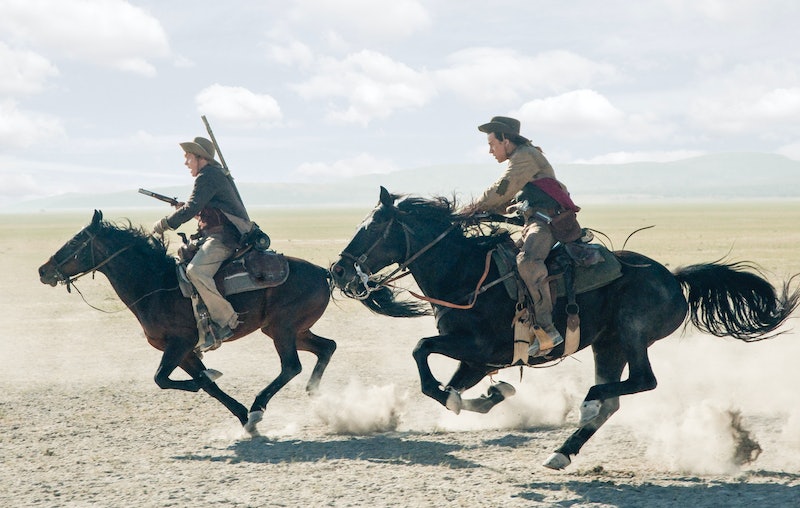 Since History Channel is back in the miniseries game with Texas Rising, it seems pretty fair to wonder if its series will stay true to the name of the network. Its miniseries Hatfields and McCoys held fairly true to the history, and was extremely popular, so how accurate Texas Rising is to real American history could wind up helping to predict the show's success. And while the show does use some real historical figures to underpin the storyline, it's not too hung up on historical accuracy or hyperrealism. It's even incorporated some elements of tall tales and local Texan legends. There's so much going on that over only five nights, there will be 10 hours worth of Texas Rising.

Writer David Marion Wilkenson, who inherited the project at History from another writer, told The Austin Chronicle that he didn't even really care about the historical accuracy of the show — because that's not the type of series this is. This is a mythical retelling of the West, informed by not just historical accounts, but first-person exaggerations, local legends, and a little bit of narrative convenience to bring it all together. Because after all, this is a miniseries first, not a documentary. Therefore, he's writing about the fact-checked real history of figures like General Sam Houston alongside characters like Emily D. West, a real free black woman who is credited with defeating a Mexican army in tall tales and nicknamed "The Yellow Rose of Texas." The song of the same name covers both her real and legendary achievements.

There are even a few totally fictional characters among them, like Ray Liotta's Lorca, described in the video below, who may be based on the shattered post-Alamo American soldiers, but is an invented character given the thirst for nothing but vengeance on the Mexican army. Meanwhile the Mexican president, Santa Ana, is both a character and the real head of state in 1836. But characters like Liotta's aren't a blow to the authenticity of the series — too much specific historical detail would only bog the show down.

But Wilkenson is less than worried about the potential backlash to some fudged details. As he said to the Austin Chronicle, "Hollywood, much like many historical novelists and all good criminal attorneys, never lets the facts get in the way of a good story." If a better story comes from condensing events and inventing a few characters I'm all for it — because Texas Rising is literally packed with ideas. Hopefully they manage to come together in a satisfying match of fact and fiction.

More like this
“The Door Is Always Open” For Another 'Breaking Bad' Spin-Off, Says AMC Boss
By El Hunt
Neil Patrick Harris Will Play 'Doctor Who's “Greatest Enemy” Yet
By El Hunt
'The Undeclared War' Spotlights The Real-Life Threat Of Cyber Attacks
By Maxine Harrison
Romesh Ranganathan’s Avoidance Is Based On His Own “Maledom”
By Maxine Harrison
Get Even More From Bustle — Sign Up For The Newsletter