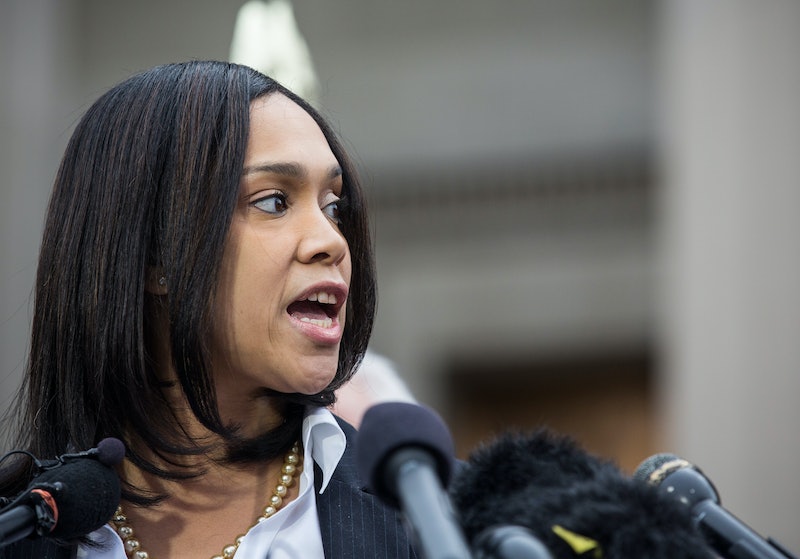 The Baltimore city prosecutor is best known for her role in indicting the six police officers allegedly involved in the death of Freddie Gray. But what other cases has Marilyn Mosby worked on, prior to the Gray indictments? Her track record as Baltimore’s city prosecutor is pretty short. Mosby’s only been in the role since January, and it’s her first stint as an elected official, according to her official bio.

But before Mosby’s name made headlines nationwide for addressing the public outrage over Gray’s death by tackling the alleged police misconduct head-on, she defined her office as being tough on crime. Only five months into Mosby’s tenure, the Gray case is just the latest effort of Mosby's to change what she's referred to as the “the culture of mistrust” within Baltimore’s criminal justice system.

Targeting Baltimore’s violent repeat offender list was one of Mosby’s first campaign promises, according to local website Baltimore Brew. The daughter and granddaughter of police officers wanted greater accountability and transparency in the city prosecutor’s office and promised that court records and results of court hearings would be made public, and special access would be given to victims of crimes, according to WBAL.

"People who have zero regard for human life do not deserve to live among the residents of the greatest city in the world," Mosby said in a primary victory speech via NBC News.

Here are a few standout cases other than the indictments of the six police officers that Mosby has worked on during her tenure.

According to Mosby’s official bio, prior to holding office she lobbied for legislation that would make it possible in Maryland to use prior sex crimes as evidence for juries to consider in sex assault crimes. Earlier this month, a Baltimore jury convicted a man who had been acquitted in four previous sexual assaults, according to The Baltimore Sun. The Sun reported that Nelson Bernard Clifford was tried on four different occasions since 2010 for sexual assault. In each case, the women accused Bernard of breaking into their homes and then binding and sexually assaulting them. In each case, Bernard was acquitted of the charges. Due to Maryland state laws, prosecutors were forbidden from using evidence from past cases to show that there was a pattern to the incidents.

The Clifford conviction was a huge win for Mosby, who is still fighting to get the Maryland General Assembly to change the law to reflect federal law, which allows for the use of prior sex crimes as evidence in new cases.

"While we were able to secure a guilty verdict in this case, we must still encourage our legislators in Annapolis to bring our predatory sexual assault laws in line with the federal statute,” Mosby told the Sun.

A fight between a group of teenagers after the Ravens Super Bowl parade on Feb. 5, 2013, led to the death of 15-year-old Deontae Smith. Nazr Williams, who was also 15 years old at the time of the incident, pled guilty to second-degree murder in April and received a sentence of 30 years, according to the Sun.Despite the fact that 11 of the 12 jurors wanted to acquit Williams and a mistrial was declared, Mosby chose to press on with the case. A reluctant eye-witness and the refusal of two other witnesses to the Ravens Super Bowl parade stabbing to step forward further complicated matters. Since Williams was accused of murder, the case was tried in adult court, a decision which James Johnston, the supervising attorney of the public defender's youthful defender unit told the Sun he disagreed with. Mosby noted in a statement that most prosecutors would have walked away from the case, but her office was ready to try it for a second time.

"The death of a 15-year-old at the hands of yet another 15-year-old is an unspeakable tragedy that no sentence can ever adequately address," said Mosby in a statement.

The body of 16-year-old Phylicia Barnes was found floating in the Susquehanna River in 2011. Michael Johnson, the ex-boyfriend of Barnes' sister, emerged as the only suspect, but a lack of sufficient evidence and procedural missteps has allowed him to remain a free man. According to CNN, Johnson was acquitted on charges of first-degree murder. After being charged with second-degree murder in January 2013, his attorneys successfully argued that the prosecution withheld evidence, which led to a new trial that ended in a mistrial. Judge Addison Howard granted a motion of acquittal for Johnson because of insufficient evidence in January. WBAL reported that the same judge dismissed an indictment against Johnson on May 5. Mosby admits the case was filled with procedural missteps but has vowed to bring Johnson to justice.

An alleged hitman for the Black Guerilla Family gang was convicted on Feb. 6 for his role in the killing of two women in 2013, according to CBS Baltimore. After shooting the two women, Darryl Anderson fled to Birmingham, Alabama, which triggered a year-long search for the 27-year old hitman, who was given two consecutive life sentences plus another 275 years, according to the Sun. After rising to be handcuffed, Anderson gave Mosby the middle finger, according to the Sun.

“Last night’s verdict will not bring those two young women back to their loved ones, but I pray last nights verdict helps them heal and enables them to move forward with their lives,” said Mosby to CBS regarding the verdict.