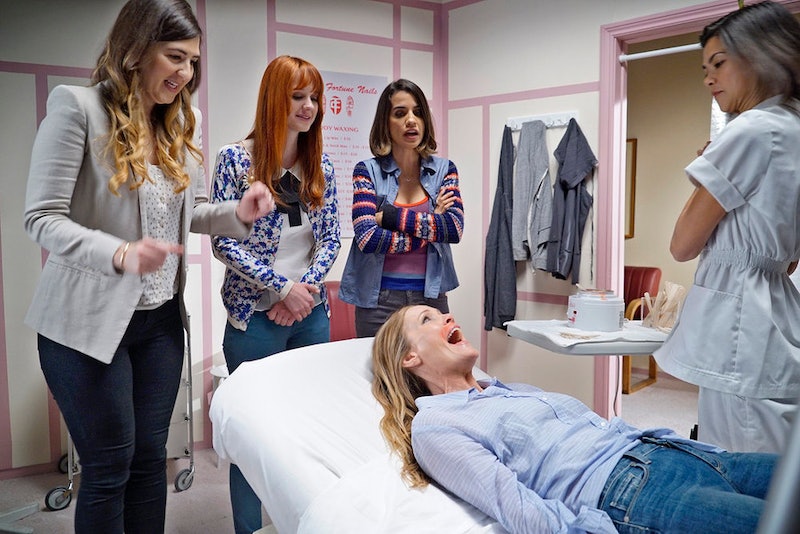 The first ever Red Nose Day in the United States gave us many delicious comedy bits throughout an evening dedicated to raise money for several charities. The second-most anticipated segment (right behind the Game of Thrones musical) were a set of trailers that set out to put a feminist spin on "classic" films. NBC's broadcast of Red Nose Day included five all-female reboot movie trailers.

Introduced by Jane Krakowski, soon to be seen in The Big Krakowski as she joked, each trailer showed some of our favorite comic ladies in roles traditionally played by men. They were hilarious and well-produced, but on the whole I'm not sure all of these entirely got the point. We get excited about all female reboots because we want to see better representation in movies. There's no reason why a bunch of women couldn't pull a heist or go bust some ghosts. Most of these just seemed to reinforce why these films were cast with men in the first place. That shouldn't have been the joke.

Then again, some of the parodies had a different kind of subversive message that I think is just as powerful. Here are the different films and what Red Nose Day's take was with the all-lady twist.

Who knew that 2015 was the year of the 12 Angry Men parody? When twelve women are on a jury? There's no trouble coming to a verdict. Yeah! Go girls! We're sensible and not stubborn and we get things done! If the cast, which included Retta, Yvette-Nicole Brown, and Laura Linney, wasn't so spectacular and the costumes any less fabulous, I might have been more bothered by the joke that women can't decide on food. It's possible that I'm part of the problem.

Leslie Mann took on her husband's classic film alongside other funny ladies that included D'Arcy Carden from Broad City, Natalie Morales from Parks and Recreation and Laura Spencer from Big Bang Theory and The Lizzie Bennet Diaries. In the scene, Mann had her lip waxed — basic as that. I liked this commentary a lot. The waxing scene in the original movie with Steve Carrell is supposed to be shocking and used for comedic effect. Yet it's a pretty common, expected thing for many women.

Indianna Jones And The Last Crusade

Anna Kendrick as Indiana Jones was... just that. She put her signature spin on the character. I liked that she called out the Knight for being inappropriate and talking about her appearance when Indiana Jones has multiple degrees in archaeology. That probably is what would happen if we recast Indiana Jones with an actress, sadly.

Sure, the Orange is the New Black cast may have rambled into a debate about colors and what to wear, but at the end of the day they still kicked ass and got the job done.

January Jones, Bianca Kajlich, and Anna Camp teamed up and we found out that if you made Three Men Baby there is... no point. There are no stakes! Nobody would blink an eye or find it funny if three women were suddenly strapped with the "horrifying" task of being a mother. It wouldn't even be a story. Says a lot, doesn't it?

"But what about the men," none of us asked. Not to be one-sided, Red Nose Day also gender bent backwards and cast Paul Rudd as an awkward Danny Hall, spoofing Annie Hall. Paul Rudd's performance was very funny. However, Diane Keaton's iconic costuming in that particular scene was already so traditionally "masculine" that I'm not sure the switch was particularly interesting.

More like this
Revisit 1992’s 'A League Of Their Own Cast' Photos After The New TV Series
By Grace Wehniainen
What Is Ben Affleck's Net Worth? At 50, The Oscar Winner Makes 8 Figures Per Film
By Meg Walters
Amanda Seyfried Says She Felt Pressured To Shoot Nude Scenes At 19 Years Old
By Jake Viswanath
Someone Must Pay For What Happens To Bad Bunny In 'Bullet Train'
By Arya Roshanian
Get Even More From Bustle — Sign Up For The Newsletter