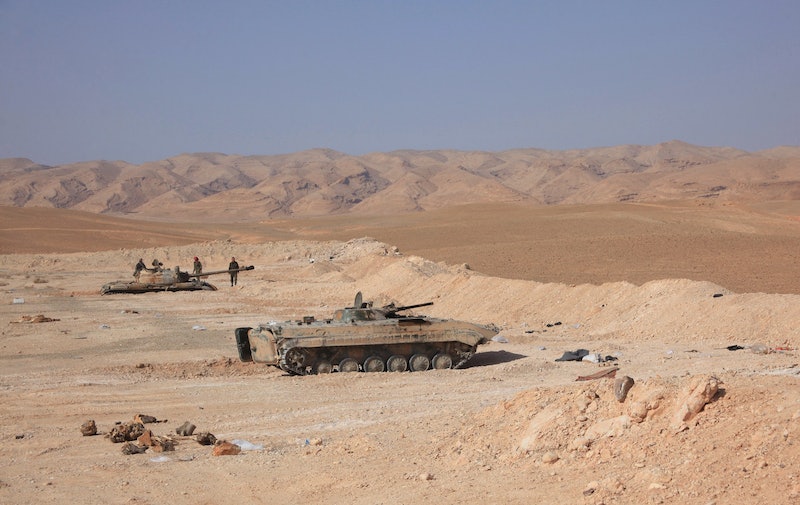 Islamic State fighters have captured the last remaining Syrian government-controlled border crossing between Syria and Iraq, according to the Syrian Observatory for Human Rights. The news, reported by BBC Friday, comes just a day after ISIS militants seized the Syrian city of Palmyra — a strategically significant city of great historical importance. The border crossing, known as al-Tanf in Syria and al-Waleed in Iraq, was abandoned by government troops as ISIS forces advanced, BBC reports. ISIS now controls over 50 percent of Syria’s landmass, and the U.S. has said that fighting the militants will be a “difficult challenge.” So what can the U.S. and the coalition against ISIS learn from the militant group’s recent victories?

The capture of al-Tanf and Palmyra, as well as ISIS’s recent victory in Ramadi — capital of Iraq’s Sunni-majority Anbar province, the largest administrative region in that country — are not minor victories. Despite U.S. military officials’ attempts to downplay Ramadi’s importance (“To read too much into this single fight is simply a mistake,” a Pentagon spokesman is reported by The Atlantic as saying), the capture of the city resulted in the deployment of Shiite militias in the province, boosting Shiite-majority Iran’s influence in Iraq, and possibly inflaming sectarian tension. The reliance on these militias will weaken Iraqi Prime Minister Haider al-Abadi’s authority, according to The New York Times, and could also undermine American-trained Iraqi forces.

And yet, if there’s anything the swift take-over of Palmyra can teach us, it’s that the government forces on the ground in these ISIS battlefields are struggling to do the job. The Syrian armed forces protecting Palmyra succumbed surprising quickly to the ISIS assault Thursday, and the United Nations has now received disturbing reports of troops loyal to Syrian president Bashar al-Assad preventing civilians from fleeing the besieged city before its collapse. Although the UN said a third of the area’s 200,000-strong population had fled, some 65,000 residents are believed to still be trapped in Palmyra. Reports of mass executions emerged from the city after its capture Thursday.

Syrian forces leaving other cities to the advancing militants have reported such practical failures as running out of ammunition. They have also been known to leave behind vast caches of weapons, which are then commandeered by ISIS forces.

The New York Times reports that ISIS’s recent victories illustrate a long-term strategy — the group has been biding its time, relieving other insurgent groups of territory, and now, with government forces in Syria and Iraq demoralized, they have renewed their offensive against both regimes. Residents in Palmyra, The Times reports, have by now lost any hope that their government can provide security against the militants.

The loss of Palmyra and the al-Tanf border gate means ISIS can link their territory in east-central Syria more directly with the land they hold in Iraq’s western Anbar province, according to the BBC. Meanwhile their stronghold in Ramadi is providing a base for a push eastwards — which could eventually lead to the capture of Falluja, a strategically important city near Baghdad.

President Barack Obama has admitted these victories are problematic, but insists that the coalition is “not losing” the war against ISIS. In a Thursday interview with The Atlantic, he said, “There's no doubt there was a tactical setback, although Ramadi had been vulnerable for a very long time… The training of Iraqi security forces, the fortifications, the command-and-control systems are not happening fast enough in Anbar, in the Sunni parts of the country.”

But many commentators have said that the recent victories should occasion a shift in U.S. policy in the region, which Obama has said is intended to “degrade and ultimately destroy” ISIS. The militants’ retreat from the Iraqi city of Tikrit in March seemed to indicate they might be on the defensive, but the latest string of victories has turned the tables once again. ISIS positions in Ramadi were the subject of intensive American airstrikes before the city fell, yet the militants were undeterred.

Afzal Ashraf, writing for Al-Jazeera, suggests that the recent victories reveal that “[t]he superiority of ISIL is in its leadership and the motivation of its foot soldiers.” He also suggests that the ponderous nature of the coalition approach has been impinging on their ability to react to the militants’ surge. “A more energetic strategy which uses the coalition's air strike capability in support of the Iraqi army may be the only way of tipping the balance against ISIL,” he writes. The example of Palmyra seems to bear this out. Officials fleeing the city told The Guardian that the American jets had not assisted in the fight against ISIS, leaving the government troops to attempt to hold the city alone. U.S. strikes were key in the successful fight against ISIS in Tikrit, and in Kobani, in Syria’s north.

Ian Black, The Guardian’s Middle East editor, argues that the victories have revealed the holes in the U.S.’s half-hearted and inefficient approach. Robert Gates, former U.S. defence secretary, appraised the situation thusly: “We don’t really have a strategy at all. We’re basically playing this day by day.” The U.S. plan to “train and equip” Syrian forces is going slowly, Black writes, while the Iraqi army is a problematic and under-performing ally. Moreover, Obama’s credibility in the region is extremely low. He concludes:

The fundamental problem is that Isis is waging war across two countries in a single interconnected crisis that is sustained by Sunni anger and the perception that the US and the west are content to look on as a confident Iran backs Shia groups in Iraq and beyond for its own strategic and sectarian reasons.

At least it seems that the U.S. may finally be making steps to develop their strategy. “You'd have to be delusional not to take something like this and say 'what went wrong, how do you fix it and how do we correct course to go from here?',” a top military official told reporters after Ramadi’s fall. White House press secretary Josh Earnest has said that the White House is examining “some areas where the strategy isn’t working as intended and needs to be upgraded.” Those upgrades will apparently involve empowering Sunni tribal fighters in the military defensive against ISIS.

The battle against the militants, involving as it does tricky sectarian tensions, inefficient and unstable local institutions, and a precarious regional balance of power, will not be an easy one to win.

More like this
Boris Johnson’s Leadership Is In Question – Again
By Bustle UK
Supreme Court Overturns Roe v. Wade
By Melanie Mignucci
Eurovision 2023 *Might* Be Held In The UK
By Sam Ramsden and Rachel Mantock
For These Abortion Clinic Volunteers, Going TikTok Viral Is A Risk Worth Taking
By Audra Heinrichs
Get Even More From Bustle — Sign Up For The Newsletter