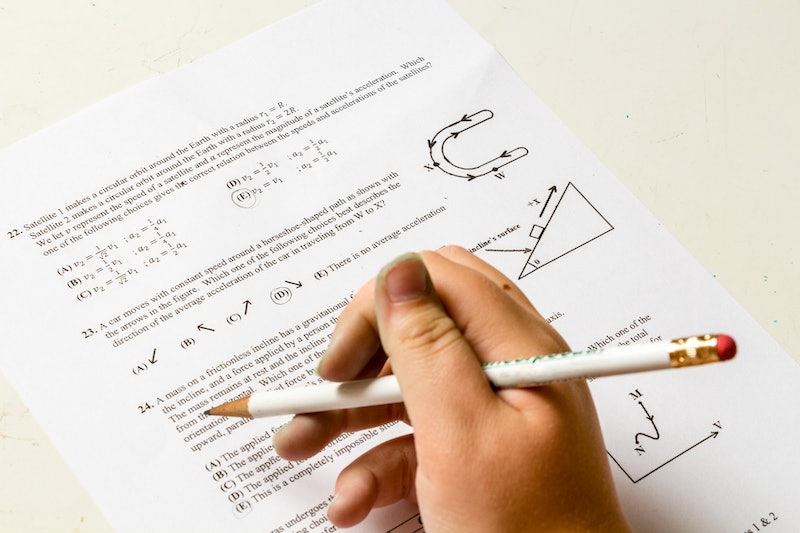 Things that are generally unpleasant include the absence of your favorite pastry from the coffee shop, getting up out of bed in the morning, and doing math (ever). When this impossible math problem for Vietnamese third graders made its way onto the internet today, it joined the ranks. Brought to us by an equal parts lovely and sadistic school teacher from Bao Loc, Vietnam named Tran Phuong, it is said to have laid ruin to the brilliant minds of those whose educations have prepared them their entire lives for such problems. It is the devil's conundrum, and you are the slayer. Really, though, if you can pull this off please let us know because according to The Huffington Post, it's "deceptively simple." And it seems to have been crafted for geniuses — eight-year-old geniuses. Phuong teaches third-grade-age kids, so if you can't decipher the solution, your mathematic prowess is hardly comparable to someone who's been on the earth about one fourth the amount of time that you have. This speaks to a serious educational dearth in the States, blah blah blah, we know. Math isn't exactly our strong suit relatively speaking, but we're working on it, okay? Here that problem is below.

As per Huff Post, the secret is to input the numbers 1 through 9 only once in each space, eventually adding up to 66. Based on the pre-written operations forcing either a subtraction, multiplication, division (the colon) or addition your placement of these numbers must be perfect in order to successfully manage. I call foul as this also means that this "one" problem is actually nine problems that are entirely contingent upon one another if you're going to become the talented SOB that gets this thing right. I'll remind you, this is rudimentary arithmetic for people who were just watching My Little Pony, like, a couple hours ago.

Phuong shares that he sent the problem to colleagues and acquaintances "including a doctorate in economics with mathematics," but that the answer has yet to have been correctly determined.

According to the lore that has built up around this monster, there is more than one viable solution so at least that's something. The secret seems to lie in getting a bit creative, writing out the problem as an equation as means to discover the elusive unicorn-like answer, as opposed to relegating yourself to writing in arbitrary numbers and hoping something sticks, like a friend I did.

More like this
Black Women's Equal Pay Day Highlights An Upsetting Problem
By Brandi Neal
The Spiritual Meaning Of Angel Number 000, Explained
By Kristine Fellizar
TikTok's Butter Board Might Be The New Cheese Plate
By Emma Carey
8 Completely Unserious Tips To Make Your Cuffing Season A Success
By Ginny Hogan
Get Even More From Bustle — Sign Up For The Newsletter