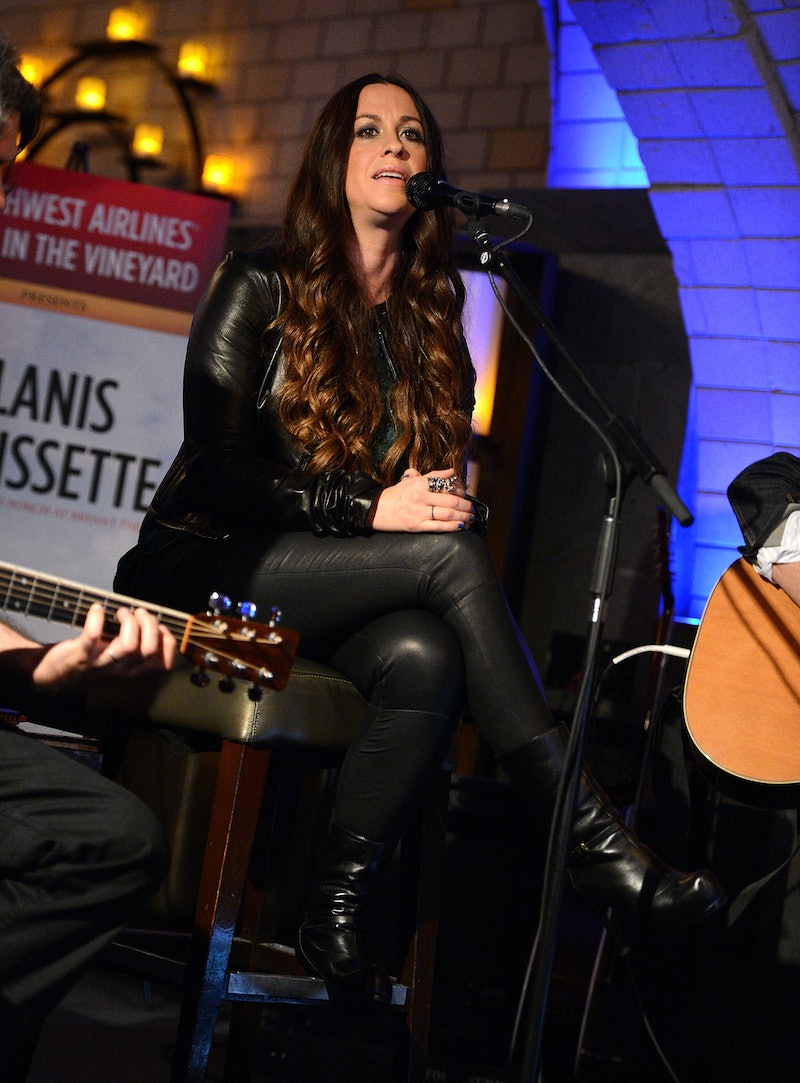 Too often, in recent years, Broadway has culled from existing pop culture. Adaptations like Matilda, Legally Blonde, and Newsies have garnered deserved good reviews, but it's easy for theater fiends to long for the days when Phantom of the Opera, Les Misérables, and Chicago premiered on stage before they hit theaters. But, on this Friday, all Broadway snobs should immediately lower their chins and give one another a high five, because Alanis Morissette is working on a Jagged Little Pill Broadway adaptation. Let me repeat: Alanis Morissette is working on a freakin' Jagged Little Pill Broadway adaptation.

This is great news for all: Theater lovers, angst lovers, and millennials who are confused by sexogenarians wearing neon jumpsuits in Mamma Mia!. Because Jagged Little Pill is primed for Broadway — the album's narrative is dramatic and risqué enough to appease those looking for the next Spring Awakening. And, according to Morissette, we should expect the adaptation to stay true to those adjectives: "I look forward to taking the heart of Jagged Little Pill and expanding its story, fleshing it out into ever deeper layers of emotionality, specificity, humanity, power, physicality, spirit and fabulism." We should be especially excited about that latter descriptor — fabulism describes "magical realism," meaning Jagged Little Pill on Broadway will be a more fantastical experience than singing the album from beginning to end in front of your mirror in junior high.

So let's hope Morissette works her magic... and makes these seven things happen in her Broadway musical. Because here's what we need to see in Jagged Little Pill.

Let's just get that out of the way. Duh.

Given the way Coulier forgot about Morissette after finding another woman who speaks eloquently, let's not give him the satisfaction of scoring a Broadway role. We'd all prefer to imagine Uncle Jesse in that theater scenario anyway.

3. "Your House" As the Emotional Climax

Yes, "You Oughta Know" is Morissette's most well-known angst-ridden hit. But, if you were like those of us who stuck around until the very end of "Wake Up" on the singer's CD, you would have heard the album's secret track, "Your House." And here's hoping you did have the patience to stick it out — "Your House" is not only melodically beautiful, it's the most emotionally powerful tune on Jagged Little Pill. It wasn't her writing! It wasn't her writing! Ugh.

4. "Hand In My Pocket" As the Final Ensemble Number

Because Morissette's "c'est la vie" tune deftly takes all of Jagged Little Pill's struggles and throws them into a surprisingly optimistic musical shrug. Because "You Learn" would just be cheesy, and we cannot leave the theater with "Mary Jane" or "Forgiven"'s sorrows stuck in our heads.

5. A Track Listing That Leaves Out "Perfect"

We all skipped that track anyway.

If there's not 10,000 spoons raining down on the stage during "Ironic," we're leaving the theater to find a knife.

Anyone trying to fit her shoes would, as "You Learn" taught us, be biting off more than she could chew. Because no one could deliver the emotion in Morissette's songs like Alanis. Well, except me after three drinks at karaoke. So, cast me?

Time for all of us to sing "Hallelujah" at a choir after hearing this news!