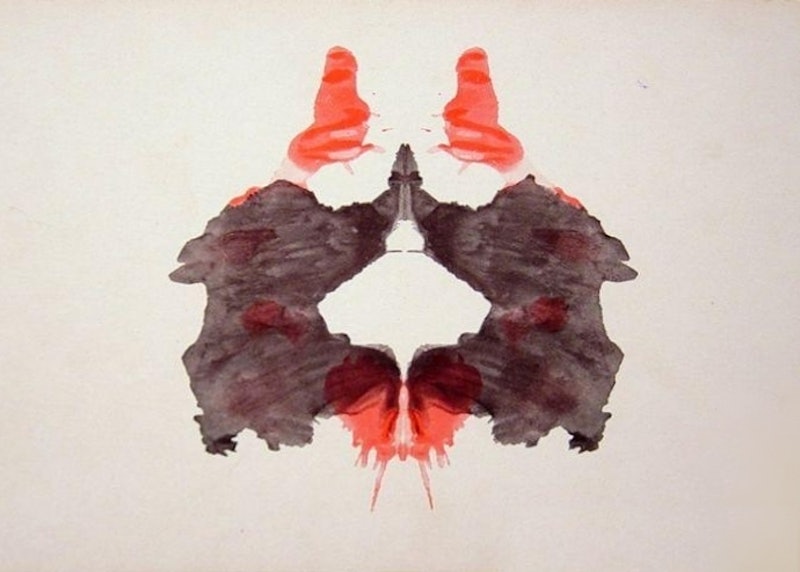 Log on to Google today, and you'll see a wispy inkblot. "Share what you see," implores Google Search in boldface, offering you the option to tell your Twitter, Facebook, or Google+ friends what you think the inkblot is meant to look like. Except — gotcha! The inkblot doesn't mean a damn thing, and Swiss psychologist Hermann Rorschach, born 129 years ago today, developed the test to secretly figure out if his subjects were schizophrenic. The infamous "Rorschach test" has since evolved into a personality evaluation, the idea being that your reaction to the blot speaks to your personality type — and so, now, you've shared the depths of your psyche with everybody who follows you on Twitter. God damn you, Google.

So what does your reaction to a shadowy inkblot say about you? Well, Rorschach believed that every part of your reaction to an inkblot image speaks volumes about who you are: Did you hesitate, then suggest that it might look like a bat? Did you immediately see three elephants fighting over a balloon, or did you just shrug and say "Uh, whatever, maybe a shadow?" Your response apparently speaks to what's going on in your subconscious: children from abusive homes are sometimes court-mandated to examine the inkblot, for example, and often see images of people fighting.

This blot was designed to look like human figures, and measures your approach to other people. If you hesitate on this one, and spend a while trying to figure out what's going on, then some analysts would argue you could be tentative, neurotic, and/or lack awareness in social situations. Three-quarters of people report that the blots look like humans, meaning that if someone doesn't see at least one human figure, this could indicate an unusual response to social interaction.

OK, onto Card II. What do you see?

The idea is that the swathes of red look like blood, and so your interpretation of Card II represents your response to anger. Let's say that you see two people fighting to the death — this might suggest that when someone pisses you off, you want to go all Game of Thrones on their ass. And if you saw two figures trying to make peace with their joined hands, you're potentially calmer in the face of violence. Half of the people who see this card think that it looks like two animals — dogs, elephants, and bears are the most common — fighting in the wild.

Don't panic if the blots still just look like inkblots, or if you've seen your worst nightmares inside those hideous shadowy figures. The accuracy of the test has been widely debated since its outset, with plenty of psychoanalysts believing that the Rorschach Test is about as accurate as the Farmer's Almanac. Even Rorschach himself was tentative about the blot being used as a personality test; he'd developed it only to diagnose schizophrenia. Still, a whole century later, the general consensus is that, yes, your interpretation of a random inkblot will say something about you.

Card IV is designed to test your response to authority. The huge, imposing figure, which seems to hover over the viewer — is most often described as an animal hide and/or a rug — and represents authoritative figures: your parents, the government, your boss, you name it. This one demonstrates your feelings towards authority, and, in some cases, the male sex. Your response indicates how you feel about the ruling presence in your life.

After seven wildly confusing black-and-white blots, people often express relief when they get to Card VIII, and sometimes say that it looks like a strange four-legged animal. It's the first multicolored card in the set, as well as the most complex, meaning that people who have difficulty processing information often stumble with this one. The breadth of colors apparently represents an emotional spectrum, and some people feel weirdly uncomfortable about Card VIII — in particular, those with a touch of social anxiety, or those who sufferer from emotional disorders.

There are ten distinctive inkblots in the Rorschach test, and 45 in the Holtzman test, a second-generation inkblot test designed to fix the errors in Rorschach's. (It was 1921, after all.) At present, it's the second most-used test to determine personality and is utilized across the psychiatric board — and you can absolutely be court-ordered to take it. There's a small problem, though: because the ten main blots have become so well-known, it's often argued that people know what responses to give before taking the test, which renders it completely useless.

Now if only Google could tell us what it sees, that would be a trip. Our guess: world domination.