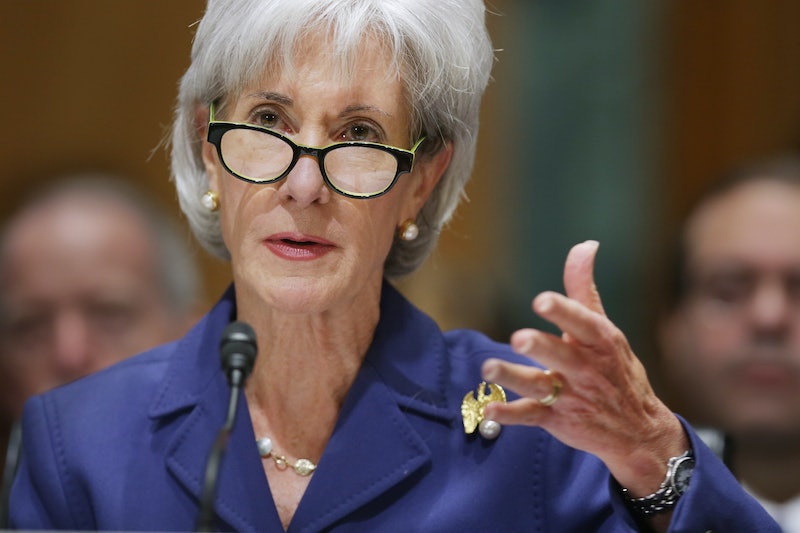 Friday's health insurance news is actually good: the Obama administration has set into action the last steps to make decent mental-health support part and parcel of insurance coverage for Americans. The new rules announced Friday, part of the Mental Health Parity Act passed five years ago by George W. Bush, prevent insurance companies from limiting mental-health care care and from raising co-payments. Plus, it ensures that outpatient and residential services are equal. The new regulations stand to benefit basically everyone, including carriers of almost all types of insurance, by making mental-health screenings and treatment more accessible for adults and kids. The idea is to budge America into treating mental-health problems the same way we treat physical ailments.

And with accessibility, Health Secretary Kathleen Sebelius believes, comes acceptability. "Just think for a moment how different things would be if everyone felt like they could access treatment without the fear of being judged," she said.

The new regulations have been called the "largest expansion of behavioral health coverage in a generation." It's a key part of the government's plan to reduce gun violence: In response to the recent spat of high-profile mass shootings, the administration aims to do a better job at safeguarding the mental health of Americans.

"The personal toll for families and individuals is beyond their experience,” said Sebelius. “This is a personal toll that we take on as a country to help people achieve the promise of recovery.”

The move is the only bright spot in the Affordable Care Act's most recent round of woes: 3.5 million people are close to seeing their insurance plans no longer exist because their plans are illegal under Obamacare, since their old plans didn't offer them enough coverage to meet Obamacare's tight standards. A lot of people are annoyed, because getting new insurance is a pain in the ass, especially with a faulty website.

A whole bunch of people are also pointing out that Obama said, quite clearly, that if Americans liked their health care plan, they could keep it. Since now they can't keep it, he's breaking all sorts of promises and hearts. For everything that's gone wrng, Obama is taking the brunt of responsibility: "When you've got a health care rollout that is as important to the country and to me as this is, and it doesn't work like a charm, that's my fault," he said. Then, he added an asterisk of "most likely" to his refrain, so the saying now goes :"If you like your current health insurance plan, you can most likely keep it."

The GOP is gleeful about, well, all of this. "If the president is truly sorry for breaking his promises to the American people, he'll do more than just issue a halfhearted apology on TV," said Senate Minority Leader Mitch McConnell (R-KY.)

But let's put this in perspective. The Affordable Care Act, regardless of its implementation bumbles, is a complete reform of the way Americans – currently more than 300 million of us — have been doing insurance for 237 years. That's already enough to shake up the good old status quo, but the really challenging part is that it's also a huge philosophical switch for the country: Americans going from taking the stance that only those who can afford healthcare "deserve" it, to one that proposes healthcare as a fundamental value that everyone must have access to.

We're also adopting a new perspective on medicine: That care for the mind is just as vital as care for the body. This represents another massive departure from traditional Western approaches to medicine. And, more importantly, with the premiums of the young and healthy meant to offset care for the elderly, it's a change in thinking from thinking about the individual to thinking about the society as a whole. That's a big deal. And for many people, it's going to take getting used to.

And, so, along the way, we're going to hear from the people who it doesn't work for — those, for instance, having to switch their plans. But while it's an inconvenience for them, the silent benefactors include the unemployed parents who can make ends meet, the creatives who don't have to depend on an employer for insurance to produce art, and the kids with asthma or pre-existing conditions who finally get coverage. And for the price of someone's two or three weeks of frustrating plan-swapping, we might just get more secure families, a movement of writers and artists and thinkers who can write and paint and think, and kids who could grow up to be a healthier generation.

So let's all just chill out, OK?