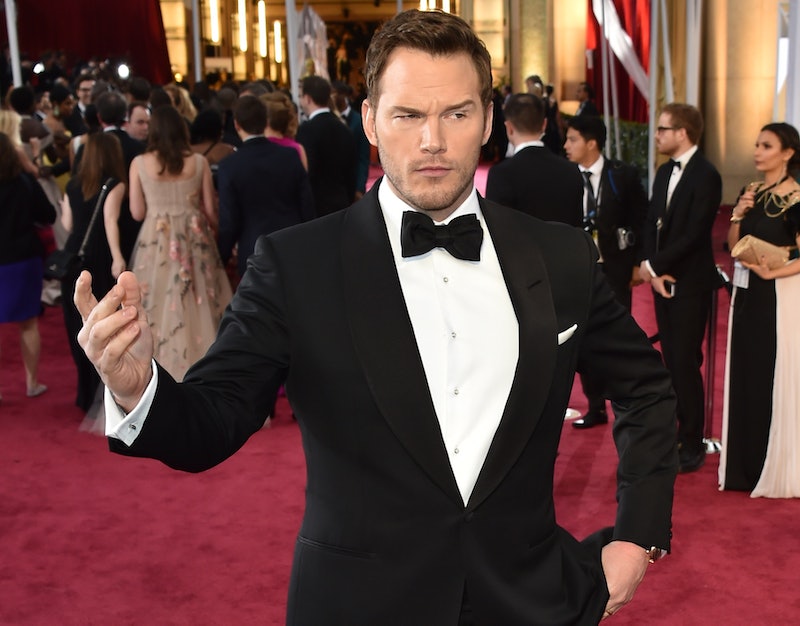 FINALLY! It's nearly here, everyone! The theatrical release of Jurassic World is upon us in just a few short weeks — it opens on June 12 worldwide, to be exact — which means Universal Pictures is about to send the movie's stars on the road to promote it, including funnyman Chris Pratt, who's pretty much delightful in everything he does. And while it's too early to judge the quality of his performance or of Jurassic World as a whole, it's not too soon for Pratt himself to apologize for anything he might say while on the press junket that offends people, since it's pretty inevitable.

Taking to his Facebook page on Friday, May 23, Pratt posted a statement that I imagine was rather tongue-in-cheek, since he was basically guaranteeing that he'll put his foot in his mouth in some interview and end up offending someone or other, for which he's deeply sorry. He's likely just poking fun at what must be a nerve-racking experience, especially if you're less comfortable with a constant barrage of reporters who will, in all likelihood, probably misquote you here or there. Whatever his motivation for posting the message, I think we can all agree that Pratt's awesome sense of humor remains thoroughly intact.

Joking about "JurassicGate" now, before this whole whirlwind promotional tour kicks off, not only endears Pratt, but also probably makes things a little easier for him, as well. It basically follows the old psychology of making fun of yourself for something before someone else can do it — it lessens the sting a bit, doesn't it? Sure, Pratt might be far from shy, but even the most outgoing among us would likely get a little bit anxious when faced with a barrage of journalists asking questions ranging from the inane to the inappropriately personal. I can see where he's coming from.

At the same time, his Facebook post also pokes fun at the sensationalism in entertainment news. The smallest, most insignificant turn of phrase could be doctored or twisted completely, and in print, becomes something it was never meant to be in the first place. After all, people are drawn to controversy, and knowing how the industry works — and subsequently poking a bit of fun at it — is half the battle won. Or, you know, at least it makes dealing with the ups and downs that much easier.

Point goes to Pratt, yet again.

More like this
Jennifer Coolidge Needs 'Legally Blonde 3' To Happen So She Stops Getting Hot Dog Jokes
By Jake Viswanath
Taylor Swift Wanted To Be In 'Twilight: New Moon,' According To Its Director
By Grace Wehniainen
Jonah Hill Explains How His Anxiety Attacks Will Change The Rest Of His Career
By Grace Wehniainen
Florence Pugh Won’t Discuss Harry Styles Sex Scenes In 'Don’t Worry Darling'
By Grace Wehniainen
Get Even More From Bustle — Sign Up For The Newsletter