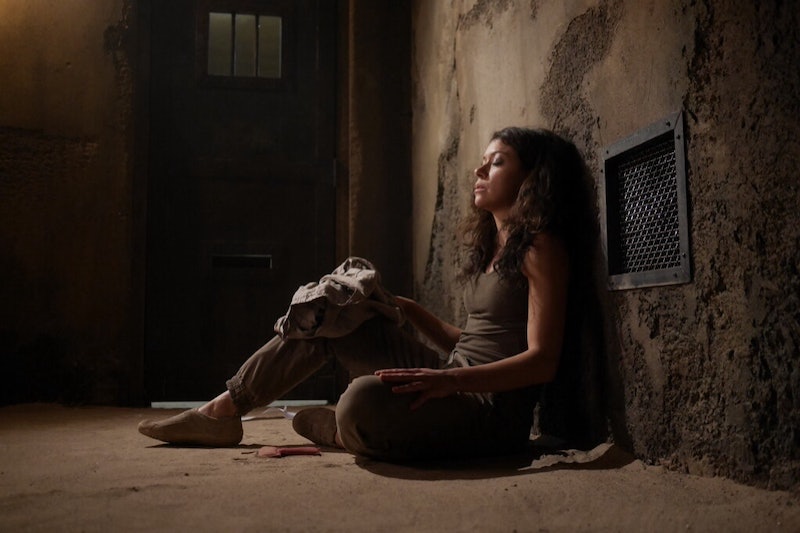 You can tell that we're inching towards the end of Orphan Black Season 3, because the clones are starting to hit the fan. "Certain Agony of the Battlefild" packed so many punches, twists and turns, it's hard to keep track of what exactly is happening to each clone. When everything finally starts to settle, one thing is clear — the clones are actually weapons. I know, I KNOW. Orphan Black is getting into crazy talk, but it's true. The clones are weapons, but what exactly is this weapon? Well, it sounds like it all has to do with their genetic defect.

As its been slowly laid out over the past few episodes this season, there's a defect in the clones. According to Dr. Coady, Clone MD, this defect affects the men's brains and the women's epithelial tissue. And also — fun stuff! — with the men, they can transfer the defect sexually, like a clone STD. That's a thought to keep you up late at night.

This is all part of some much bigger clone plan. It's part of some human sterilization plan, actually. The reason Dr. Coady is having the males keep track of who they sleep with is because she's now monitoring the women out there. Whatever this defect is, when it's transferred to a new female host it basically renders them sterile (so unless I'm told otherwise, I'm going with my theory that when Mark and Gracie slept together, his defect killed Gracie's baby).

Dr. Coady explains to Mark and a newly-freed Sarah, she didn't develop this defect, but she was the one to find in in the boys. Now she's just trying to understand it. Coady realizes what this defect (or as Cosima calls it, a protein) can do. It will leave many sterile, and kill many others, and basically wipe out an entire population without "spilling a drop of blood." She's letting the males go out and sleep with a bunch of women because she's in the process of field testing it. Dr. Coady is not going to win any Doctor of the Year award.

While this is all good information, it doesn't answer the question as to who first originated this defect, which is now turning out to be a weapon of mass destruction. Did Duncan realize it was there, and is the code he's written in his Island of Dr. Moreau book the counteract for it? Was he even aware that male clones existed, and that they could be used for harm? Were the clones created and THEN it was realized what kind of power they actually had? I like to believe that these human beings weren't created to be weapons in the first place, and that's accidentally what they became.

Bigger question, who is this weapon for?? If we're to believe that Coady didn't create it, she just found it, there's someone else pulling the clone strings out there. Is the government really behind all of this — and what government, anyway? It feels like Coady is working with the shady government behind the clones, but she doesn't offer up any name. It also looks like she might not survive to give us a name, considering that she was in range of Paul's grenade at the end of the episode. KABOOM Dr. Coady? Likely

Even without Coady — and Paul, and Miller the clone, and Rudy with the Scar — these clones are still a threat. There are still more male clones out there, and a few more episodes of Orphan Black left this season. Who's behind all of this? How much harm can these clones do — both to themselves and others?