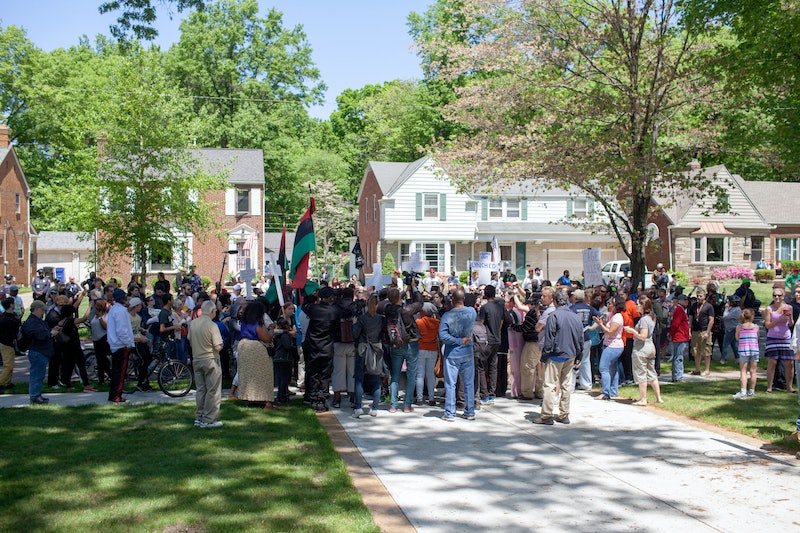 On Saturday, a Cleveland judge ruled in the shooting death case of police officer Michael Brelo, and the decision has set off a firestorm of criticism and activism. After a four-week bench trial, Judge John P. O'Donnell concluded that Brelo was not guilty of manslaughter in the 2012 shooting of Timothy Russell and Malissa Williams, meaning he'll face no criminal penalty over their deaths. And if you're wondering where to find the Cleveland protests, they've been making themselves felt in the streets and on social media alike.

Perhaps the most striking, highly visible act of civil disobedience to occur since the ruling was announced had a very specific location — the Cleveland Memorial Shoreway, where protesters blocked off all lanes of traffic.

This is a mode of protest that's been seen in other cities too, like Berkeley, California in the aftermath of the Eric Garner non-indictment in December. It's obviously disruptive to the public, but that's exactly the point of this vein of protest — demanding people's attention, rather than just requesting it. If your only proximity to the protests is through social media, you can follow on Twitter with the hashtags #BlackLivesMatter and #BreloVerdict.

The details of the case, as CNN describes, are grim. Russell and Williams were killed in 2012 after a 22-mile police chase — the result, according to the prosecution, of Russell's car backfiring, and the police mistaking it for the sound of a gunshot. When the chase finally ended, prosecutors said, Cleveland police (Brelo included) fired over 100 shots towards the car, after which Brelo stood on the hood of the pair's car and fired 15 more shots through the windshield.

However, O'Donnell acquitted Brelo, reportedly concluding that the chase and the officers' mistaken belief there was a gun in the car made them fear for their safety and the public's, and that it hadn't been demonstrated that Brelo's shots, and not the more than 100 prior, had actually caused the fatal wounds. Brelo's attorney Pat D'Angelo aggressively criticized the prosecution in a statement following the ruling, as detailed by Cleveland.com.

I've never in my 37 years as lawyer, witnessed such an unprofessional and vicious prosecution of a police figure.

So far, the protests in Cleveland are by all reports peaceful, and they're ongoing as the day draws to a close. It's important to remember that this issue goes beyond Williams and Russell, as well — it's still unclear what will happen in the case of slain 12-year-old Tamir Rice, who was fatally shot by Cleveland police officer Timothy Loehmann last year.

More like this
Dr. Anna Pou Is Still Practicing Medicine After Facing Murder Charges
By Brad Witter
'Children of the Underground' Subject Faye Yager Now Runs A North Carolina B&B
By Brad Witter
'The Capture' Is Finally Back – & S2 Looks Tense AF
By Sophie McEvoy and El Hunt
The Lionesses Are Calling For Equal Access To Football In Schools
By Sophie McEvoy
Get Even More From Bustle — Sign Up For The Newsletter