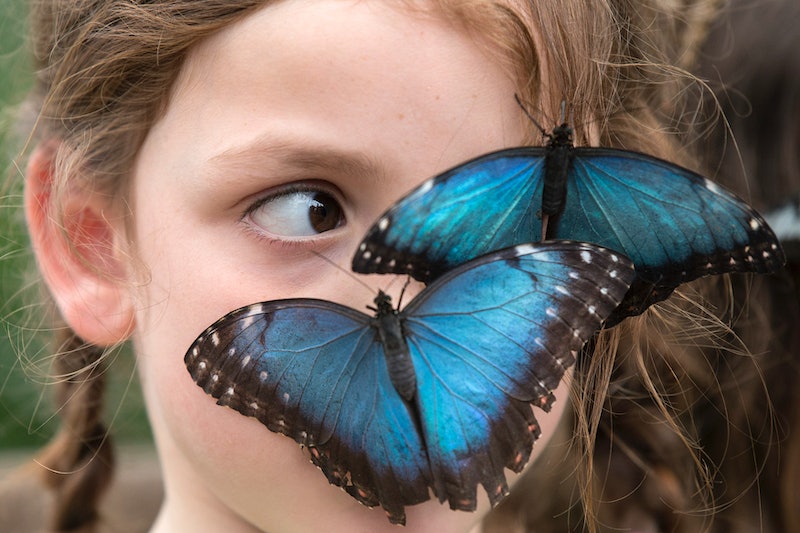 Although I've never been diagnosed with OCD, I’m pretty phobic about germs ... and the tips of food. While I can certainly see how someone might be a germaphobe, I think my latter phobia is a bit more obscure. For reasons I’ll never understand, the ends of bananas, pickles, those raw baby carrots, or anything phallic shape just creeps me the eff out. Not only can I not bear to consume them — I’d rather be stabbed in the eye — but just the look of them, all wonky in their appearance, makes my skin crawl. And if I see someone eating the tip of one of those foods, I feel all panicky and have, on some occasions, gagged out of both disgust and fear. Even my therapist has pointed out that it’s a bit odd.

Having phobias or hang-ups about random, inexplicable things is totally normal. (About five percent of people even have "clinically significant" phobias each year.) Even if we choose to not discuss them because they can be embarrassing, I don’t think there’s a single person alive who doesn’t have something that keeps them up at night.

In an effort to lessen the stigma, we asked Bustle readers what it is they’re randomly phobic about. From birds to plates to becoming an amputee, here’s what 20 of our readers had to tell us.

"I'm terrified of grasshoppers. When I was about five or six, I had a huge grasshopper fall on my head once while I was playing on the patio at my house. I remember combing my fingers through my hair and feeling it standing there all stringy and not being able to get rid of it. It was awful. Now, any and all grasshoppers freak me out, no matter their size. I can't be within a few feet of them— they're jumpy and unpredictable and icky and terrifying."

"Snakes. It's ridiculous how much they freak me out."

"Lizards! And India has plenty! (Someone please tell me if they will ever go extinct.) The second I spot a lizard begins my hysteria (shaking, crying, wailing and everything else). Maybe I am just imagining them to be dinosaurs in disguise, but they are too creepy-crawly!"

"House centipedes. I remember one night when I was in college, I saw one in my room and I prepared to somehow expel it from my personal space but it scurried away EXTREMELY QUICKLY and I didn't see it again for the rest of the night. I did not sleep that night. There have also been a few nights where I've seen one chilling and not moving ... They are EXTREMELY FAST and it's frightening."

"Amputees, and also becoming an amputee. But for some reason bionic limbs don't bother me? The amputee thing is very strange and specific."

"Dark water ... that could be driven by deep south roots and some sketchy boat rides as a kiddo. After attempting to learn to water ski, my family decided we'd go check out the gators. Scarred for life."

"Drowning. I'm absolutely terrified of it. I have been able to swim like a champ since I was five; there is no rational basis for it whatsoever. In fact, I once saved a drunk asshole in a lake who did about half-drown me thrashing around like a moron — and I was still fine. I suspect it's more the lung sensation of drowning that horrifies me, and that's probably due to my severe asthma, but in my mind, it's drowning in water."

"Sewer grates and swimming anywhere where I can't see the bottom."

"Needles. I freak out. I don't like my veins being touched especially with something sharp and pointy. Even if it's an IV. Can't do it. No shots. No blood drawing."

"Dry elbows. I know it sounds ridiculous, but ever since I had a mean teacher in third grade who had these disgusting dry elbows, I’ve had an irrational fear of them. I’m constantly moisturizing my own and make it point to avoid looking at the elbows of others. Let’s just say I prefer the winter to the summer when they’re all covered up."

"Birds. Birds scare me to the point that I can't even watch them on TV. Also the feather earring trend was a nightmare for me."

"Heights. I am fine being up high but I cannot jump from them. I will not even jump out of the back of a pick-up truck. Nope. F*ck that."

"Cancer. It's all I think about all day, every day."

"The floor moving beneath my feet. I hate parking garages and was the only one at work who parked in the lot. I have to leave my apartment when the guy downstairs uses his Nordic Track, because it makes my apartment tremble."

"Ticks. As in the tiny, disease carrying Parasitiforme arachnids. The fear stops me in my tracks often and most literally, and I'm obsessive about tick checks. Spiders are creepy sometimes, sure. But ticks are terrifying."

"I absolutely cannot take the plate, bowl, dish or whatever off the top. I have to take the one from underneath. I know it's illogical, but I feel like the top one could have had anything crawl on it or touch it. It's weird, but that's my phobia!"

"Structural integrity. If there are too many people or too much heavy stuff in a room, on a balcony, I'm an elevator. .. wherever, I will start hyperventilating and doing the math of how much everything probably weighs, where the support beams are in the building, and how we're all going to plummet through the floor to our gruesome deaths. Super unfortunate, because I live on the second floor of a creaky old building with my boyfriend's 600 pound piano and several hundred pounds of books."

"I'm absolutely terrified of birds. My four year old child has to shoo pigeons out of my path for me to continue walking down the sidewalk. I've always been terrified of birds — their beaks, their wings and talons — all things bird. I also get totally squigged out by teeth falling out, loose teeth, etc."

"I am frikkin' terrified of butterflies. More than any other bug in the world, including the ones that are actually harmful. I don't understand why everyone thinks they're so lovely. They're disgustingly hairy up close, and I feel like the zig-zaggy way they fly was designed to mask the fact that they're secretly following you. I also fully understand how crazy that sounds.

When I was in middle school, a friend of mine dragged me to the Butterfly Exhibit at the Museum of Natural History in Manhattan because she wanted to help me face my fear. I ended up being escorted out by guards, with my hands held behind my back, because one of the exotic butterflies had landed on me (of ALL people) and so I'd promptly screamed and swatted at it with reckless abandon. I think I killed it, but I was half blacked-out from the sheer terror, so I can't be sure."

"I worked in retail for 5+ years and I was, and always will be terrified of turning around too quickly and cutting my eyeball on those tall silver hangers used to hang all the clothes. I'm super short, so my eyeball is just the right hight to hit one of those."