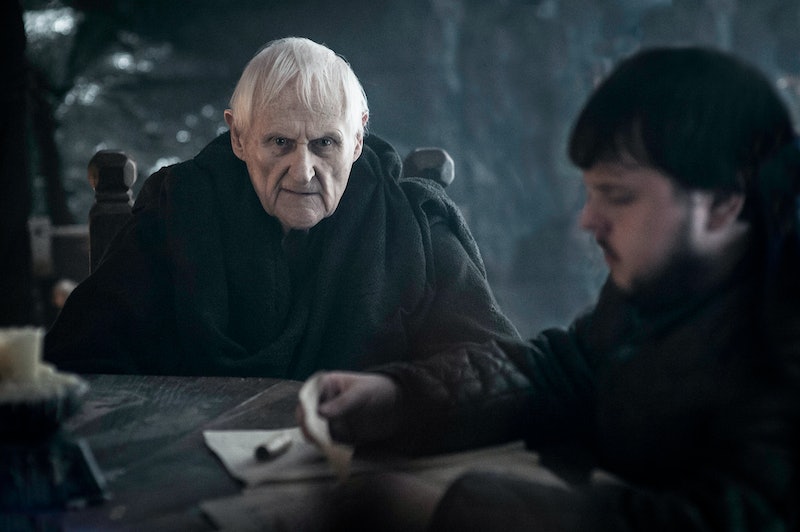 This season on Game of Thrones has had fans on edge about the popular theory that Jon Snow is a secret Targaryen bastard prince. This Sunday, we lost one of the last people who could have information about this mystery — Maester Aemon at the Wall. Aemon Targaryen dropped hints about Jon on Game of Thrones: The final words of Aemon Targaryen may not have been about Jon Snow or regarding any Jon Snow theory directly, but they're intriguing none the less. Be warned! There are major book spoilers ahead, even if they may never come to pass in the HBO series.

As Maester Aemon lay dying, he dreamed of his baby brother — Aegon Targaryen, father of the Mad King. In his dreams, Aemon called him "Aeg." That's cute! Just like a dragon egg. But was his brother the Aegon he was talking about? It makes sense that that's where his mind would go. However, that's a pretty common Targaryen name. Another notable "Aeg" is the son of Rhaegar Targareyn and Ellia Martell. You know, the kid the Mountain killed and Oberyn avenged. At about this point in the books, someone claiming to be the deceased Prince Aegon Targaryen appears in Essos. He goes by Young Griff, and even Tyrion Lannister thinks there could be some truth to his claim that he escaped death.

Unless... what if Jon Snow is taking the place of Aegon Targaryen? If Sansa Stark can take the place of Jeyne Poole, the HBO series could be combining these two stories. I'm not saying that Jon is the son of Rhaegar and Ellia. The "R+L = J" theory could still be true, but this would at least tell us Jon Snow's true name.

Shortly after his delusional scene with Gilly and Sam Tarly, Maester Aemon passed and was placed on a funeral pyre, but I'm interested to see whether or not the burning ritual actually took. Not all Targaryens are "dragons" like Daenerys that cannot be burned by fire, but if Aemon is like Dany, it would give Sam and Gilly a reason to go South and really shake things up.