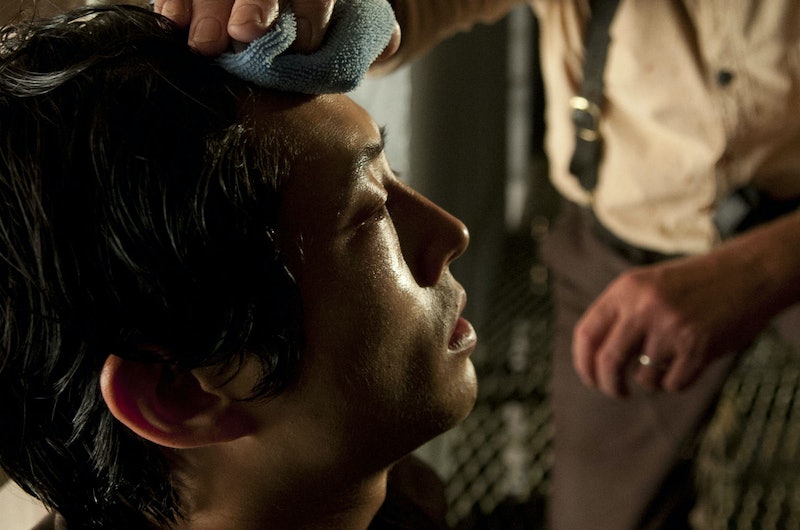 Last week on The Walking Dead , we were treated to a whole lot of zombies, a little bit o' whiskey, Daryl's angry face, and Carol's expulsion. But amid all that, we got almost no indication of Glenn's fate and with the rate at which that flu is ripping through survivors, it's only fair that we begin to worry. But I'm putting this out there here and now: if Glenn dies from the flu, I'm out.

It's not that I haven't come to terms with Robert Kirkman's assertion that no one is safe on The Walking Dead. It's not that Glenn (Steven Yeun) can't die eventually — at this rate, it's pretty clear everyone will die eventually. It's the fact that Glenn is by far one of the best characters we've got now that Carol's gone all murderous, Carl is back to killing, and Rick can't stop making a face like he's about to cry. Our heroes are down to Daryl, Glenn, and Michonne, with Maggie and Tyrese in supporting roles.

We've watched Glenn grow from a scrappy little pizza boy to the big man on (prison) campus, to a future family man in love. Letting him die at the hands of a pesky virus — and the sleepiest threat on The Walking Dead yet — is not an option. If we have to let him go someday, Glenn deserves to go out swinging, preferably against an adversary that we can actually see. Yes, watching Glenn die from something so intangible as a virus would make a point about the uselessness of strength, virtue, and tenacity in the face of nature, but we got that already. We don't need to really understand it by losing Glenn.

The fact of the matter is that The Walking Dead, while on AMC, is not Breaking Bad or Mad Men. We don't come here for social commentary. We ingested the series' bout of subtlety and introspection and conversation-riddled episodes during Season 2, when we were in the honeymoon phase and everything was as sweet as a Georgia peach. But now, the point of keeping a weekly appointment with The Walking Dead is suspense, with depth of story as the integral support mechanism — not the other way around. Since this flu took over, it seems to have sapped everything out.

The stories feel flat. The suspense is gone. Even the impossible situations Tyrese, Michonne, Daryl, and Whiskey Fiend find themselves in aren't all that impossible because Tyrese is apparently a walker-killing machine.

The only thing keeping us hanging on is the possibility that Daryl and co. will return in time with antibiotics and save Glenn. All we've got is the notion that we could prove Hershel and his pessimistic commentary wrong. Glenn's survival is all we have left. If he dies next week, when The Walking Dead decided to deal with the flu head on, we'll have nothing left.

And that's why, if The Walking Dead lets the flu kill Glenn, I'm out.