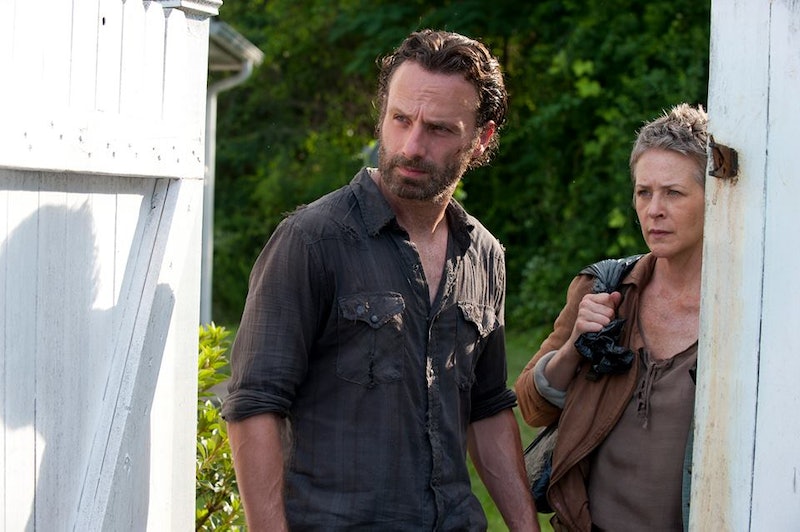 Some viewers of The Walking Dead are struggling to understand why the characters are willing to keep going, even though circumstances seem to be deteriorating quickly. This week’s episode didn’t seem to clear this up, but instead showed the indifference some of the key players are feeling towards their dire situation. Most of the prison is sick with a deadly flu, the Governor is still at large, and food supplies are running low. Oh yeah, and there’s the whole zombie apocalypse thing to deal with.

But, really, let’s cut to the chase: Carol has been banished by Rick! Carol said a lengthy goodbye to Lizzie before heading out on a seemingly routine run for supplies with Rick. The whole time they are out, Rick doesn’t talk about Carol’s recent murders. So, Carol finally confronts Rick and asks him what he thinks about what she did. Rick admits that it wasn’t up to Carol to decide who lived and who died — it was possible that Karen or David could have survived the flu. She said she was stepping up and was preventing the flu from spreading. Yeah, yeah, we know the story. Rick then gave Carol a long speech about how she has grown from the person she was at the beginning of the apocalypse. He think she is now a strong person who will make it on her own and eventually find a new group. (Hmm, how realistic is that?) So, Carol gets into a car and rides off. Is anyone else wondering how Tyreese will react when he finds out Carol murdered his girlfriend and then left group? ( ...And I guess it’s safe to say Carol and Daryl is probably not going to be a thing anytime soon.)

While all this was happening, Daryl’s group was still out trying to get medicine. Tyreese continued to be a loose cannon this week. The group had to chop vines off an old auto shop to get a new car. Tyreese’s rage was actually kind of helpful as they whacked through the tangle of weeds. But then he tried to fight a zombie with his bare hands (or kill himself?). After two close calls, maybe Tyreese won’t make it much longer?

As we may have picked up on during the Season 4 premiere, Bob seems to be an alcoholic. This caused a whole bunch of problems tonight. The group finally got all the medicine Herschel wanted from the veterinary school, all they had to do was make it out of the school alive. After tons of head chopping action and Tyreese’s-rage-was-actually-kind-of-helpful Part 2, the group made it out of a window. As Bob jumped out, he fell. (Oh no! Of course something goes wrong.) His bag, full of what we think is medicine, dangled into the hands of hungry zombies! Gasp.

The group managed to pull Bob and his bag back up onto the ledge, but as it turns out Bob’s bag didn’t have any of the medicine. Looks like he grabbed a little something extra — a bottle of liquor. So, basically Daryl is kinda mad at Bob for risking people’s lives for alcohol (for the second time). But, a few minutes later everything seemed okay as they started off back to the prison.

Every time a new character has been introduced this season, they are killed off in no time. This week is no different. While Rick and Carol are on their run, they go into a house and come across some people — yes, living people. “The kids,” as Rick and Carol refer to the young couple, are not too strong and had been holed up in a bathroom for two days because they couldn’t take out a lone “skin eater.” Rick gets to ask “the kids” his three questions, and they pass! Before returning to the prison everyone heads out to gather supplies. After Rick and Carol are done raiding a house for medicine, they come across one of the kids’ legs and realize she turned into zombie food. After awhile, the other doesn’t seem like he is going to return. Carol shrugs off this loss, so I guess we should too.

There wasn’t much of an update on the prison this week. All we know is that people are still sick and nobody made it back with any medicine... yet. Looks like we’ll have to wait until next week to find out the fate of the prison (well, mainly our beloved Glenn).