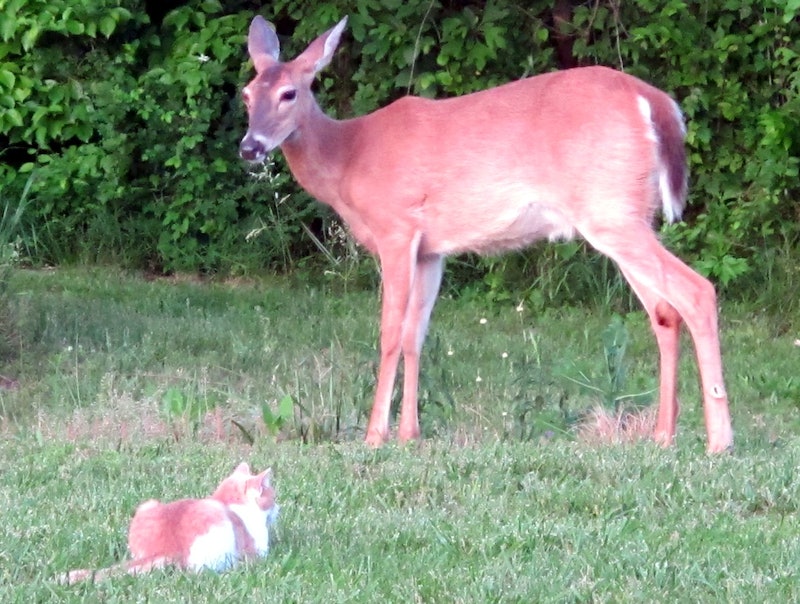 Russell the cat and Darla the fawn may sound like characters from a children's book, but they're actually real animals helping each other through tough times at the Emergency Hospital and Urgent Care in Raleigh. Russell survived a fire last year, when he was caught in rubble for days before being rescued and brought to the hospital. Darla, a newer arrival, was wandering around a local backyard, loitering on the porch, and trying to nurse on the dog of the resident who brought her to the hospital, the only one in its area that takes wildlife. The two animals hang out in the same room and even sleep in the same bed, the hospital's staff say. ABC's video of the Russell and Darla shows photos of them relaxing on a blanket together and nuzzling each other's heads, along with a video of Russell keeping Darla company as she drinks from a bottle. With Russell almost healed and Darla set to see a deer specialist who can help her survive in the wild, I'm anticipating some tearful goodbyes.

If a cat and fawn can be best friends, what excuse do we have to not get along with those of other cultures, races... or species?

Here are some more animal friends who can serve as examples to us all.

1. Tarra the elephant and Bella the dog

At Tennessee's Elephant Sanctuary, many of the elephants band together. But one particular elephant took to the sanctuary's dog, Bella, instead. The two became so close that when Bella was injured, Tarra the elephant stood vigil outside her house until the sanctuary employees brought Bella down to see Tarra, who is shown petting her with her trunk and foot. Sadly, Bella was killed (likely by a coyote) in 2011. The sanctuary workers were surprised to see no evidence of the attack nearby and to find blood on Tarra's trunk, as if she had carried Bella home. Tarra "became more reserved, quieter, she was depressed," said the sanctuary's CEO.

2. Clover the rhino and Bok-Bok the goat

After Clover's mother was killed by poachers, the baby rhino ended up at a preserve in Johannesburg and wandered over to a neighboring farm, where Bok-Bok started communicating with him through the fence. The two quickly became inseparable, following each other wherever they went. An employee of the preserve said Bok-Bok cries whenever she cannot find Clover.

3. Safi the dog and Wister the donkey

Barbara Smuts, who studies friendships between primates, observed a friendship form on her own ranch between her German Shepherd Safi and a donkey named Wister. At first, Wister tried to attack Safi, but gradually, his canine friend grew on him, and in no time he was braying outside the door every morning until Smuts let Safi out. Safi even taught Wister some tricks, such as carrying around a stick in his mouth, though “he looked like he didn’t quite know why he was walking around with a stick in his mouth," Smuts wrote in a paper about interspecies relationships. They even seemed to have their own language, she added, with Safi biting Wister's neck after he accidentally hurts her and him standing still as if to say "I didn't mean it."

“We know this is happening between all sorts of species. I think eventually the scientific community will catch up," Smuts told The New York Times. And hopefully, the rest of humanity will catch up in acknowledging the "human"-like qualities and emotions animals possess and the friendship they deserve from humans as well.