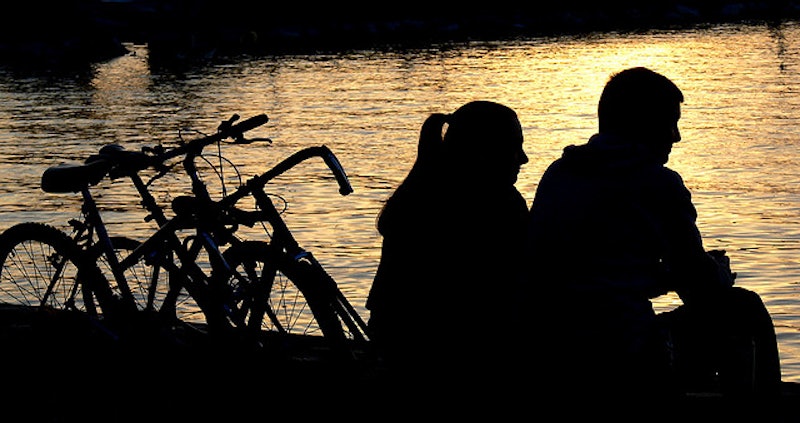 It’s happened to the best of us: cheating. Sure, there are different definitions of what constitutes cheating—flirty emails and texts or in-person, flirty behavior—but one thing is consistent: someone always get hurt. And on top of the pain, surviving cheating is a whole other issue. What do we do? Do we leave? Do we stay?

This woman submerged her boyfriend’s Apple electronic devices in water when she found out he cheated. Others take the cheating partner back, only for it to happen again. “I wasn’t going to risk my heart anymore,” said Katie, a New York-based Bustle reader in regards to finding out her boyfriend was having a fling with his trainer—for the second time. “I wondered why his sessions were always so long, and why he’d shower before going to the gym, but I trusted him when he said nothing was going on. I even met her while it was going on and she was really nice.”

Others say it takes work to stay together, and I agree. Both parties have to be invested enough in each other not to stray.

“Monogamy is not something that happens automatically because you make a one-time vow when you first commit to each other. Monogamy is something you choose every day, it is a gift you give your partner and yourself, it is a sacred practice like yoga or meditation. And with practice, you will get better and better at it.” - Tammy Nelson, PhD.

We spoke to Bustle readers about their experiences with cheating, and the aftermath. We also spoke to some experts on how to overcome it, if you want to overcome it. Here’s what they had to say.

“It's definitely possible to save your relationship/marriage after your partner has cheated. My ex-husband cheated on me and, after a brief separation, we reconciled. As you can see, I said ‘ex’ because we divorced five years later. The first cheating episode that I found out about was very hurtful and unsettling. But, after you've forgiven someone for cheating and have made a conscious decision to stay in the relationship, you have to leave it in the past.

The issue for me wasn't that he cheated once, but he continued to cheat over the entire marriage. We went to counseling and the whole nine yards. Unfortunately for me, he was just not interested in being faithful—plus, there were other issues along with the cheating that caused the divorce. It was definitely a lesson learned.”

“When guiding a couple to rebuild following infidelity, I explain the forgiveness steps.

Often with infidelity, there are multiple other deceptions such as lying, deleting emails, keeping secrets about ongoing contact. For each act, the steps must be redone. I recommend full disclosure about contact, but give the victim the power to ask for as much or as little follow-up as they needed. It’s important that the victim doesn't feel like they have to nag for the information. It can be hard for a couple to determine how much or how little checking the victim needs to feel safe again. A deception is a major withdrawal from the marital bank account and it is normal to feel trauma and lack of safety. It takes time to rebuild trust. If the perpetrating partner cannot be patient, safety will not be restored.”

“I have been cheated on a few times, all in different capacities. Each time, I ended the relationship. I know some people work and get past it, but with my abandonment issues mixed in, it’s not possible for me. I would just always wonder, ‘What’s he doing?’ or ‘Who is he with?’ and I don’t want to live like that.”

4. Jeffrey Sumber, Therapist and Author of Renew Your Wows: Seven Powerful Tools to Ignite the Spark and Transform Your Relationship

I am a relationship expert who works extensively with couples and folks who deal with infidelity on a regular basis. One of the most important things that must happen after the cheatee discovers the cheating is to allow the process of emotional reaction to occur before even attempting to make rational decisions.

As I detail in my book, Renew Your Wows , mixing facts and feelings is a losing proposition. They are a volatile compound that will inevitably lead to catastrophe.

So, the wounded party must have the opportunity to express their hurt, disgust, anguish, etc. without the other attempting to rationalize, defend, or plead for leniency. We must feel safe to express ourselves, especially in situations where we feel out of control. Once the emotional roller coaster takes place, it is essential to then attempt to regain a sense of control. We typically do this through collecting information and grasping the situation for ourselves. The wounded party must find out what they need to find out within reason. If they are still interested in remaining in the relationship, they typically will need access to social media, phone passwords, emails, etc., and if the cheater isn't willing to forego their freedom for a time, typically 3-6 months, then there is little likelihood that the relationship will make it past the wound.

“It happens, and it appears to be happening a bit more in our device gouged-times. Yes, it can be recovered from, but there is scar tissue. Every relationship has a code of conduct and the temperaments of the people who make up every relationship are different. That said, cheating in most relationships is a breach of trust and in an intimate space. Obviously, the nature of the infidelity matters, too (one night stand? who was it with? emotional cheating and your partner has fallen in love with someone else? ongoing pattern?).

Couples can and do get past it. But, as I always view it, it permanently changes the landscape of the relationship—where there was once wide open space, a mountain now exists and it is never going away. It is now part of the narrative of the relationship.

By understanding the origin of it, the nature of it, whether responsibility was taken, and the reasons for moving forward, work can be done to re-render the relationship (and sometimes, because of intervention, even stronger). Ground rules include: not being allowed to chronically use reference back to the affair as a weapon, but also for the cheater to realize there is a new world order and boundaries are tighter and mindfulness must be higher. Cheating does not have to be the nail in the coffin for a relationship, but it is a good thing to try to prevent because it can definitely weaken the infrastructure. As such, I often recommend to couples that they consider a course of therapy during the engagement phase, or at the time of challenging transitions, to give them the skill sets they need to avoid ‘careless fixes’ like inappropriate relationships."

“I was dating someone exclusively—she was the one who brought up ‘the talk’—and then I found out she was still flirting with other guys on dating sites. Definite dealbreaker. It made me paranoid during my next several relationships, until I met my wife, that is. So I’d tell people, if you don’t want to be exclusive, just be upfront about it.”

“This type of distress in a relationship stirs many other emotional barriers that interfere with the ability to move forward. Realistically, there are more couples still together after cheating, however, they have not let go. They hold the other hostage to their past mistake(s) and they never experience the freedom to love without resistance.

The couple must recognize the impact of the hurt and be willing to work through the different stages of change they are going to experience. The responses are similar to those who experience grief and transition through different grief cycles. You have anger, shock, and denial. Getting through the emotional distress is challenging for those with ambivalent feelings. It makes them feel that they are on a seesaw with no end. I would highly suggest that a couple that faces this seek professional help.”

“I am an infidelity expert, an infidelity survivor and the author of Ultimate Betrayal: Recognizing, Uncovering and Dealing with Infidelity. I've also run an infidelity support in my area for 5 years. Can all marriages survive infidelity? Certainly not, but the ones that do have several things in common: Total disclosure from the cheating spouse, a willingness on BOTH PARTIES to repair the marriage, NO contact with the other woman/man whenever possible, and REALLY HARD WORK to ensure any chance that the trust can be rebuilt. Here is a list of things I comprised for a cheater who wants to rebuild trust after an affair."

Will the marriage ever be the same? Hopefully not. Since an affair is typically not the problem in the relationship but rather a symptom of a deeper problem, working through the feelings and events which led to the affair can serve as a way for couples to tear down their entire relationship and rebuild from scratch. Sometimes, relationships end up stronger following an affair. More often, however, even when rebuilt, once one has experienced something as painful as a spouse’s betrayal, there is always a part of the victim spouse which remains stronger, more aware, more vigilant, less naïve, and less ‘unconditional’ than prior to the affair. This sometimes strengthens a marriage. But, other times, causes a wall to intimacy, which, in some cases, is never removed, just ‘lived around.’”

“I found out a few years (while on my honeymoon) that my husband had been cheating on me and had no plans of stopping. His smartphone, combined with his travel for work, made it very easy for him. In my current relationship we have a rule: Cheating is defined as anything we don't want the other to find out about. I recently caught my boyfriend breaking that rule using i-Chat, Snapchat and other social apps. I divorced my husband, but I've made the decision to work through this issue through counseling with my current boyfriend. Things aren't 100 percent, but I have faith they'll get there. I'm afraid many people out there are in one-sided relationships with cheaters and will never know, thanks to technology.”

"When looking at a couple when one person cheats, it's important to understand the cheater’s reason. Did he/she feel something was missing and felt the need to step out of the relationship? In regards to the person who was cheated on: What does the cheating mean to them? Are they able to forgive? Is there an identified pattern where cheating has been the outcome in the relationship in the past? Cheating often signifies a breakdown of trust and both people need to be honest when assessing if this is not only something that can be fixed, but that they both want to fix it.

More like this
The Best Time To Date After A Breakup, According To Experts
By Bustle Editors
The Top Mistakes Scorpios Make In Relationships (& How To Avoid Them)
By Nina Kahn
12 Ways You're Sabotaging Your Love Life
By Teresa Newsome and Lexi Inks
20 Things You Should Never Tolerate In A Relationship
By Rachel Sanoff and Kathleen Ferraro
Get Even More From Bustle — Sign Up For The Newsletter