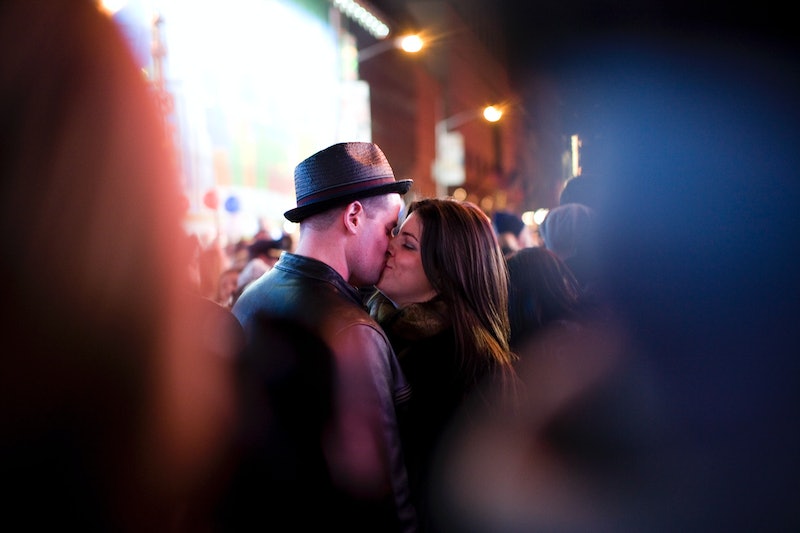 Some mothers may have bought themselves an unusual gift for Mother's Day—a membership to AshleyMadison.com, a dating site whose tagline is: “Life is short. Have an affair.” Last year, there was nearly a 500 percent surge in mothers signing up for the cheating site the day after Mother’s Day (!!), an increasing trend with the site since 2010.

Noel Biderman, the site's founder, thinks unmet expectations from Mother's Day may be the reason. Last year, he said in a press release:

“While Mother's Day might not have the implicit romance factor of Valentine’s Day or an anniversary, it’s a holiday that compels women to reflect on their relationships. They expect to be recognized for all their hard work throughout the year, whether it’s with a relaxing afternoon at the spa, or bringing some much needed romance to the bedroom. When expectations aren’t met, it can often be the last straw to trigger an affair.”

Personally, I don't think there's any excuse for cheating (how about trying couples counseling or getting divorced?), but "dating" sites that promote it disagree, as is evidenced by the many members. AshleyMadison says it’s the world’s second-largest Internet dating site (after Match.com)—it has 36 million members in 46 countries. (AshleyMadison’s sales were $115 million in 2014, almost four times more than 2009. As of April, 2015, AshleyMadison was so popular, it’s seeking IPO and wants to raise up to $200 million.) It's not a standard looking-through-profiles site like OkCupid and Match, though. Instead, members need to purchase credits in order to be introduced and start messaging someone on the site. Men usually initiate the conversations and there is no cost for follow-up messages. Credits are also used to "chat" with fellow members.

On May 2nd, this New York Post article came out about a woman cheating on her husband by using the adulterous site. She slept with three men and is currently chatting with others. She said:

“If there is one thing I’ve learned from the experience, it’s that mothers need to pamper themselves and have fun elsewhere if they don’t feel appreciated at home.”

Vice, too, covered the AshleyMadison phenomenon when an anonymous man in England, a college professor in his 40s who's married with two kids, wrote about his experience. A self-professed sex addict, he found a lot of scammers on the site, but eventually he learned how to discern them from actual women.

“I spent hours, days even, sending out messages to dozens of women. And it wasn't cheap. You have to buy credits that allow you to initiate contact, and having quickly done the sums on the back of an envelope, I found it costs about $2.50 for each woman you say hi to... My first few meetings were more like job interviews than dates.”

He had tips to share with others considering using AshleyMadison:

“My lessons are much simpler: Avoid the sugar babies, don't give out your real identity, and be ready to play the long game. It might cost more money and take more time than it used to when you were single, but stick with it and AM can help you ruin what's left of your marriage, eventually.”

Then, an anonymous female joined AshleyMadison and also reported her findings to Vice .

"Remember, this is a website for married people. You're meant to be everything that their significant other is not. Once they start messaging you, prepare yourself for venting and impromptu therapy sessions: 'My wife never wants to have sex!' or 'My wife is always nagging me!' It's exhausting, but there's an upside: When you're being compared with someone they've already lost interest in, it's impossible not to look great."

She also stated other benefits, including "no domestic or familial expectations... no encroachment on your independence... you'll only get the best side of him... he doesn't have time to be anything less than a Prince Charming knockoff."

The anonymous female on AshleyMadison also told Vice that she heard many excuses from men for cheating:

Even if all of the above are true—for men or women who want to cheat or already have—I still say look for other unhappy-in-your-marriage coping mechanisms first, like therapy.