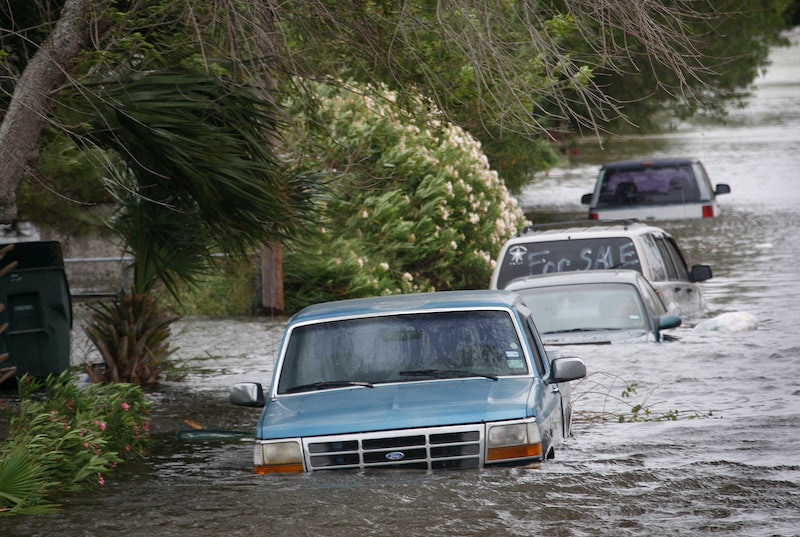 A second round of severe weather forced floodwaters even higher in Texas and Oklahoma on Monday, killing three citizens and leaving the families and friends of 12 additional residents scrambling to find their missing loved ones. Emergency officials in Hays County, Texas, told CNN that some of the missing residents were children. The tragedy comes on the heels of a major round of storms which have dumped over 20 inches of rain across the South since the beginning of May. With even more severe weather on the horizon, it's likely the barrage of rainfall will last for sometime.

According to the National Weather Service (NWS) in Corpus Christi, flooding along the Nueces River will likely last for weeks, if measurements are correct.

"The [Wesley Seale Dam] has reached its full capacity due to widespread heavy rainfall upstream across South Texas this month," reported The Weather Channel on Monday, citing a Declaration of Disaster signed by Nueces County Judge Loyd Neal last week.

Following a vicious deluge last Thursday, Neal warned that even with a temporary reprieve, dangerous conditions would only worsen with the coming weeks.

"The Nueces River near Bluntzer and Calallen are still on the rise ... [but] forecasts for the rest of the week will impact these projections," he said in a statement. "This water is two weeks away from arriving at Lake Corpus Christi ... [and] flood conditions could continue for as much as six weeks."

The Weather Channel reported on Monday that hundreds of homes had already been washed away by the floodwaters and hundreds more were still at risk as an even heavier barrage of water was predicted for the rest of the week.

Like California, Texas and Oklahoma have been experiencing fluctuating levels of extreme drought conditions since 2011 — which likely made the sudden downpours even worse. According to Sandra Postel, National Geographic's Freshwater Fellow, the hardened soil after a major dry spell can cause rainwater to initially run off into the rivers without making much of dent in hydrating the region.

"Drought tends to harden the soil," said Postel, in a 2013 interview with the magazine. "When rains do come, less of the water can absorb into the ground, so it quickly runs off the land."

In the case of Oklahoma and Texas, the downpours have lasted long enough that the soils did eventually begin to soak up that water — but now, they may be too saturated.

"It's funny, because now it’s rained so much that some lakes are closing," said Oklahoma City resident Trevor Aldridge, 31, in an interview with The Oklahoman on Sunday.

Once soils have reached their maximum moisture capacity, there's simply nowhere for the water to go, explained Postel. This has likely been and will continue to be the case in the South, according to the NWS.

Tim Kuhn, a hydrologist for Yosemite National Park, explained that the rising floodwaters could also have detrimental long-term effects for the local ecosystem, especially if the region has been hit with forest fires or other deleterious conditions.

"Without ground cover to shield soil, rain droplets directly contact soil particles and mobilize heavy metals that can contaminate water," Kuhn told LiveScience in December last year. "Loose soil can also increases the turbidity, or cloudiness, of water, forcing water-treatment facilities to work harder to supply clean water and potentially shut down ... [and] that's really fine sediment, so it takes forever for that to settle out."

On Monday, The Weather Channel predicted that "additional flash flooding and worsening river flooding" were likely over the coming weeks.

"A southward dip in the jet stream has been locked in place over the western states, allowing it to launch disturbances into the Plains," the channel reported. "Those disturbances provide the necessary lift in the atmosphere to trigger thunderstorm development as they intercept a warm, moist air mass in place near the surface of the earth."