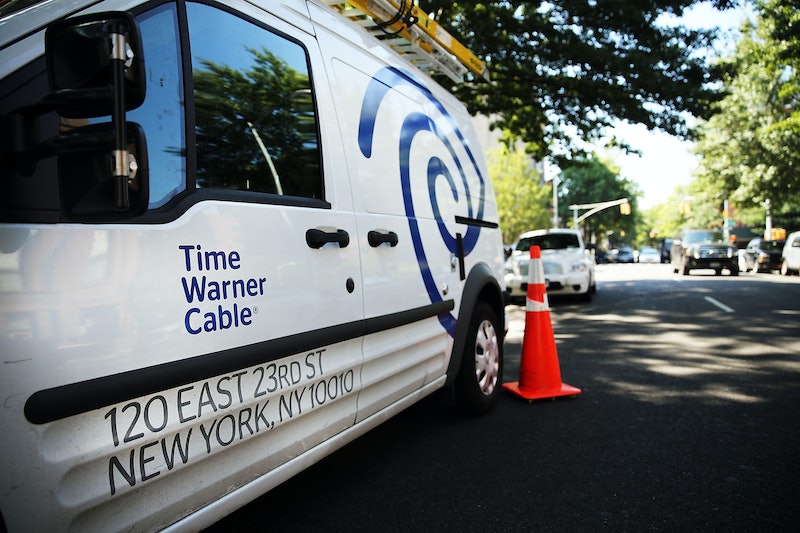 Another corporate mega-deal is in the works, and like others before it, this one has consumers worried. The $55 billion merger between Time Warner and Charter Communications, the second and fourth largest cable providers in the country, was announced Tuesday. A smaller cable company, Bright House Networks, is also set to be merged with the two telecommunications giants. According to Bloomberg Business, Charter has agreed to pay $195 per share (about 14 percent above Time Warner's closing stock price on Friday last week) in both cash and its own stock.

The new merger follows April's Comcast/Time Warner merger collapse, which had been priced at around $45 billion. As quickly as the dust had settled, Charter Communications kicked it back up again.

"[The Charter and Time Warner merger has] a very high likelihood of passing muster with regulators because of its size," said Matthew Harrigan, a Wunderlich Securities analyst, in a statement to Reuters on Monday. Bustle has reached out to both Time Warner and Charter for comment and is awaiting response.

The Time Warner/Comcast merger had been a national debate from the start, largely due to its size and the probability of a dominant market stranglehold. This time around, the bottom-up purchase and more limited combined powers will likely stay regulators' "anti-trust" concerns.

Regulators may also take into account the possibility of a establishing the newly merged duo as a prizefighter to square off against otherwise unchallenged Comcast, the market's largest provider.

"This deal will not be blocked ... because [with the Time Warner/Comcast merger] they were going to have a dominant share of the national broadband market," explained New Street Research analyst Jonathan Chaplin, in an interview with The Wall Street Journal on Monday. "The concern was they would use their market power in broadband to submerge the development of the over-the-top video market."

That's not to say the new merger wouldn't hurt consumers. It would still cover about 20 million subscribers in the cable market today, or about one in six households, according to CNN — not quite close to Comcast's 30 million, but still concerning for several reasons.

According to a report by the MIT Technology Review in April 2014, large-scale mergers which resulted in control over large pockets of the cable industry could be the first step in a long term game plan for many of the market behemoths — and they cited the words of Charter Communications' largest stakeholder, John Malone, as proof of the company's endgame.

"In prime time, about half of all the traffic on the Internet is Netflix or Amazon — in other words, it's video," said Malone in an interview with The Denver Post in July 2013. "As that trend continues, the need for greater capacity on the local distribution of the Internet really favors cable, and our belief is that cable will be able to charge more for higher speeds and greater capacity."

In a Washington Post op-ed on Monday, former FCC Commissioner Michael Copps pointed to the 2011 NBC-Universal/Comcast merger as yet another example of successful business maneuvering and its deleterious effects on the consumer, despite its glossy appeal to investors, calling it "one of the agency's worst decisions." At the time of the takeover in 2011, Copps, the vote's lone dissenter, told the Post:

[This deal] reaches into virtually every corner of our media and digital landscapes and will affect every citizen in the land. All the majority's efforts — diligent though they were — to ameliorate these harms cannot mask the truth that this Comcast-NBCU joint venture grievously fails the public interest.

The merging of mega corporations like Time Warner and Charter — while still not as heavy as the consummate power that Comcast currently wields — is undoubtedly good for business. But consumers will likely bear the brunt of the eventual market leverage with higher pricing and less options.

Like the anecdotal "bully in the schoolyard," as advocacy group Public Knowledge's John Bergmayer called it in a statement following the Comcast and Time Warner collapse, the new Charter/Time Warner deal may not look so scary at the moment given its relative size in comparison to other telecommunication mammoths — but give it a few months and the giant might swing.