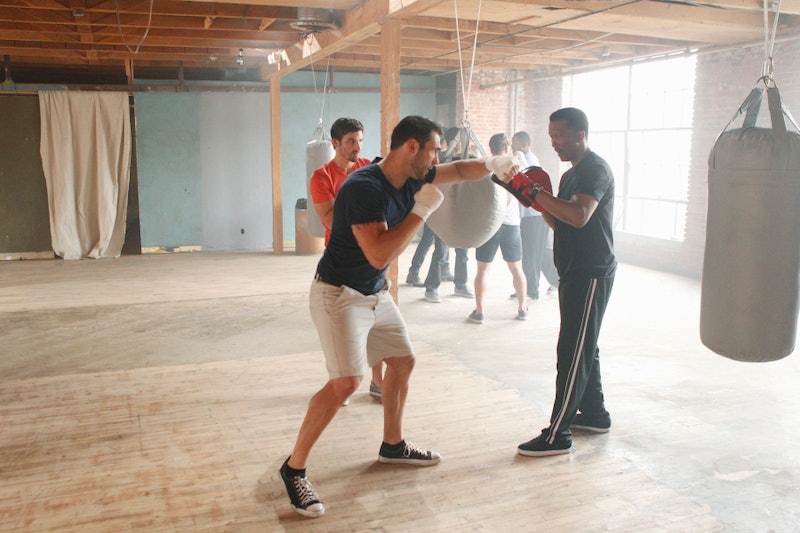 If you think the concept of a group date on The Bachelorette is bizarre, it just got even worse. ABC (or Kaitlyn Bristowe, but mostly ABC) decided to kick off this season's first date by taking the contestants to box with each other. I'm thinking the Bach head honchos had a thought process that went something like this: These guys who are already feeling competitive toward each other over the girl they all want to date? Yeah, let's put them in a boxing ring and let them fight this out. And even though the legendary Laila Ali seemed to think it was a great idea, a boxing date on the Bachelorette is actually the worst idea ever.

And the fact that this alienates the less athletic guys is barely scratching the surface. It's dangerous! People might get hurt! In fact, people did get hurt. Poor Jared ended up getting hit way too hard in the nose by Ben Z. — like, so hard that he ended up in the hospital and missed the rest of the date — proving that this might have been the most ridiculous/lawsuit-inducing group date in Bachelorette history.

The good news? It did eventually end in a little extra one-on-one time with Kaitlyn for Jared (and an impromptu makeout sesh) when he got back from the emergency room. So I guess all's well that ends well? Or something like that, because I stand by the fact that this date was a terrible idea.

And I'm not alone in this, either. Twitter definitely seemed to agree.

ABC, for future reference: Less violent dates might not be a terrible idea. Just saying.