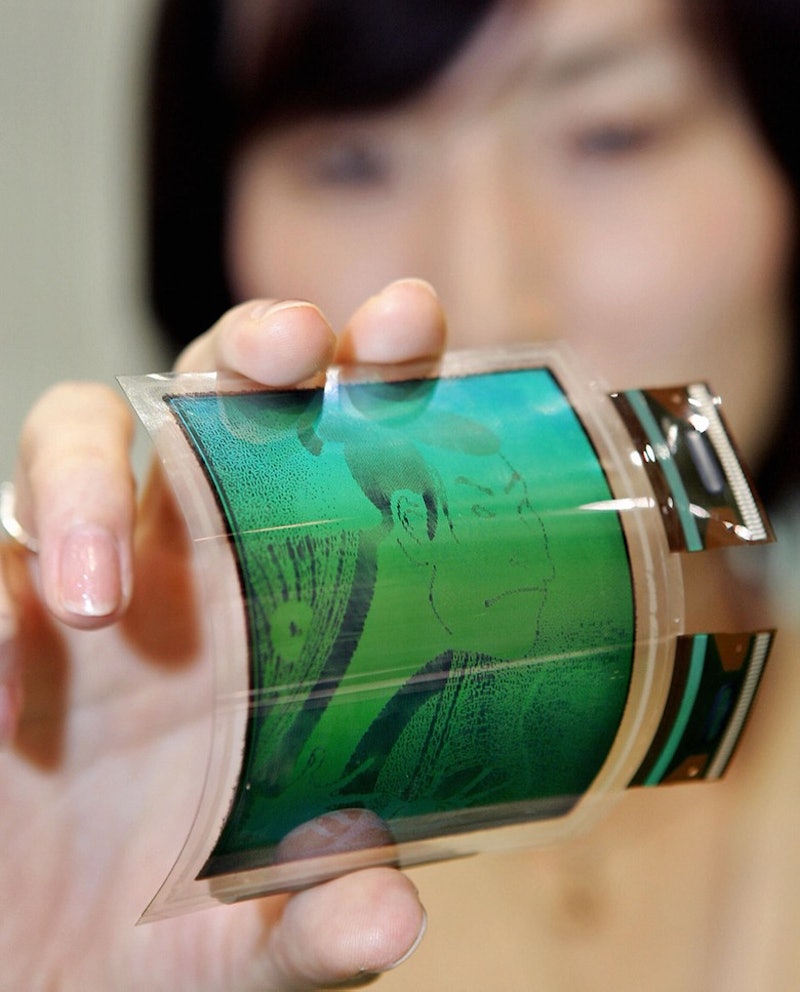 Ever looked at your smartphone and gone "God, I remember when I had to make calls using a home phone"? The pace of technology acceleration during this generation has been ridiculous: no wonder lists about "what '90s kids remember" reflect nostalgically on actually having a landline. But don't stop now: what's the smartphone going to look like 10 years from now, or 20? Will it be able to walk your dog? Predict your future? Lock your car for you and then drive it home?

Might sound facetious, but some of the more genuine ideas about the smartphone's future are even weirder, and seem straight out of comic books. (Hey, we have a Dick Tracy-style smart watch now; that idea comes straight from the 1940s.) We now live in a world where smartphone manufacturers are talking about phones that can diagnose you with diseases, fold up into tiny parts, be produced from scraps at home, and show you content that nobody else can view. If your eyes didn't boggle at any of that, you officially have technology fatigue.

Of course, just because people are talking about it doesn't mean that it'll happen. The Google Glass proved something else, too: just because technology exists doesn't mean it can integrate well into human society and how we work and interact.

So take these smartphone predictions for the future with a pinch of salt. Still, how cool would iris scanning be? I am SO IN.

One day, you won't need a code to get into your phone: you'll just have to have the right eyes. Fujitsu, a technology conglomerate in Japan, has unveiled a prototype phone that identifies its owner using iris scanning technology.

Fujitsu says it's particularly useful for people who want to certify online payments, which is an increasing function on smartphones: 40 percent of all Americans with a smartphone now use it to do banking of some kind. Irises, like fingerprints, are meant to be completely unique — but what happens if you have an eye injury and your phone locks you out? Let's wait and see on this one.

CNET raised an interesting possibility in an article on the future of smartphones back in May 2014: the idea that screens could be pixelated in such a way that their content is visible only to the user. It's inbuilt privacy to prevent prying eyes outside the screen looking over shoulders and stealing passwords. Dell, CNET mentions, has already produced software that warps the pattern of pixels on the screen so that they're only visible within a 60-degree range.

It already exists in a hardware form — Privacy Screen Protectors claim that, once stuck on a screen, the user will see the full display while anybody at another angle will only see darkness. It's likely to be integrated into actual smartphone tech pretty soon. This may mean that a lot more people watch pornography on public transport, though, so it's 50/50 from me.

It looks like the future of medicine is on your smartphone: a recent article in The Wall Street Journal documented the rise of smartphone-oriented health care, including the possibility in the very near future of a personal "testing" laboratory that can take tiny samples from your body's temperature and fluids, scan them, and send the results to a physician. The author, Dr. Eric Topol, even predicted smartphone-based X-rays. Considering that a new app was just announced that detects parasites in the blood using a smartphone microscope, this may not be in the far future: this may be available in the next few years.

Augmented reality has been the big new thing in mobile technology for a while now — but it's getting closer to being an actual reality. It's that technological concept of running your smartphone's camera over something — a street, a store, a restaurant — and having the screen identify and make suggestions about what it sees, from price options to online reviews.

It's tricky, because cameras aren't yet reliable or steady enough to make smooth identifications — but the day of seeing everything through a labelled screen is coming soon. Glasses apparently didn't work because they obscured our view, but viewing a scene through your smartphone is seen as less invasive and more viable.

"Modular" smartphones are basically smartphones built from scratch, without the fuss or engineering degree. Google's working on the concept, which basically means building a phone from the ground up to your own personal specifications. Their idea, Project Ara, will mean buying all the components you want and nothing you don't, slotting them together, and getting a working phone with everything you need. So, for example, if you just want a calendar, text messaging, a heavy-duty calculator and video, you can produce your own Frankenstein's monster.

The Huffington Post also points out that it'll help reduce waste: if one component stops working, you can just replace it rather than trashing the whole phone.

Graphene is the wonder material that tech and engineering nerds have been gushing over for a while now, and it's finding its way into smartphones. Graphene's cheap, incredibly strong, can conduct electricity, and is the world's thinnest material (it can be one atom thick) — and it won its discoverers the Nobel Prize for Physics in 2010. It'd be worth having it on your smartphone purely for the cool factor, but its thinness and strength would also make a touchscreen deeply sensitive and seriously hard to break.

If you ignore the fuss over bending iPhones, this is actually a pretty desirable quality. Who wouldn't want a phone you could roll up or fold to fit into a tiny space? While that seems completely bonkers, it's the big new frontier in smartphone research: several big companies are currently producing prototypes and doing research. LG and Samsung have both released "curved" models that claim to be the start of the flexible revolution.

It may be trickier than we think, though. Unsurprisingly, electrical devices might not take well to being bent regularly and stuffed into small pockets. There are some serious hardware difficulties in the way before smartphones can be bent and folded, but if you could have one that rolled up tighter than a lipstick, wouldn't you nab it?