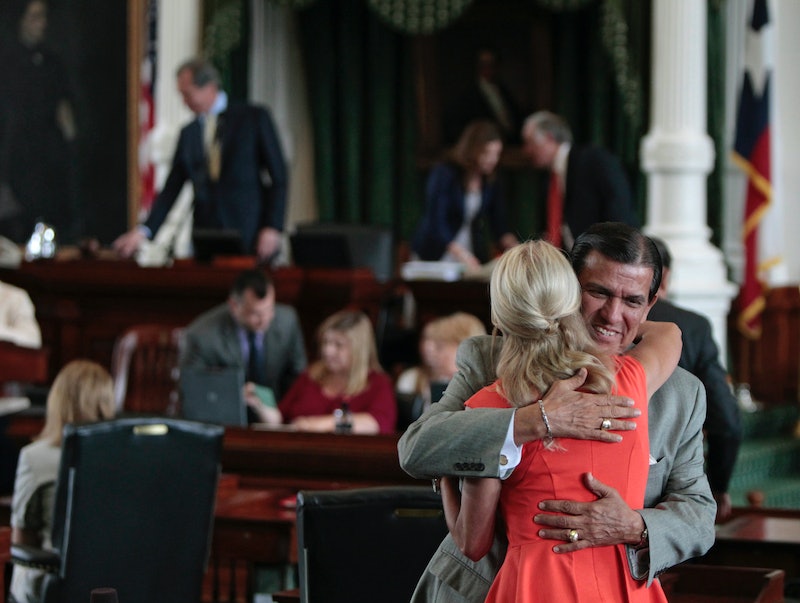 On Monday, the Texas State Senate voted in favor of a bill that would make it even more challenging for minors in Texas to obtain abortions, even in the case of rape or incest. The Texas House is expected to sign off on the bill, and Texas' Catholic and pro-life Republican governor, Greg Abbott, is expected to sign it. Coming from a state that has a long history of opposing measures related to ease of access to abortion, this news isn’t exactly shocking. What is disappointing and frustrating is that with so few Democrats in the Texas state government, long-time Sen. Eddie Lucio Jr. has consistently sided with Republicans when abortion policies are up for debate.

The bill Lucio voted in favor of Monday is intended to "close loopholes" in the state's current abortion laws that require underage women to have parental permission for abortions. This "loophole" is a bypass that allows women under 18 to request that a judge permits them obtain an abortion if they fear for their safety upon asking their parents for consent, or if they are for some reason unable to gain consent from their parents.

Under the new law, underage women will need to provide additional personal information (including home phone number and address — i.e. information where their parents can be contacted), and judges will be allowed to take additional time to come to their decision. Some Democrats pushed for an amendment that would allow for minors to obtain a bypass immediately upon request if the underage woman had been raped or abused by incest, but this amendment was ultimately thrown out based on Republican Sen. Charles Perry's indication that this bill is "intended to bring judicial clarity, and put more protections around the minor." Here the "judicial clarity" implies that it's up to the individual judge to decide what is best for the teenage women hoping to get an abortion.

To put it simply: this bill will make it even more difficult (some critics of the bill, including Planned Parenthood of Greater Texas, fear it may become virtually impossible) for vulnerable young women to get an abortion in Texas. In a state that has proposed no fewer than 25 abortion bills in 2015 alone (the most in the country) that would hinder access to safe abortions, Sen. Lucio's missing voice is needed.

Sen. Lucio's official government website touts his commitment to "access to quality healthcare." Given that he was the sole Democratic defector on this bill (and has been on other bills related to abortion), it would seem Sen. Lucio Jr. is not particularly interested in health care laws insofar as they would primarily benefit and protect women.

Abortion and easy access to it are the only areas where Lucio has consistently abandoned his party lines and joined conservatives. He has gone so far as to co-sponsor a bill that severely restricted abortion providers in the state of Texas. Texas SB 5 included bans on abortions performed after 20 weeks, even if the mother’s life was threatened, and defining life as beginning at conception. Based solely on his abortion voting record, it would be impossible to tell that Lucio identifies with a left-leaning party.

So what exactly is the deal? He has voted along party lines when it comes to gun control (not a popular ethic to impose in a state like Texas), as well as voter identification requirements. In the past, Lucio has justified (rationalized?) his votes to restrict women's rights on the basis of his Catholicism. Given that he was the lone Democratic maverick on yesterday’s vote that has more or less sealed the fate of young women who had this “loophole” as their only legislative beacon of hope, it’s safe to say he hasn’t been taking cues from other Catholics in government, or the Catholic church in general.

While of course we want to be sensitive to religious freedoms, Sen. Lucio is not the only Catholic Democrat in the Texas Senate, and in fact one of his Catholic colleagues vehemently disagrees with his stance on abortion. State Senator Sylvia Garcia is also Catholic, and has joined Wendy Davis in her amazing efforts to protect women in the state of Texas.

The Catholic church itself is by no means a feminist hero based on the Pope’s recent mandate that priests absolve women for having abortions, but this offers some indication that the church is trying to catch up with direction of Western politics surrounding the issue. I’m not a theologian, but it seems that if the Pope is willing to forgive and forget, and if voting Catholic Texans feel that these issues are important, Sen. Lucio should be willing to take a step back and rethink his years of votes against women’s rights.

Forward-thinking and feminist politicians have more than enough work cut out for them in Texas, with the Democrats the only likely representatives to support safe, expedient, and affordable access to abortion services, they really need all the votes they can get. Since they're clearly not going to get anywhere soon with this particular colleague, the Democratic party may want to start shopping around for a stronger female ally who will also generally side in favor of other progressive issues. Lucio is up for reelection in 2016, and since women in Texas need reproductive rights more than ever, let’s hope yesterday's vote marks his final countdown.