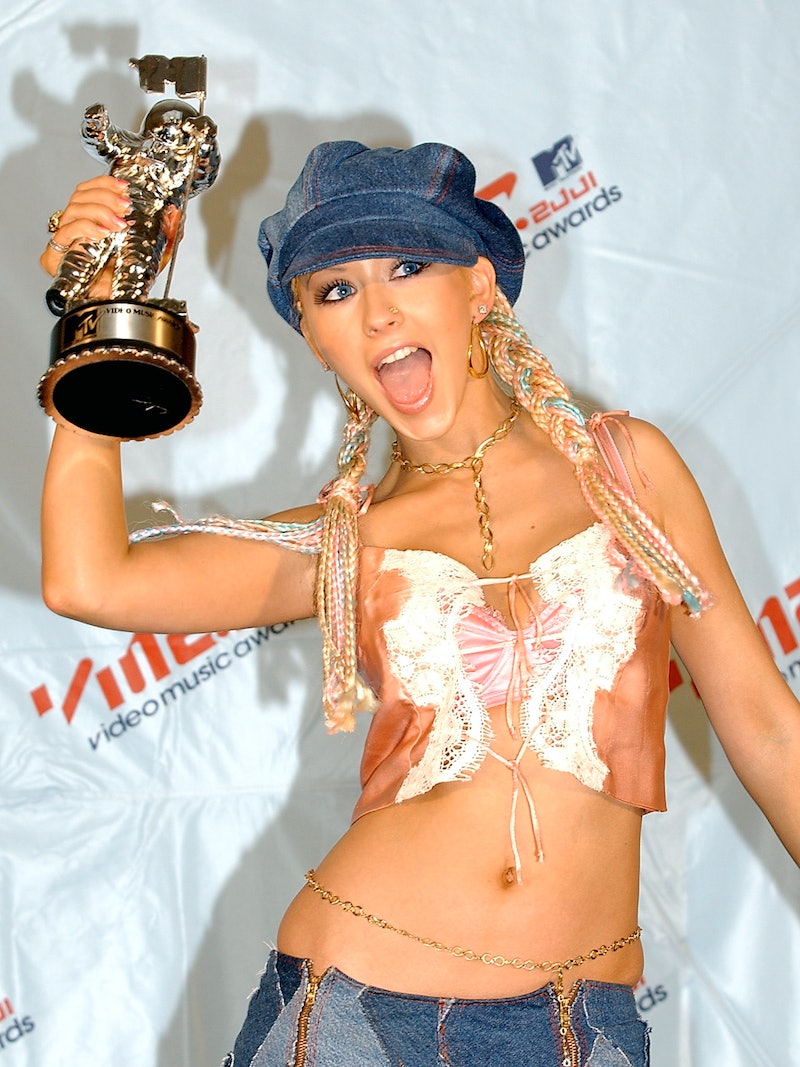 I have a confession to make: I spent the majority of my childhood being an insane Christina Aguilera fan. Like millions of other tweens (pre-teens) of the late '90s era, I shamelessly begged my mom to buy me all of her CDs and any magazine that Christina Aguilera was on the cover of. Most importantly, though, I copied Christina Aguilera's most popular '90s looks.

My eyes use to be glued to MTV's TRL, which is where I first laid eyes on Aguilera herself. Ever since I watched the music video to her hit single "What a Girl Wants," I was hooked. I definitely knew what I wanted — and that was Christina Aguilera's entire look. From the sparkly crop tops and leather pants (that my mom NEVER bought me and I am still mad about, BTW) to the two-toned colored hair, I craved it all during my childhood.

Aguilera was not that easy of a girl to keep up with, either. She always switched up her hair and sartorial genre, which can be expensive on a little girl's allowance ($10/week was a struggle). As we moved into the 2000s, we saw how Aguilera's music and fashions started to take a turn for better and worse, based on your own interpretation.

It's now 2015, of course, yet us '90s babies are still reminiscing back to our childhoods; aka, "The good 'ole days." But in order to completely take a look down memory lane, we must revisit Aguilera's most trendy '90s looks of all time. Obviously.

Aguilera was definitely the original Cheetah Girl when it comes to the cheetah/leopard print trend that she helped popularize in the late '90s. My mom bought me a leopard coat similar to this one when I was seven (when leopard was super trendy) and I cried tears of pure joy even though I was the only child with a faux-fur leopard coat in school. Kids definitely judged me on the playground, but I did not care because Aguilera had a leopard coat, too, and that's all that mattered.

Christina was known (notorious?) for rocking two-toned colored hair. My favorite two-toned hair color that she donned was the platinum blonde with the hidden, bold, red peeking out the back and ends. Sadly, this two-toned hair trend was one thing that my mom would never let me do. I would sneak and rub Crayola crayons in my hair (which did not work, but a girl was determined) to achieve Aguilera's signature two-toned hair color.

The two-toned hair trend has recently became popular again, which I am not shocked about at all. Aguilera's music video for "Come On Over (All I Want is You)" is proof that Xtina contributed to the ombre trend that is happening right now. No one can tell me otherwise.

OK, maybe she did not truly create this trend, but she added her own flair to an already popularized '90s style. From wearing fringed, cropped t-shirts to spaghetti strapped crop tops, Xtina wore them all and had everyone wanting to wear them, too. My mom still brings up how much money she spent on buying me crop tops as a child. It was well worth it, mom.

This is one of my least favorite trends that Aguilera helped create (it was a little too risqué for me as a teeny bopper). Nevertheless, this trend was a jaw-dropper that kept everyone talking for weeks. Seasons later, designers mimicked Aguilera's trendy scarf top by creating scarf dresses that wrapped in similar fashion to the scarf top that Xtina wore to the MTV Video Music Awards in 2002.

Again, Aguilera did not create the trend of micro braids, of course. However, she helped popularize a less universally trendy hairstyle of the '90s. Growing up as a young black girl, my mom always put braids in my hair due to my curls becoming tangled. Micro braids were (and remain) a highly-popularized hairstyle in black communities across the world. In my eyes, when Aguilera decided to wear them, she wasn't appropriating. She was appreciating. While Christina rocking micro braids can be viewed as controversial, I see them as a fun way to embrace other cultures by sharing other trends within those cultures.

Aguilera always wore funky hats under her wild, platinum blonde hair. I convinced my mom to buy me a couple of funky hats, too, just so that I could match with Xtina. My favorite hats that Aguilera rocked were bucket hats, though — another trend from the '90s that is making a comeback.

Belly chains were yet another trend that my mom would never let me wear because she claim that they were far too sexual. Nevertheless, the beautiful gold medallion chains that Aguilera wore on red carpets and music videos heightened the popularity of this look. Today, body chains remain statement pieces, evocative of confidence and self love.

More like this
How To Style Your Hair For A Festival, According To Maya Jama’s Hairstylist
By Tomi Otekunrin
Why “Patch Snatch” Ponytails Are Everywhere Right Now
By Tomi Otekunrin
The Secret To Taylor Swift’s Fringe, According To The Experts
By Orla Pentelow
15 Summer Hairstyle Trends That'll Inspire Your Next Chop
By Paris Giles
Get Even More From Bustle — Sign Up For The Newsletter