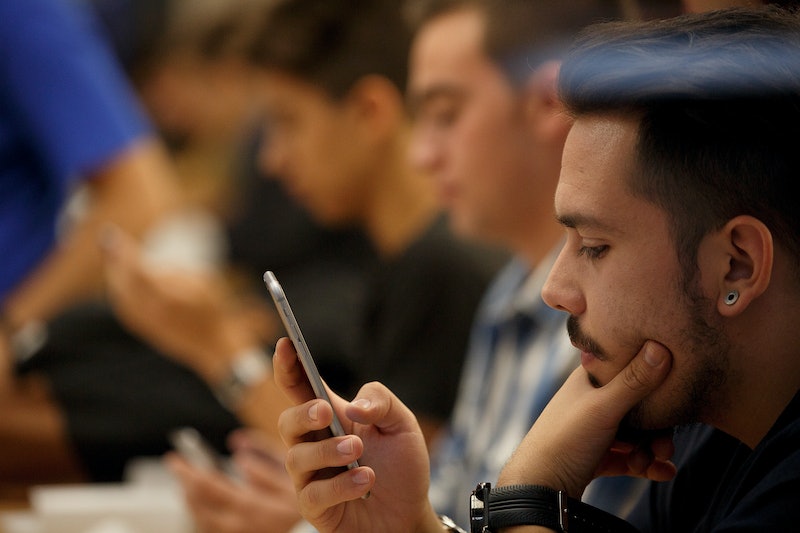 We've all been there: Your best friend just started dating someone new and she won't stop asking you for advice on how to text him back, what to say when he texts you that he's busy, how to respond to a goodnight message, what to tell him back when he says he misses you, and so on and so forth. If you're like me, you get irritated pretty quickly that your friend can't just seem to say what she feels and has to heavily orchestrate every response (while your pal likely gets irritated that you're being a bad friend) — but luckily for your SMS-happy buddy, there's an app for that: Textie, which lets other people answer text messages for you. It may be 100 percent genius for someone who is just too tired to craft a response to something... but it also might be 100 percent ridiculous. I'm honestly not sure which. Maybe it's both.

The app is relatively simple: You upload a message the other person sent to you to a forum, and then other Textie users post potential replies. The most popular reply is displayed at the top, and if you really, REALLY can't figure out what to say, you can pay 99 cents to get your question all the way to the top of the forum, too. So, you're basically paying people to communicate for you. But hey, no value judgement — sometimes you just don't know what to say.

It sounds kind of nifty, but at the same time, there are times that appropriate for Textie... and times that aren't. Here are four suggested do's and don'ts of using the app to ensure that you still remain an actual human being while getting all your text messages answered:

1. DON'T: Use it to resolve a fight with your significant other.

Only you know your significant other and the disagreement that's going on to it's fullest extent, and with complete context. While strangers might have some generic answers, it's worth it to think up your own responses, even if the situation is sticky and tricky. If you need help in this scenario, I would recommend asking friends who know the relationship and then tailoring their responses accordingly.

Since a ton of strangers are responding to your posting, it's inevitable that you'll get some silly stuff that'll make someone out there laugh good and hard. If someone texts you something funny and you don't have the perfect comedic answer, post the text on Textie. You're bound to get at least a few clever, silly, and snarky responses from people who may be funnier (or better at coming up with jokes) than you.

3. DON'T: Use it to respond to generic questions like "how are you?" or "how was your day today?"

Because seriously, you can do that on your own. Unless you want to send someone a joke-y response, in which case please refer to guideline number two.

4. DO: Use it when a parent has been nagging you all day to "get your life together" or "dump Zack, because honey, he's bad for you and you can do better"

Parents are wonderful and usually mean well, but if you have to craft one more new answer to why Zack isn't that bad, you'll lose it.

When it comes down to it, Textie could be a neat, useful thing that will enable people to better their communication skills and reach out to a large audience when they're feeling stuck. It could also turn us into robot-human who rely entirely on other robot-human hybrids to communicate. I would say that finding a good balance between when to use it and when it's completely unacceptable will ultimately encourage the former and prevent the latter.