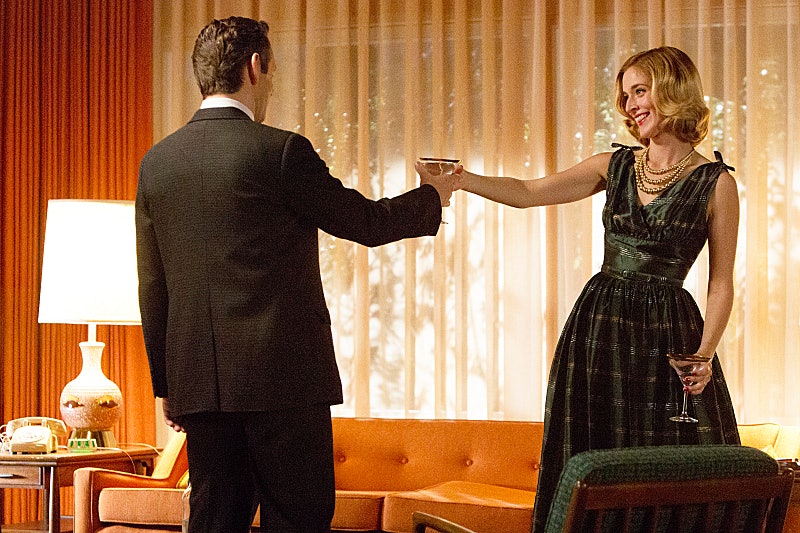 And… Masters and Johnson finally have sex. But let's not get too far ahead. This week's Masters of Sex graces us with a new intro with the simple objective of fitting in as many phallic references into a few seconds as possible. That corkscrew? Yeah, that bottle is getting a screw. [Rimshot.] Drink, please!

What's the least sexy way to have sex?

Well, when Masters and Johnson do it, they are not just wired up, but three inches apart at the lips with a grimace on both their faces that looks like they're counting. Virginia is blank-faced and just watching him orgasm, reach resolution, etc.

After, he says (not) sexy things like, "The Plateau State of the male subject lasted eight minutes and 31 seconds." Dirty talk, yeah.

She explains how Missionary gets a clitoral stimulation score of 4, so hence, she didn't orgasm.

What's the best way to show that Masters is super ornery?

Oh right, he fires a couple of secretaries on their first days for inane things like not being able to spell anesthesia. Thank goodness Beauvoir-reading Jane knows.

Do guys have to call within a few days after having sex?

Langham bumps into the Provost's wife at a super bougie club.

"Margaret," she corrects him.

"So we're… ," and he gives her a face that says he didn't call for a few days after.

But then, he gets snacks and milk and sex later, so apparently, giving that orgasm is what it's about. [Side note: This is not true in life. Men, women, everyone, don't be jerks. Call.]

Now that all these women are having orgasms and premarital (or extramarital) sex without consequences (so it seems), how will the writers show the sexism of the 1950s?

Oh right, Ethan Haas leaves a very naked and very glow-y Vivian in bed to accompany Virginia to the car dealership. She is being hounded by guys trying to give her "a great deal" (finally, not a sexual innuendo). He helps, and even co-signs her loan. Because while she has kids, "They don't make loans to single women," she says.

Libby loves babies! She goes behind Masters' back to ask Ethan to get her back on fertility work.

"Without it, I don't think I can compete," Libby says about the baby versus Masters' work battle. "Maybe one day, someone he does share a passion with will have more to offer him than his wife." Poor, put upon Libby.

What are the lengths people are willing to go to get laid?

Scully (who is supposed to be in New York for a business trip) drives to a shady alley waiting for (presumably) his male escort of choice. A blond-haired man comes up and asks if he can come inside the car. When Scully brushes him off, he says, "Everyone is wise to what happens in this neighborhood, you know. It's where faggots come to get fucked." Three guys beat him up and he's bleeding. The man he's meeting comes by and saves him — but he refuses to go to the hospital.

Later, Masters walks into the Provost trying to perform surgery on himself. "For god sakes, I know why you're not at the hospital and police don't know about this," Masters says.

Toward the end of the episode, Scully and his favorite male prostitute are together. Scully says, "You were under no obligation to care for me. You could have gotten hurt." The escort says, "I got jumped last year. Wished someone was there to help me."

Is all of this to make up for the fact that Masters and Johnson said in real life that homosexuality could be cured?

How much sexual rejection can a girl take?

After having sex with Johnson in the office, Masters arrives home late. Libby made martinis, and she's sort of drunk. "I've had a long, trying day," he says and heads to make some coffee for her drunken advances. How much sexual rejection can a pretty girl take?!

Well, she tells Virginia that it's stressing her out. "I can't continue this work if it comes at the expense of your marriage," Virginia tells Masters. And know what? He screws Libby that night so that he can get busy again with Johnson. Ugh.

Need more proof that men are the worst?

Margaret Scully tells Langham: "You have saved my life, Mr. Langham." Cut to him telling his psychiatrist about how he doesn't want to have sex with his mom. Are all the women "types"? The pysch says, "Until the bell you're trying to ring becomes animate."

Is having a simultaneous orgasm with your partner a unicorn worth chasing?

Masters of Sex doesn't break the old clichés of how orgasming together is some ultimate sign of emotional closeness. "To really anticipate someone's needs, that's a rare thing," Masters says about a good secretary.

And, in the Rocking Horse position (she's on top, they're both sitting and facing each other), Masters and Johnson orgasm together.

Post-afterglow, Virginia says they should eat. Masters says he has plans with Libby for a late dinner. And while Masters earlier basically had sex with Libby per Virginia's command, now Virginia seems disappointed as she wistfully looks at the bed.

More like this
Long Live Bennifer!
By Allie Jones
Why The '365 Days' Sex Scenes Are Good, Even If The Movies Aren’t
By Arya Roshanian
Everything To Know About Marvel's 'Echo' Series On Disney+
By Grace Wehniainen
20 Photos From The 'Stranger Things' Season 4 Premiere To Make You Feel Old
By Alyssa Lapid
Get Even More From Bustle — Sign Up For The Newsletter