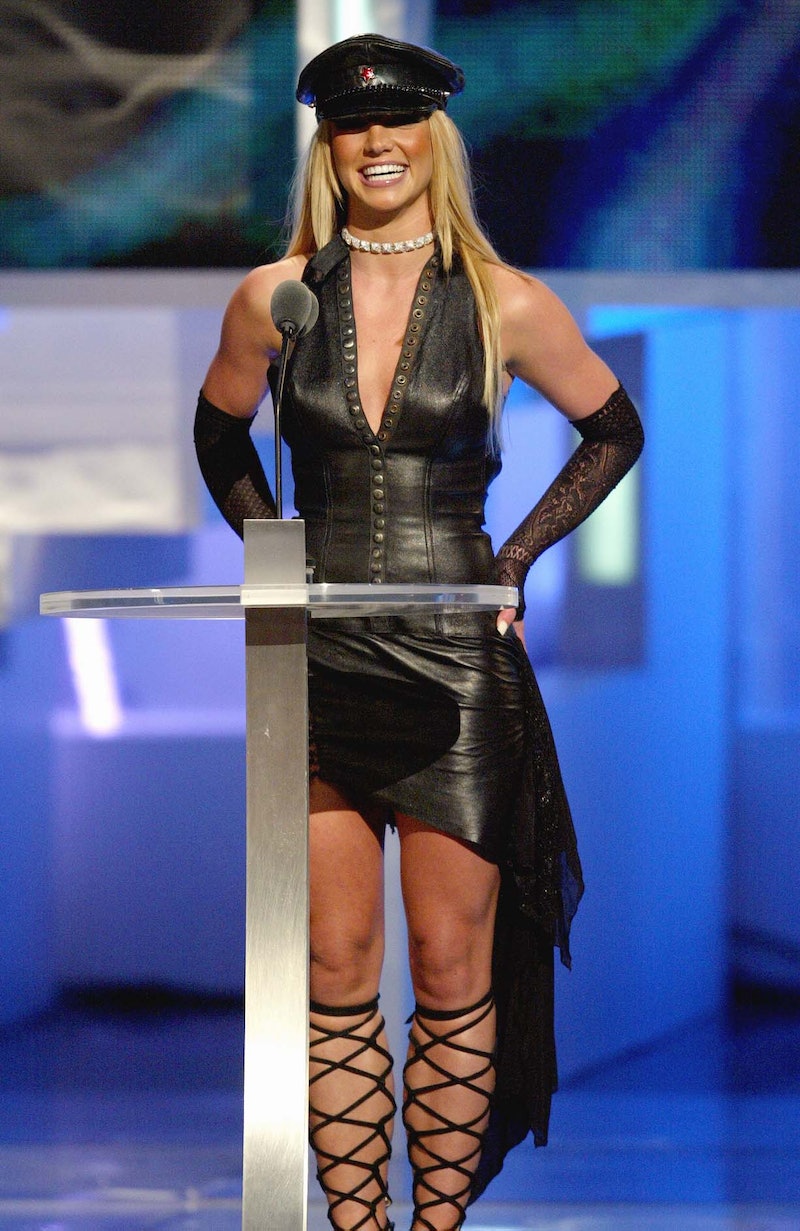 As a grown-up, I still ride for Britney Spears, and I have become acutely aware of how Britney Spears inspired fashion trends influenced me as a teen — and perhaps even today. Hear me out: When I was in my middle school and early high school years, I mostly hung out with a bunch of punks. I wasn't exactly a punk myself. In fact, I was secretly afraid that I would lose my glasses in a pit at a punk show. See? So not punk.

Unfortunately, I was so concerned with being cool that my true self only came out when my friends went home, and I was free to listen to an unlabeled mix CD of Britney Spears songs. It was only then that I became whole again.

Now, a lot of people see Spears as decidedly less than a style icon, and that's kind of true. Her brand was just about as high-fashion as a Sears catalogue. But that doesn't mean that she wasn't a major influence on the enormous masses of girls who spent their babysitting money on Lip Smackers and thought Delia's was fancy. Here, I've put together some of Britney Spears' most influential fashion moments, for all of us (now) grown-ass women who have vivid memories of what it felt like to touch those fuzzy pink ponytail holders for the first time.

I used Cover Girl's white eyeliner back in the day, and I remember being very confused about where, exactly, white eyeliner was supposed to go: On the lid? In the crease? In the corners?

Luckily, I had Spears in this video to help me figure it out. Here, her white-lined eyes are also blended with a touch of periwinkle blue, but the overall effect is chalky, bright, and totally awesome.

Known for rocking fedoras, cowboy hats, and even a few leather biker lids, Spears rocked headgear both in her videos and on the red carpet. I'm particularly fond of this clear plastic cowboy hat, because it's over-the-top and it absolutely knows it.

Spears commanded the pigtail scene right out of the gate, early in the video for "Hit Me Baby One More Time." And these weren't any ordinary pigtails, either: They were high, braided, and topped with two fuzzy pink scrunchies. They commanded attention, and all Spears' fans looked up to them and tried to live their message.

These were the Pope of Pigtails. And the trend didn't stop there: Spears wore pigtails in every other scene of this video. However, none of them compared to the pink fuzzy pigtails. You can bet that a version of those fuzzy elastics totally sold out at Claire's.

I have a fantasy where Spears travels to a land filled with crop tops. Crop tops are grown in fields, all the residents wear crop tops, and a crop top is on the flag (which is shaped like a crop top). When B travels there, humbled citizens fall at her feet, clutching their sobbing faces and trying to hold on to this magnificent moment.

Spears sits upon her throne (made of bronzed crop tops) and simply says, "Bow down." Britney Spears is the Khaleesi and Lord Commander of Crop Tops, and she wore hundreds during her career. Unsurprisingly, so did everyone else.

What better way to compliment your amazing shiny green crop top than with a pair of incredibly low rise jeans? I always felt too chubby to wear jeans like this comfortably, but I wondered if the girls wearing them worried about their clitorises (clitori?) accidentally popping out over their belt buckles. And while they may have been risky, by our standards, they were cool.

Granted, Spears wasn't the only one stoking this trend in the early 2000s; low rise jeans were a favorite of Christina Aguilera as well. Still, there's something about Spears' pink thong over her low rise jeans that takes her from Regular Pop Star Wearing Trend to Iconic Mons Pubis Fashion Influencer.

Completing B's Midriff Trifecta was her endless collection of belly button rings. She seemed to have a bejeweled ring for every single outfit, and given the fact that her exposed belly seemed to take on a life of its own over the course of her career, it only made sense to adorn it.

This accessorizing trend was wildly popular with Spears' fans. I guess having an enormous, Britney-esque belly ring made up for the fact that none of us were allowed to bring our snakes to school.

When we met her, she was just starting down what would be a long and tumultuous road. She became an international superstar before she turned 18, suffered a fate that I would wish upon no one (being dumped by Justin Timberlake), and, let's be honest, kind of lost it.

It was just at that time that I was entering into a more tempestuous phase of my young adulthood, and though I would never admit that I still listened to Britney Spears, I totally did. I also followed her Dark Period Fashion Choices, and frankly, remained inspired by them. Spears was never afraid to wear what felt right. Even if what felt right was a pair of dirty flip flops and a shaved head. For this, I will always love her.