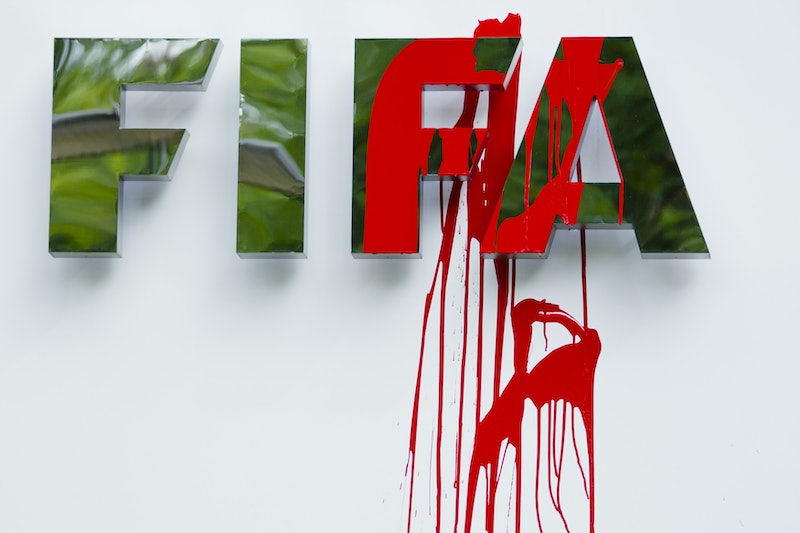 The soccer world — and I do mean, globally — has been hit with the biggest news for its governing body. The U.S. Department of Justice on Wednesday unsealed an indictment against top FIFA executives on federal corruption charges, which allegedly involves bribes totaling more than $100 million. But already in the early morning hours in Switzerland, seven FIFA officials were arrested at a Zurich hotel, according to the Swiss government. The indictment names 14 people on charges that include racketeering, wire fraud, and money laundering, but who exactly is being charged with FIFA corruption?

The soccer officials named include some of the organization's top executives, though it was unclear who exactly was detained in Switzerland. The arrests reportedly went quietly with at least one official being allowed to take his luggage, according to The New York Times. FIFA President Sepp Blatter, who has long fielded accusations of corruption within the organization during his tenure, is believed to have not been named in the indictment. The Justice Department released all 14 names Wednesday, which include:

Several sports-marketing executives were also named in the indictment:

Another defendant allegedly served as an intermediary to facilitate payments between marketing executives and FIFA officials:

The alleged deals, which reportedly date back two decades, involved World Cup bids and marketing and broadcasting rights, according to The New York Times. The arrests are unprecedented in FIFA's history, which has long been marred with scandals. There's already chatter that more names could emerge in the coming days. Electronic data from FIFA's headquarters in Zurich were also seized by Swiss authorities Wednesday. The Swiss Federal Office of Justice also announced it is questioning 10 people who took part in the controversial voting that awarded Russia and Qatar the 2018 and 2022 World Cups.