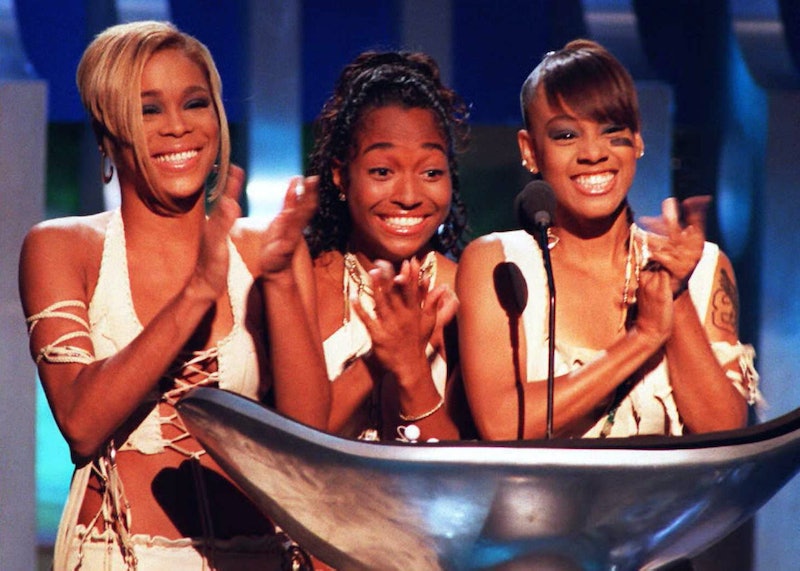 TLC was, without a doubt, one of the best groups to come out of the '90s. Their debut album, Ooooooohhh... On the TLC Tip, came out when I was only 8 years old and it was the first tape I owned and basically played until it unwound itself inside my Walkman. They were simpler times, obviously, and while I may not have been able to fully understand some of the serious issues TLC sometimes sang about, I felt them, and they made some amazing contributions to R&B and music in general. Basically, what I'm saying is that TLC was the best, and this is not up for discussion.

While the group was changed forever by the untimely passing of Lisa "Left Eye" Lopes, TLC has continued to pursue music, though the two remaining members — Rozonda "Chilli" Thomas and Tionne "T-Boz" Watkins — have never quite managed to recapture the magic of the group's '90s success. But so what? For years, they released a slew of hits that most of us still know the words to today. And while singles like "Waterfalls" and "No Scrubs" will remain on our karaoke playlists forever, it's never too late to go back and re-live some of the tracks you didn't love as much as they deserve the first time around. You ready? Let's do this.

I know this song was popular, but did we really appreciate it, since CrazySexyCool was such an immensely popular album that spawned four singles that reached the Top 5 of the Billboard Hot 100? "Diggin' On You" was the final single to be released from the album, but it's one of the best, too.

"What About Your Friends"

This is another track that everyone knows, sure, but it never really comes to mind when you think of TLC songs. From their debut album, "What About Your Friends" was refreshing not just musically, but in terms of topic. How many awesome songs are out there about friendship? Not nearly enough, I say.

"Creep" was like a faster-paced version of "Red Light Special" without the overtly sexual cooing throughout, but the latter takes the cake for being sultry and salacious without being obscene. Although, that being said, the group did release a "dirty version" of the track, so... you know.

"Something Wicked This Way Comes"

I'm only vaguely ashamed to admit that I sat and learned the entirety of the rap from this song when I was 11, and I used to play it over and over again because I loved it so much. This song was not only amazing for TLC, but it featured the amazing Andre 3000, which made it a double whammy.

"I Miss You So Much"

A later release, "I Miss You So Much" was taken from TLC's 1999 album Fan Mail, which never got quite as high as it should have done on the charts. This one was co-written by Babyface, who had the smooth love songs down to an art, and I still love listening to it today.

"Baby-Baby-Baby" was the second song from TLC's debut album, and another one of my favorites. The video just makes it even more amazing, especially when you watch it back now, 23 years later (God, I feel old). The fashion was on point, and this song still holds up over two decades later.

Another track from CrazySexyCool that never got the love it deserved because there were too many other amazing songs on that album and we couldn't pay attention to them all. It's never too late to start, though. We can do this!

More like this
Zach Gilford Admits He Forgot Taylor Swift's Name When He Starred In Her Music Video
By Jake Viswanath
Britney Spears Shares & Deletes Photos Of Justin Timberlake From 22 Years Ago
By Jake Viswanath
20 Years Ago, J.Lo Was Supposed To Kiss Madonna With Britney At The VMAs
By Jake Viswanath
Victoria Beckham’s Spice Girls Audition Was V. Theatrical
By Sam Ramsden
Get Even More From Bustle — Sign Up For The Newsletter
From hair trends to relationship advice, our daily newsletter has everything you need to sound like a person who’s on TikTok, even if you aren’t.