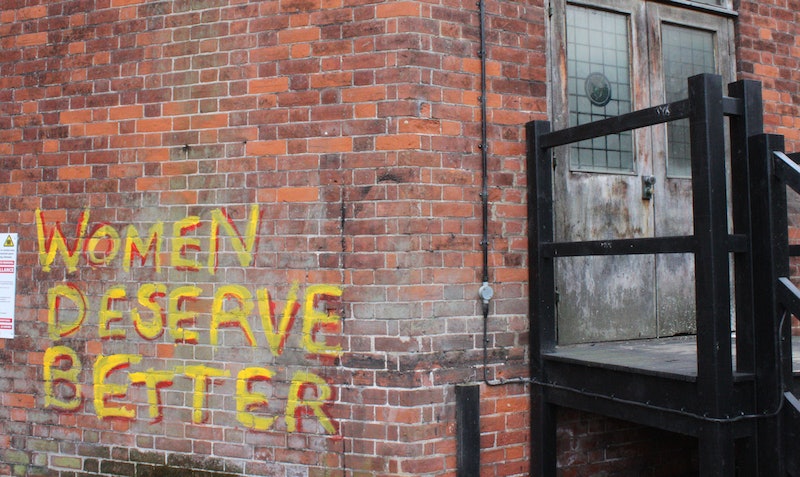 In the last few days, Indian media site Mintified has posted photos to Facebook of women holding signs attesting to the ways that the men in their lives don’t make them feel unsafe, along with the tag #BlameOneNotAll. For those of you who remember the #NotAllMen trend, the logic behind this new campaign will seem familiar: Although admitting to the fact that women ­are harassed and abused, Mintified makes the point that not all guys are, in fact, rapists. I would challenge Mintified to find anyone who actually disputes this statement; I think the vast majority of feminists (myself included) would agree that there are plenty of non-violent, non-rapey men out there, even as we protest widespread violence against women. But, just like #NotAllMen, #BlameOneNotAll completely, depressingly misses the point.

Mintified explains the thinking behind its campaign on Facebook:

We do agree that a woman has to go through a lot. The leering, the catcalls, the groping, the societal othering, the miasma of all this that women bear the brunt of every damn day. Every single day is a war to them. BUT Generalizing the other gender, is not right. Not all men are rapists. Not all men abuse their significant others. Not all men actively oppress women. And these posters say it all.

I would like to think that Mintified meant well with this campaign, and that the site is simply trying to express that there are a lot of men out there who would never support or commit sexual violence or domestic abuse. Regardless the site’s intentions, however, the #BlameOneNotAll campaign, like #NotAllMen, distorts the issue of sexual and domestic violence and inhibits any real dialogue about how to make the world a safer place for women. As Mintified made clear to Buzzfeed, #BlameOneNotAll is not associated with #NotAllMen. Nevertheless, the campaign approaches feminism in the same problematic way, deflecting the conversation away from the issues at hand – the broad cultural and societal forces that allow violence against women to continue – to instead focus on anecdotal evidence about individual men. The campaign also manages to twist a discussion about violence against women to center on men, casting them as the victims, rather than, you know, the women who have actually suffered abuse. #BlameOneNotAll misinterprets activism against rape and abuse as an attack on men in general, when, in fact, it is an attack on rapists and abusers. When women complain about the prevalence of sexual violence against women in contemporary society (in India, the US, or anywhere), the point is not that all men are rapists. The point is that some men are, that all women are therefore under threat, and that we live in a culture that doesn’t do enough to prevent it.

On a purely functional level, the #BlameOneNotAll campaign undermines its own purpose. Mintified may have wanted to show that there are a lot of good guys out there, but the campaign itself seems to unintentionally say the opposite. By having one woman point out, for example, that her uncle doesn’t molest her (“When My Parents Are Not Around, My Uncle Doesn’t Make Me Feel Uncomfortable”)—as if he deserves some sort of medal for not assaulting his own niece—the campaign casts the uncle as an aberration, rather than the norm and only highlights how truly f*cked up it is that some young women do feel unsafe with male family members.

The campaign was initiated keeping in mind the Indian scenario. There are a lot of issues women go through on daily basis. Having said that, we can’t generalize the other gender. There are certainly good men out there. And the initiative is to support this thought.

Mintified is right that there are good men out there—there are a lot of them. But by casting violence against women as a blame game, rather than the deeply ingrained, systemic cultural problem that it is, #BlameOneNotAll oversimplifies the issue of sexual violence and absolves anyone who is not actually a rapist of the responsibility of stopping rape. Rape prevention is not a matter of simply finding the right "ones" to blame. It’s a matter recognizing the cultural forces that fuel sexual violence, and dedicating ourselves—women and men—to creating meaningful change.