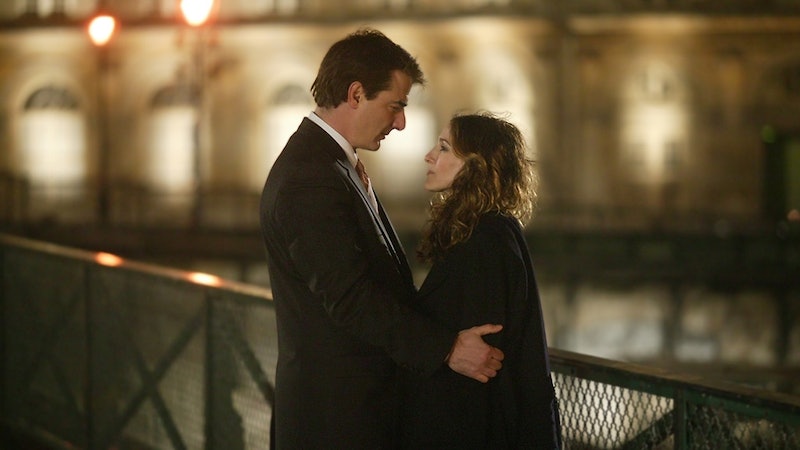 OK, so remember that scene at the end of The Matrix when Keanu Reeves realizes that he can stop bullets with his mind, and Laurence Fishburne says dramatically, “He is The One”? Awesome movie, awesome scene, and literally the only time someone should call another person “The One.” That's it. Neo is The One and the person you're dating/married to is not. Pitchforks down, kiddos—hear me out.

From a young age, many of us are taught (by movies, television, and the people around us), that, when it comes to our romantic lives, we should be searching for “The One.” “The One” is said to be the person fated to be with us, the soul mate who will complete us, the person upon whom our future happiness will depend. Our dating lives will simply be a process of sifting through the chaff while we look for the wheat, and once we’ve found the wheat—I mean, “The One”—we’ll get married and be happy forever. It’s fate, right?

I think there can be “The Person I Love So Much That I Want To Spend My Life With Him/Her,” but “The Cosmically Fated, You-Complete-Me, You-Were-Created-Just-For-Me ONE”? Nope.

Before you dismiss me as the angsty love child of Mr. Scrooge and the Grinch, I want to make something very clear: I am not trying to rag on romance. I believe the love is real, and that it can be profound, transformative, and long-lasting. I believe that, although romantic relationships shouldn’t define one’s sense of self-worth, wanting to be in love and to be loved by someone else is a legitimate, worthwhile desire. My problem with “The One” is not a problem with romance itself, but with the way that people often talk about it. “The One” may seem like a harmless title, but the words we use matter; they shape, not only what we say, but also how we think and act.

As I’ll elaborate on below, “The One” holds with it a lot of baggage, including risky assumptions about fate and agency, and fantasies that are unrealistic and unattainable. It’s a phrase that carries a great deal of unhealthy expectation that can ultimately damage and even kill a relationship. I would argue that, perhaps ironically, the idea of “The One” is actually anti-romance.

I want you all do go out and date and fall in love and be very, very happy. I think that’s something worth striving for. But, unless your S.O. is actually a prodigy sent to Earth to save us from a computer-generated dystopian future, please, don’t call him or her “The One.” Here’s why:

1. It’s too much pressure

Telling someone that he or she is “The One” puts a lot of pressure on that person to fill that role – which simply isn’t fair to that person. It also puts a lot of pressure on the relationship as a whole; if this is “The One,” then what happens when you go through a rough patch? What happens when you’re driving each other crazy? Things under that much pressure usually explode.

2. It implies that you should only need one person in your life, ever

Romantic partners cannot fulfill all of our social and emotional needs. They simply can’t, and that’s not their job. If you’re overly attached to the idea of “The One,” it can be easy to convince yourself that if you can only find this one person, then everything else in your life will fall away and he or she will make you happy. You have to make yourself happy, and that requires filling your life with wonderful, supportive people – including, but not limited to, your romantic partner.

3. It makes it seem like you were somehow incomplete before you met “The One”

The “You complete me” scene in Jerry Maguire is super romantic because it’s a compelling idea: who wouldn’t want to think that somewhere out in the universe is someone who would be able to heal all of those broken parts of you? But this idea is bad! You are not broken or incomplete! Your wholeness does not depend on someone else. You are complete, whole, and worthwhile all on your own.

Many of us have already lived through this nightmare: You’re convinced someone is “The One,” and then that person ends up being a jerk, or sleaze, or simply not who you thought he or she was. What happens then? Is “The One” meaningless? Were you wrong, or is the universe pranking you by making your “One” a horrible person? It’s difficult enough to move on from bad relationships. Adding all of this “One” baggage only makes it harder.

5. It perpetuates the idea that any relationship that isn’t “The One” is a waste

Our society has a skewed view of what it means to have a successful relationship. We define “success” in romance as “lasting until death” and “failure” as “anything else.” That’s really not fair to us or to our relationships. There are lots of relationships that are good and worthwhile for some period of time, which eventually end because they need to. Not every relationship is meant to last FOREVER, and that’s OK. It’s important to realize that when we date, we’re not just wasting time until we find “The One.” We are having new experiences, meeting new people, having fun, learning, growing, and living our lives. That’s not wasted time.

6. It might keep you from considering people who don’t fit your idea of “The One”

If you go into dating with the idea that you’ll only consider people who fit a certain idea you have of your soul mate, then you might miss out on people who could surprise you in amazing ways. You might find someone you want to spend your life with – but who, at first meeting, didn’t seem like “The One” material.

7. “The One” casts romance as a matter of cosmic destiny – and therefore doesn’t need work

When people feel like their romantic lives depend entirely on fate – that there is some perfect match out there just waiting for them – they can fall into the trap of assuming that, if the person is “The One,” then the relationship will be easy. If it’s difficult, then it’s just not “The One,” right? All relationships take work, even when two people love each other madly. If you assume that difficulty means it’s not “The One,” then you’re going to be searching for “The One” forever.

The idea of “The One” positions people in relationships as fundamentally passive. Fate put them together, they’re soul mates, and they have no control over it. But you aren’t passive: You are an independent, thinking person, and you make choices about your life and your needs. I know that the idea of soul mates and fate and “The One” is romantic, but isn’t choice romantic, too? Think about it: You haven’t been struck by some cosmic love lightning. When you commit to someone, you are choosing to spend your life with that person; you are actively deciding that this person will be your family and your priority for the rest of your life because you love him or her that much. What’s more romantic than that?

9. “The One” imposes a fantasy on your partner

Your S.O. is a fully-fledged person who exists alongside you, not for you. If you are convinced that this person is a mythical “One,” then you’re placing your fantasies about what that term means onto him or her. What if s/he doesn’t fulfill those fantasies? Does that mean s/he isn’t right for you? Your partner is not “The One”—he or she is simply “Mark” or “Ian” or “Jennifer” or “Neo.” Let that be enough.