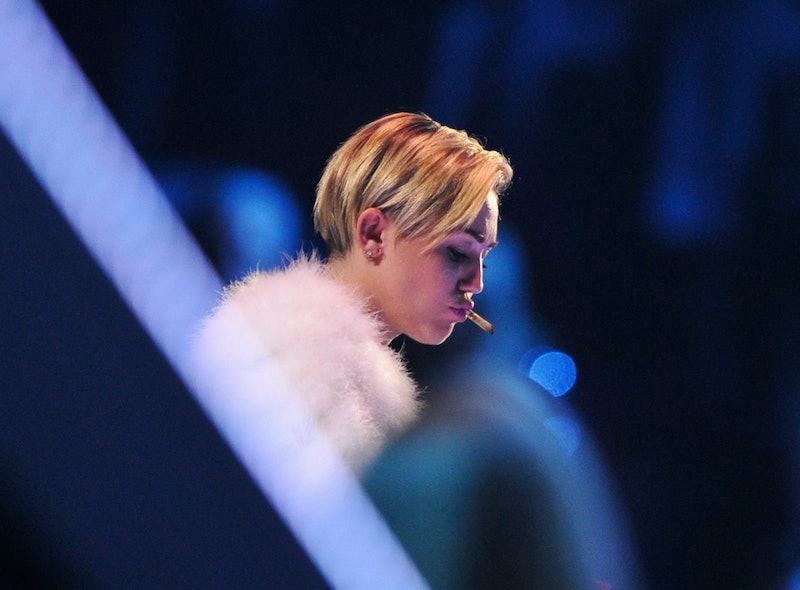 Lol, Miley Cyrus. Lolllllll. When it was announced that Miley Cyrus would be performing at the MTV European Music Awards, we theorized as to which inanimate objects should move out of the way of Cyrus' apparent quest to get in as many headlines as possible for destroying America's youth. We would just like to point out that "weed and/or other drugs/drug paraphenelia" was totally on that list. So when we saw that Miley Cyrus had lit up a joint on-stage at the EMAs, our first reaction was to fist-bump ourselves and whisper "we told you so" at the Internet. (Yes, we're that cool.)

What else did you expect from Miley Cyrus in Amsterdam? Did you expect her to not publicly smoke some pot while she was there? What are you, new?

Cyrus was making her way to the mic to accept the award "Wrecking Ball" had just won for Best Video when she lit up the pot. People don't seem to realize that one of the only other ways this situation could've gone was with her naked onstage with Terry Richardson and we'd rather that not happen. Still, people are upset.

"No one was expecting it to happen," one source told Us Weekly, presumably while clutching their pearls and suppressing an eye-roll. "It was so brazen, so shameless. It was so uncalled for."

Brazen and shameless? No way! Uncalled for? Has anything Miley's done in the past year been called for?

Insert "When in Rome" here with Rome replaced with Amsterdam, etc.

This is Miley Cyrus we're talking about. The exchange she had with Katy Perry about the location of the awards says it all (and is actually kind of adorable):

More like this
Is Megan Fox Pregnant? MGK Gave A Shout-Out To Their “Unborn Child” Onstage
By Hugh McIntyre
On TikTok, Miley Cyrus’ “Malibu” Is The Soundtrack Of Growth
By Courtney Young
Britney Spears Met The Weeknd & Sam Levinson, So She May Actually Be On 'The Idol'
By Jake Viswanath
Taylor Swift Knew Hayley Kiyoko & Becca Tilley Were Dating 4 Years Ago
By Grace Wehniainen
Get Even More From Bustle — Sign Up For The Newsletter