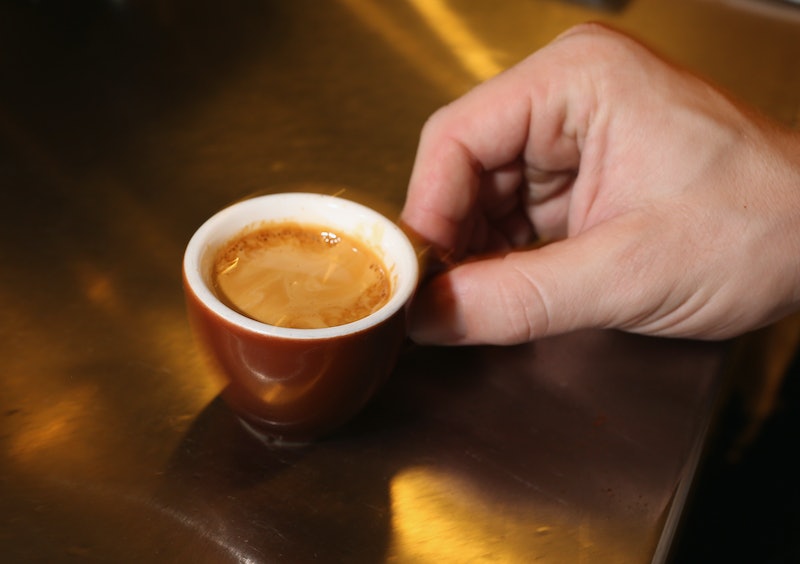 I'm a huge fan of caffeine. Like, huge. So much so that I've frequently asked myself, how much coffee is too much? Well, apparently, it's okay to drink up to five shots of espresso a day, according to the European Food Safety Authority. Not only did EFSA research recently conclude that consuming up to 400 milligrams of caffeine a day poses no health risks for a healthy and non-pregnant individual, but so do previous studies released from the Mayo Clinic. This is beautiful, because I was afraid it was too good to be true.

Keep in mind this study focuses on straight caffeine intake, not taking into account the other ingredients in energy drinks and shots — energy drinks tend to be loaded with sugar and artificial preservatives. But even allowing for that caveat, this study is still pretty awesome news. The best part? It found that the average daily caffeine intake among European adults aged 18 to 65 ranges between 37 and 319 milligrams, while for adults in the U.S., it's between 200 and 300 milligrams. So what you're saying is, this basically means that I can drink more coffee than I do already? Yes, please! Sign me up!

Okay, I won't get ahead of myself. But it's still pretty nice to hear that I can stop worrying that my heart is going to explode when I'm on a third shot of espresso in a day. In fact, there have been numerous studies that say people who drink moderate amounts of coffee are less likely to develop certain illnesses like cardiovascular disease and stroke than people who didn't drink coffee at all. In fact, earlier this year a new study conducted by researchers at the Imperial College of London found that women who drank three cups of coffee per day lowered their risk of cancer by 19 percent compared to those who drank less than a cup per day.

So how many actual cups of caffeine can I drink? Well...it depends. According to the EFSA report, "A single espresso contains around 80 milligrams of caffeine, the same as a standard can of energy drink such as Red Bull, while a black tea has around 50 milligrams and a can of cola 40 milligrams." As such, the number of beverages that will add up to 400 milligrams of caffeine will vary depending on what you're drinking. Curious about how much caffeine is in your drink of choice? The Mayo Clinic has you covered, so head on over there to get the facts you need.

Drink up, my friends — but do keep in mind that consuming excessive amounts of caffeine can be detrimental to your body. You can experience insomnia, anxiety, and even cardiac arrest.

So let's keep it under that 400 milligrams mark, shall we?